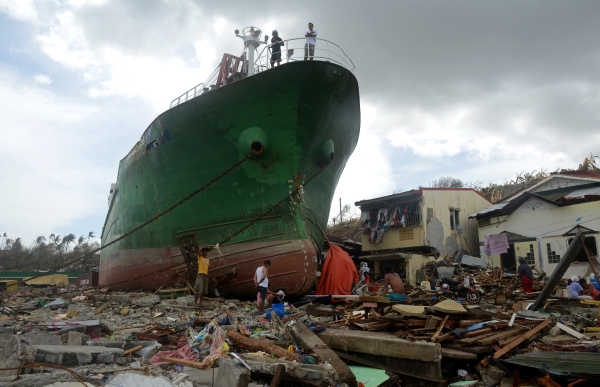 People walk among debris next to a ship washed ashore in the aftermath of Typhoon Haiyan at Anibong in Tacloban, the Philippines on Nov. 11, 2013. Photo: Noel Celis/AFP/Getty Images.

More than 10,000 people are feared dead after Typhoon Haiyan (Yolanda) caused widespread devastation in the central Philippines on Friday and Saturday.

In the worst affected areas, communications systems have been wiped out; roads, ports and airports remain closed, and hundreds of thousands of displaced people are struggling to find clean water, food and shelter.

Lufthansa has lent its hand to the relief effort by sending 25 tons of aid free of charge on one of its wide-body jets to Manila to speed up delivery of emergency supplies to affected areas. “In catastrophes, every hour counts in the provision of aid and the logistics are paramount,” said Karl Ulrich Garnadt, Lufthansa Cargo Chairman.

Mitsui O.S.K. Lines, Ltd., has announced plans to make a donation of US$30,000 to aid those affected by the typhoon in the PhilippinesThe main portion of its donation will go to those on the island of Leyte, through the group company Magsaysay MOL Marine, Inc., a Manila-based seafarer manning company founded in 1997 as a joint venture with Magsaysay Maritime Corp. MOL said it is planning other relief efforts as the situation unfolds.

Aid agencies warn that more lives are threatened because of the logistical difficulties of reaching the coastal regions of Central Visayas, particularly Samar and Leyte provinces. In Tacloban, population 222,000, over 70 percent of the city’s buildings have been destroyed.

However, outside the immediately affected areas, the country is returning to something close to normality.

Cebu is still suffering from intermittent power and communication system failures, but the airport and port are now open and being used to help with the humanitarian effort, although flights to Tacloban and Roxas City have been canceled.

TNT reported that it had now reopened its Cebu depot, its employees were safe and operations were returning to normal.

DHL Express operations in Cebu, where most of its customers are based, are back to normal, but operations in heavily affected areas — particularly Tacloban, Samar, Ormoc and Kalibo — remain suspended. DHL Supply Chain’s Cebu operations have resumed.

UPS said all its employees in the Philippines were accounted for and no damage has been reported to its facilities. Services to affected areas have been suspended until further notice, but operations in other areas of the country are now operating as usual.

“With severe damage to lives and property caused by Typhoon Haiyan, UPS is balancing our priorities of employee safety and customer service,” the company said in a statement.

“UPS is committed to moving shipments to their final destinations as quickly as possible, and we are making every effort to deliver to all areas as soon as conditions safely permit.”

After passing through the central Philippines over the weekend, Haiyan made landfall in northern Vietnam last night rather than in central Vietnam as predicted. Despite losing some of its force and being downgraded to a tropical storm, it was still generating winds of 100 miles per hour when it hit Vietnam’s coast.

A Maersk spokesperson said that the ports of Quy Nhon and Da Nang in central Vietnam had not been affected by Haiyan. Hai Phong in the north was hit by strong winds and heavy rain but has now resumed operations.

Xavier Demay, Vietnam Country Manager for Swiss forwarder Panalapina, told the JOC that its operations in the North were continuing as usual with little disruption and few flight delays.

“There was no disruption in Central Vietnam either, because in the end Haiyan did not hit that region directly,” he said.

“Today, Da Nang International Airport and the port of Qui Nhon have returned to normal operations. However, due to congestion, feeders have a 2-day delay against original schedule. We do not plan to reroute cargo as this will be solved soon.”

China’s southern provinces of Hainan Island, Guangdong and Guangxi were making preparations for Haiyan to reach them this afternoon and evening local time. In Hainan more than 200 flights were canceled and 400 ships called back to port.

Maersk said that — as of 6 p.m. local time — there had so far been no impact on South China’s ports.