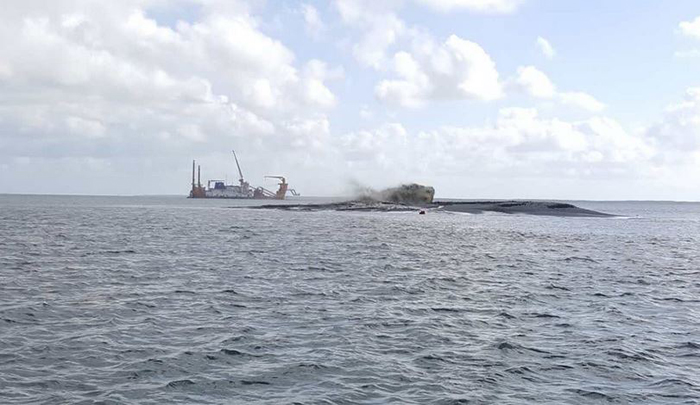 Land reclamation for the Lamu port, pictured, began in mid-October.

Kenya’s second international seaport will open for operations by 2020, according to a report by Chinese state media.

The port at Lamu, around 340 kilometers (211 miles) northeast of Mombasa, east Africa’s main port, is being built by China Communications Construction Company, which is investing nearly $480 million in the construction of three berths at the port.

The Chinese company and the Kenya Ports Authority signed an agreement for the construction of the port in August of 2014. When complete, the new port, which is part of Kenya’s Lamu Port Southern Sudan-Ethiopia Transport Corridor, or LAPSSET, project, is expected to rival Mombasa in scale and throughput.

As well as its direct hinterland, a primary aim of the new facility is to include highways linking Kenya to the southern regions of the landlocked states of South Sudan and Ethiopia.

Dredging and reclamation works under the first phase of the project have already commenced, a KPA spokesperson told state media.

KPA has forecast throughput at the port will reach 23.9 million tonnes (26.3 million tons) within 10 years of operation as it competes for cargo with the ports of Sudan, Djibouti, and Mombasa.

KPA recently announced a task force to investigate double-digit declines in transshipment volumes at Mombasa, which in September inaugurated the first phase of its second container terminal.

The terminal is one of a series of major projects aimed at improving the port’s competitiveness for east Africa’s transshipment and gateway business. Phase one increased the port’s container capacity by 550,000 twenty-foot-equivalent units, and two more phases are planned that will eventually bring total capacity to 2.5 million TEUs.

Japan is the primary foreign investor in Mombasa, which is east Africa’s largest seaport and the continent’s second-largest by cargo tonnage and container throughput.

Earlier in the year Kenya signed a deal with CCCC to build a standard gauge railway connecting Naivasha and Malaba in the interior of the country.