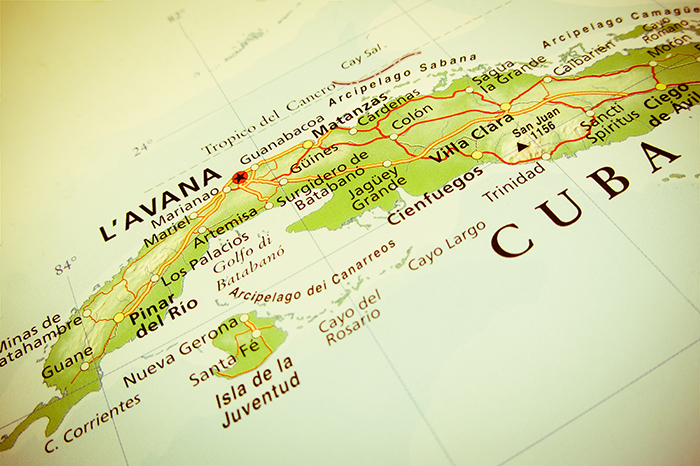 Phil Peters, president of Cuba Research Center, a nonprofit organization in Alexandria, Virginia, says the U.S. and Cuba have been making progress in normalizing their diplomatic and trade ties, and overcoming political opposition within the United States to the Obama administration’s clear desire to end the U.S. trade embargo of Cuba. “I choose to be optimistic,” Peters said. After all, we are talking about a relationship with 50 years of some pretty heavy baggage on both sides. The first step is taking a while, but that doesn’t particularly discourage me.”

Peters, a Cuba specialist who spent most of February on the island, told a March 23 webinar on the U.S.-Cuba relationships, sponsored by the Inter-American Dialogue, that the Cuban government is now managing expectations about what comes next, following the sweeping, surprising announcements made by the Obama administration last December. The Cuban government is now “taking great pains to explain exactly what was done and what was not done,” including the “reach of the change in the travel regulations and the change in the trade regulations” in order “to enumerate all the parts of the embargo that are still in place.”

“I think the Cuban people are delighted with what has happened” over the past few months,” Peters said.

The Cuban people appreciate the fact that President Obama in his speech last December made it clear the U.S. wants “prosperity” for the Cuban people; that the U.S. doesn’t want Cuba to be a “failed state,” Peters said. Obama invited the U.S. Congress to end the embargo. Although his executive actions are limited by his executive authority, “he made it clear that he disagrees with the animating idea about the embargo, which is to weaken the Cuban economy and force political change,” rather than make Cuba wealthy enough to become a full-fledged member of the global trading community. “So it is quite a departure.”

Peters added, “The regulations President Obama issued a month ago are, I think, very well done. They’re clearly written by a president who would like to see the embargo go. He took his authority as far as it could go to make it easier for Americans to travel to Cuba; and to make it easier for American businesses to involve themselves in the travel business. And in every instance to do so without having to write the Treasury Department and wait for them to mail you a license back. It is all by what Treasury calls a ‘general license’ — and in trade relations to [enable] the exports that are permitted [to be] done under what the Commerce Department calls ‘license exceptions,’ which allow exporters to self-execute.

“The first step is going to wind up being two steps, I believe. We are going to get full diplomatic relations, and the Obama administration will have completed its process of notifying congress that Cuba is no longer on the list of state sponsors of terrorism — another long overdue thing. Like any opportunity, this is what we make of it. For those of us who’d like to see the relationship with Cuba prosper — for many reasons, including that Cuba is approaching a period of great change and generational leadership — the opportunity is in front of us, and we have an opportunity to engage” with Cuba. “I hope we’ll seize the opportunity.”

Devry Boughner Vorwerk, vice president, corporate affairs at Cargill, the global agribusiness giant, said Cargill has “always been against unilateral sanctions in agricultural trade.” In 2000, Cargill and other firms worked hard to “make sure that there was an opening for humanitarian food trade to Cuba, and we shipped one of the first [such] vessels to the port of Havana. Since then, Cuba has been a customer of Cargill.”

Nevertheless, “I have realized that it is very challenging in Cuba, given some of the credit restrictions that we have placed on U.S. farmers and U.S. exporters. We hit a peak in 2008 with about $700 million in U.S. exports that year. This year, we’re down to $300 million.” Vorwerk said she thinks the Cuban market has the potential to be “about a $2 billion market.”

However, because of the self-imposed U.S. trade embargo, Vorwerk said, “We’ve seen that countries like Brazil, and countries from the European Union and even Vietnam have been taking that market share away from U.S. farmers. We think that it is quite a shame that U.S. farmers have their hands tied behind their backs.” The U.S. is trading barely any meat — and there’s no rice — into Cuba. “But we have great hopes that at some point we’ll be able to do what we do best: to ship U.S. commodities and high-value food products to Cuba.”

Vorwerk added, “We recognized that there is a great need for initial investment. The Cubans see that “it is in their best interests to diversify the FDI that is coming in. And charting their own course.” On Jan. 8, 2015, Cargill helped launch the U.S. Agricultural Coalition for Cuba. “People said that we launched it because of the president’s announcement, but that was not true. It was planned long in advance [in May 2014]. We started it with about 20 organizations as members, but since the president’s announcement, we are up to well over 80 organizations.”

Vorwerk said the president’s announcement has made the U.S. farm and agricultural community aware that Cuba could return to being a significant market for U.S. agriculture exports. Companies are saying, “We want to do the right thing; we want to end the embargo.”

Although it was very clear since last May that forming this coalition was aimed at ending the embargo, the members had no idea that the president was going to “make such an expansive announcement. We made the decision that we weren’t just going to go for fixing the credit issue, or for one-way trade with Cuba.” There is great potential for two-way trade, she said. “It doesn’t make any sense to ship [American] food to people who can’t afford it. We’d like to see development take place” in Cuba, so that people can increase their choices “as opposed to being stuck in the situation they are in.

“We believe that even on the Hill [in Congress], there is broad bipartisan support for what we are trying to achieve,” Vorwerk said. “There are some important people who believe the opposite of us. We know that not everyone agrees with us, but for the most part, if you look at opinion polls across the United States, the majority of Americans agree with what we are trying to achieve, which is to end the embargo.”

John Epstein, a partner at the law firm Holland and Knight, said that “the flood gates have opened.” Although “the actual changes in regulations are not that big” yet, his firm has been contacted by a wide range of firms – including in such sectors as aviation, hotels, and cruise lines – who are newly interested in preparing the way to invest in and/or trade with Cuba. Epstein, who has assisted both U.S. and non-U.S. clients with compliance issues related to the embargo with Cuba since the late 1990s, said that “the Obama administration has been very good at using the gradual relaxation of sanctions as a foreign policy tool” — not just with respect to Cuba, but with countries such as Iran and Burma (Myanmar).