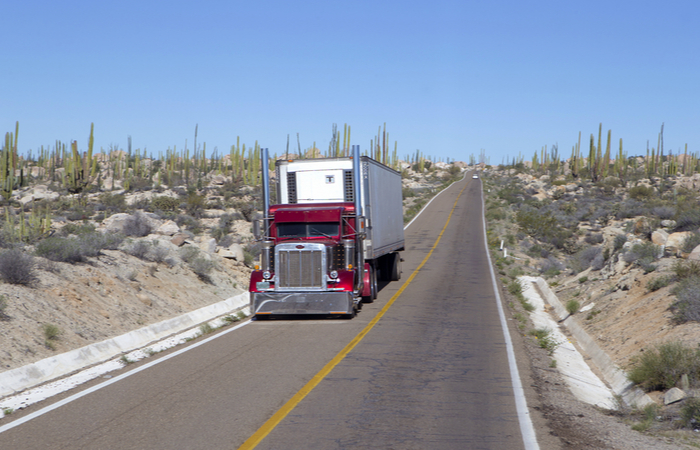 A Mexican digital platform helps small trucking companies to get access to shippers looking to move cargo, according to the owners of the platform, Sendengo. Photo credit: Shutterstock.com.

Cargo shipments booked through a Mexican digital platform that makes it easier for shippers to contract transportation services in the country’s extensive mom-and-pop trucking sector quadrupled over the last two years with a strategy the broker says brings speed and transparency to the process.

Shippers that contract through the matchmaking platform, called Sendengo, input details of where they want to move cargo and how much they want to move, and truckers respond by submitting proposals for moving the cargo, said Marco Reyes, CEO of the Mexico City-based company.

The digital platform, which was launched in 2015, has attracted 15 shippers including Unilever, Kimberly-Clark, Clorox, and Office Max, according to Sendengo. The platform handled 3,500 shipments last year, more than quadruple the 750 shipments handled in 2017, company officials said.

By making it easier for trucking companies to connect with larger shippers, the platform — which is also available on a phone app — increases shippers’ accessibility to truckers, Sendengo officials said, adding the average trucker they deal with has three trucks. According to data compiled by Mexico’s Secretariat of Communications and Transportation (SCT), just under a quarter of Mexico’s 983,000 trucks were owned by companies that had five or fewer vehicles in 2018, and about 30 percent were owned by companies that had between six and 30 trucks.

The platform works in a similar fashion to digital brokers such as Convoy and Uber Freight, which are among several products in the United States that use digital methods to execute elements of the trucking business, such as customer and capacity acquisition, cargo and asset visibility, and customer relationship management. The high interest in digital trucking brokerages was demonstrated in November when Convoy received a $400 million funding round of venture capital funding from a combination of new and existing investors, taking the company’s total funding to $665 million.

In Mexico, there is only one other similar online platform, called Liftit, said Reyes. Liftit originated in Colombia and has expanded to Mexico, Chile, Ecuador, and Brazil, focusing mainly on last-mile deliveries, using small trucks and vans, according to the Liftit website.

Because shippers pay Sendengo a flat fee of 15 percent of the transaction cost to use the platform, both shippers and truckers know exactly how much the move costs, Reyes said. Without a platform that can bring visibility, shippers in Mexico often turn to a “coyote,” or middleman, to find trucking services, and neither shipper nor trucker knows exactly how much the coyote is taking for his fee, he said.

The platform also enables Sendengo to assign work swiftly, sometimes allocating jobs to a trucker within an hour and getting a truck to the warehouse by the next day, or even late the same day, said Miguel Salazar, Sendengo’s COO.

“At first we tried to optimize for price,” he said. “We thought that the lower the price, the more customers we would get. But we found a different insight. We found that it is actually the speed of booking a shipment that customers respond better to.”

The company’s focus on the small trucking sector includes the launch last December of a platform feature in which the carrier is paid immediately by Sendengo, which in turn is paid by the shipper.

Sendengo expects to launch a program in March in which smaller truckers can secure financing for a new vehicle from one of Mexico’s truck manufacturers, with the backing of Sendengo, said company spokesperson Ligia Angulo. The carrier would sign an “exclusivity agreement” with Sendengo, which in turn would guarantee that the carrier will get enough work and income each month to repay the financing, she said.