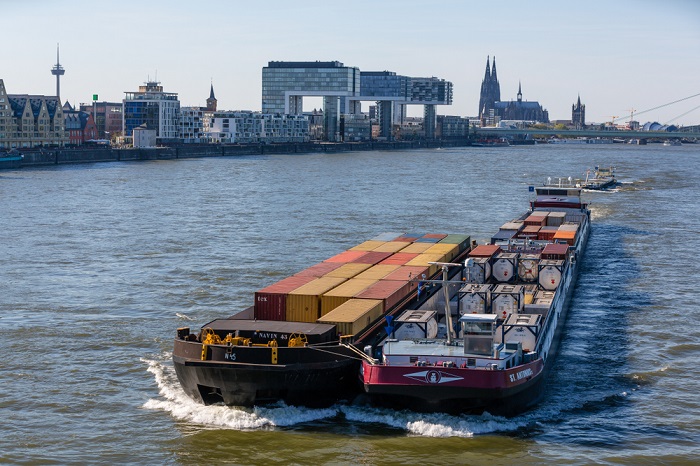 The low water has stopped all barge transport on a huge section of the critical European waterway stretching between Kaub and the Swiss town of Basel, leaving high and dry shippers scrambling for truck transport that is in critically short supply. Photo credit: Shutterstock.com.

Containers are stacking up at terminals along the Rhine in Europe with the water level on the Rhine River at the German town of Kaub, near Frankfurt, today falling below 30 centimeters (11.8 inches), less than a third of the draft needed to float even a small, empty barge.

The low water has stopped all barge transport on a huge section of the critical European waterway stretching between Kaub and the Swiss town of Basel, leaving high and dry shippers scrambling for truck transport that is in critically short supply. Low water surcharges by some barge operators on the Middle and Upper Rhine are as high as €900 per TEU ($1,021 per TEU) and road freight rates are soaring, but the high prices make little difference if the boxes are stranded.

“The cost is one thing, but if it is physically impossible to move a container, it doesn’t matter what shippers pay,” said Maira van Helvoirt, chairperson of European inland waterway association LINc.

Van Helvoirt told JOC.com that containers were stacking up at terminals along the river and because of the volume, there was very limited road and rail capacity available as an alternative.

“Shippers are facing serious issues in keeping their supply chains running. Barge operators are trying to improvise by shuttling by truck to other terminals, but it is very expensive and if there is no capacity it obviously won’t help,” she said.

An IHS Markit report said consumer supply has been complicated by the low Rhine water levels, and manufacturers such as BASF and Solvay, being deepest inland, were not able to receive raw materials. Solvay has not taken delivery of raw material shipments by barge since Oct. 16, and BASF declared force majeure for some nylon products coming out of its Ludwigshafen plant.

“Demand is greatly increased, and there is finite road and rail capacity, exacerbated by a shortage of truck drivers. This has certainly increased rates, particularly for ad hoc bookings and special movements,” he said.

Atlantic Container Line (ACL) said in a customer advisory that the low water meant the intermodal provider would not have the ability to offer barge-truck moves, even as shipper requests for truck transport has quadrupled for the next few weeks.

“All one-way truckers are fully booked for the next couple of weeks as this is a general issue in the market,” ACL said. The advisory noted that “guaranteeing carrier haulage delivery and pick-ups on a timely basis as part of a through rate is extremely difficult.

“Accordingly, please note ACL cannot be held responsible for any third-party costs that may be associated with our inability to secure adequate truck power to deliver or collect shipments, or spot containers.”

Rain is forecast for next week (Oct. 29-Nov. 3), and while Van Helvoirt said this was very welcome, she outlined just how much the water level needed to increase before normal barge operations could resume.

A small barge has an empty draft of 90 centimeters, while a large empty barge requires at least 1.3 meters of water depth. A large, fully laden barge with 400 TEU to 500 TEU needs a draft of 3 to 3.5 meters to safely navigate the river, she said.

Even if the rain falls as forecast next week, it is expected to raise the level of the Rhine River at the town of Kaub to just 42 centimeters.