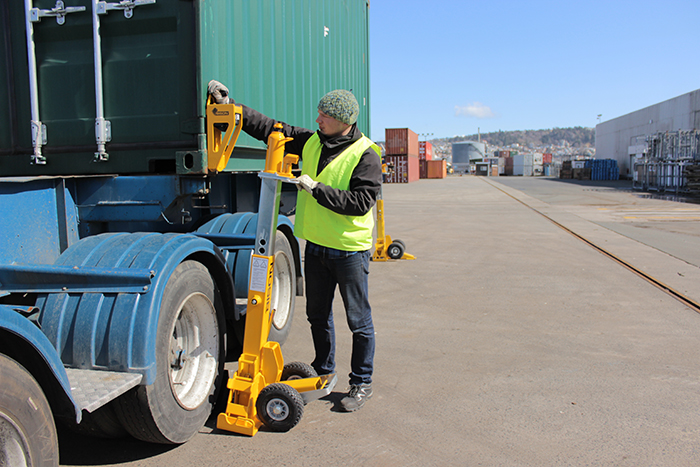 The Bison C-Legs, pictured, have helped with SOLAS compliance and found other unexpected uses.

A New Zealand company has launched a relatively small, portable scale designed to enable shippers to weigh a container atop a chassis, saying it will help shippers comply with new global container weight rules.

Bison launched its C-Legs in October, and is opening a European office in Maastricht, the Netherlands, this month. It is putting together a European network of resellers to promote the scale, which costs about 13,000 euros ($14,400) in Europe. The launch follows the release in May 2015 of Bison’s C-Jacks — a small car-jack-like device that can weigh a container sitting on the ground, and was conceived to meet the demands of the the International Maritime Organization’s Safety of Life at Sea, or SOLAS, convention.

Since then, however, other reasons for using the scales have emerged, and driven customer interest and sales, said Greg Fahey, CEO of Bison. For example, some customers use the scales as a way to check the balance of a container in preparation for shipping via rail, said Fahey, who pointed out a balanced load is required by rail operators in some parts of the world.

Fahey, who founded Bison with his brother, hopes that similar interest and unique uses will drive sales of C-Legs.

SOLAS, under which shippers must report the weight, otherwise known as the verified gross mass, of all goods shipped by sea prior to loading on the vessel is still an issue with some customers, Fahey said.

The SOLAS requirements have generally been accepted, and complied with, since they were enacted in July, and by the time a 3-month grace period expired in October, up to 95 percent of containers moving globally had the needed VGM data.

Yet, there were still some concerns over compliance holdouts, IT issues, and the accuracy of the declarations — problems that some observers say tend to surface in corners of the globe that lack the necessary equipment.

C-Legs is a broadly similar product to C-Jacks, but reaches higher in the air, to the top of a chassis. The new scale has a leg for each corner of the container that is raised with car-jack-like devices to measure the weight of the container. Each leg is fitted with an electronic scale and the weight from each is then transmitted to a smartphone application that combines them into a single weight for the whole container.

Fahey said the C-Jacks, which sell for about 10,000 euros in Europe and are now available in about 20 countries, have proven attractive to shippers and other companies in the many countries that have weight limits on containers transported by road. The scales enable them to “optimize the weight,” and pack in as much cargo as possible, “but stay under the limit,” he said.

For example, import containers entering Australia that are overweight “are put to one side, and they may need to be repacked — which is expensive for the shipper,” he said.

Outside of the US these

Permalink Submitted by ferrullig@minds... on Nov 4, 2016 11:50AM EDT
Outside of the US these devices are likely helpful for SOLAS compliance; within the US they aren't needed. By several State and Federal laws, not SOLAS, you can't move freight across the street with knowing the weight of the goods being shipped. The weights of the containers is now easily accessible, so SOLAS requirements are fulfilled. If it make you feel better to weight the shipments, do it, but it isn't needed here.