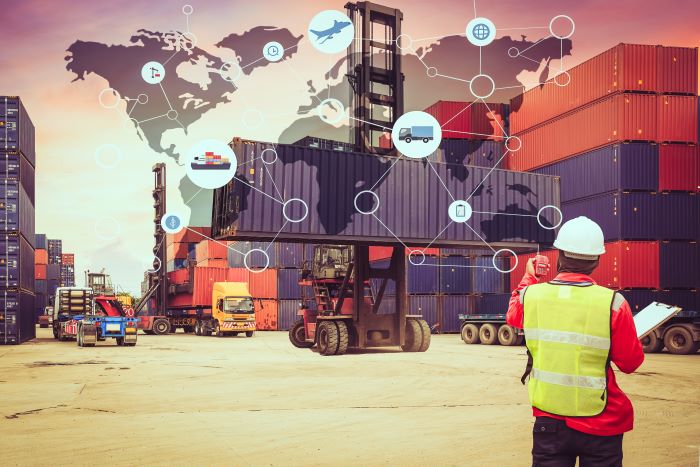 While it remains to be seen how far government regulatory reforms in the works will help transform Indian freight transportation historically marred by opacity and other inefficiencies, technology-driven forwarding marketplaces are rapidly stepping up their offerings and reach to break into the country’s relationship-based nature of international logistics.

Chennai-based FreightBro is seen as a front-runner in that encroachment by digital brokers on traditional freight forwarder markets. In a statement to JOC, the budding tech startup outlined how it is shaping up its growth strategy, noting technology has become a defining factor for the future of logistics in India as the economy expands.

“Technology is the core of innovation and the only means to devise solutions to all industry related inefficiencies,” Raghavendran Viswanathan, CEO and co-founder of FreightBro, said. “Whether you are tracking your shipments, or managing operations or the workforce, or using analytics to make critical business decisions, the technology used to optimize your supply chain should essentially solve a problem.”

Besides constantly enhancing functional capabilities, the company has in the past month concluded several global strategic agreements that it believes will offer customers greater market access along with instant rate quotes and in-transit visibility.

Close on the heels of signing up as a digital partner for Germany’s port of Wilhelmshaven, FreightBro has become the first Indian startup to join the “Digital Hub Logistics Hamburg,” a platform designed to support digital transformation that already features the Hamburg Port Authority, Lufthansa, DAKOSY, Volkswagen, Shell, HHLA (Hamburger Hafen und Logistik AG), and the city of Hamburg.

“Joining hands with Digital Hub is a strategically sound decision for us and is the perfect platform for us to connect with the right partners in Germany and plan future expansion in the European market,” FreightBro said.

In addition, FreightBro inked a cooperation deal with the National Association of Freight and Logistics (NAFL) in Dubai by which it said more than 400 forwarding members in the Middle East logistics hub “can now access import rates of China and India on the go and book shipments instantly.”

“Given the fragmented nature of the industry, inefficiencies are abundant. For instance, for processing a single sea shipment as many as hundreds of mails are exchanged between numerous parties involved in the process,” Viswanathan said. “These inefficiencies are attractive to problem solvers and thus, technology has a key role to play.”

The company portrays itself as a more user-friendly, efficient platform to provide real-time cargo flow information to all stakeholders. “Consumers love the type of business that values transparency because that is what delivers exceptional end-user experience,” Viswanathan added.

The company also said it enjoys preferential rate contracts with most of the major container carriers operating in trades to and from India. FreightBro was founded in 2016, and the digital platform boasts more than 1,200 regular customers. The online marketplace has processed 6,000 TEU of shipments over the past year, the company said.

Following in the footsteps of global tech peers such as Freightos and Flexport, an array of ocean freight portals, mostly developed by startups, have entered the Indian freight landscape in recent years, trumpeting pricing transparency and shipment visibility. Still, they have much ground to gain to be able to seriously challenge traditional counterparts. Shipwaves, FreightCrate Technologies, and Cogoport are some of the other notable names in the burgeoning crop of digital freight brokers in the country.

As that digital shipping race slowly heats up, many “mom-and-pop” freight brokerages are turning to software-as-a-service (SaaS) solutions providers to equip themselves with the tools to remain relevant in a rapidly evolving global transportation ecosystem.

Two such broker-enabling software providers are ClickPost and Locus. Founded in 2015 as an express delivery aggregator and remodeled into a logistics intelligence platform in 2017, ClickPost claims to have more than 100 shipper customers, including some large industry groups. “ClickPost provides four layers of tech integration to its customers starting with an ML [machine learning] driven decision-making engine that helps select the best logistics partners based on the business objective,” Naman Vijay, CEO and co-founder of ClickPost, told JOC.com. He said the SaaS-enabled marketplace is processing over 8 million shipments per month.

The transformation from paper to a more digitized mode has lately occupied a priority spot in the Indian government’s policy actions intended to bring down logistics costs that act as an increasing drag on the country’s trade development. A collaborative digital platform for port services currently in the final stages of industry adoption is at the fore of that effort. However, the pace of regulatory moves aimed at eliminating intermediary costs remains slow as the government has had to soften the enforcement of a standard operating procedure (SOP) toward that end following pushback from forwarder groups.

Global Shipping Outlook: A Sneak Peek at 2021
Port Performance North America: Managing Cargo Flow During a Pandemic — and Beyond
END_OF_DOCUMENT_TOKEN_TO_BE_REPLACED