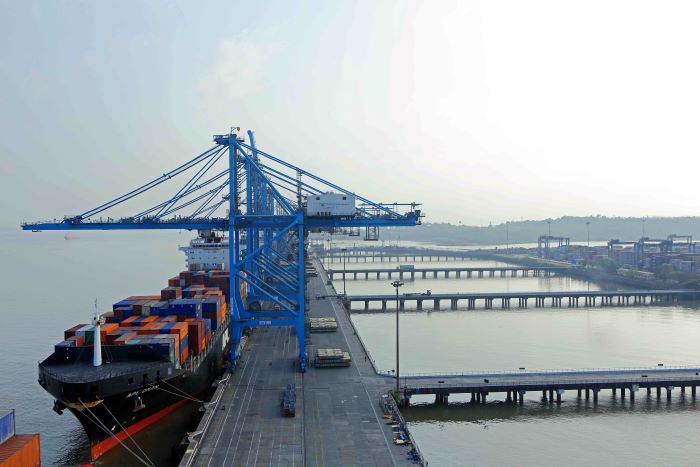 Looking to connect freight beyond Indian waters, the IPA plans to reach out to Abu Dhabi Ports (ADP), which operates the United Arab Emirates’ flagship Khalifa Port, for a partnership in logistics, according to industry sources. The ADP launched a digital client portal dubbed “Maqta Gateway” in 2016 — touted as a first in the Emirates’ supply chain ecosystem — after Khalifa opened to commercial operations in 2012.

A successful integration between the two global digital networks holds considerable significance, given the fact that Khalifa has lately become a major transshipment point for Indian cargo as more mainline carriers introduced direct calls at the port. Khalifa saw container volume surge 82.4 percent year over year in the first half of 2019, to 1.1 million TEU, according to data from the port operator.

When contacted by JOC.com, PCS technical leader Portall declined to identify any global partners currently under consideration but confirmed broader integration efforts are in the offing.

“We are actively discussing PCS1x integration with global port community systems. This is in line with the [Indian] government’s desire to have more transparency in trade to and from India,” Portall said in a statement to JOC.com.

In addition, the technical agency said data integration between Indian Customs’ gateway (ICEGATE) and PCS 1X via an application programing interface (API)-based connectivity to facilitate real-time interaction remains a high priority for the government, with a targeted completion timeline by the end of the year.

PCS use on the rise

The Indian government is staking a lot on PCS developments as it works to lift its trading-across-the-border competitiveness ahead of the World Bank’s 2021 global evaluation report. Officials from the Ministry of Shipping, the IPA, and Portall have been holding consultations with port leaders, especially private ones, and other stakeholders to fix industry adoption and data standardization issues.

Thanks to those efforts, the PCS onboarding process has gained appreciable traction in recent weeks with the user count up to more than 19,000, according to Portall.

Notwithstanding the latest economic headwinds fueled by geopolitical factors, India is widely seen as a relatively lucrative trade lane for all types of cargo — dry, refrigerated, and oversized.  Container volume shipped in and out of India’s major public ports was up 7.5 percent to 4.3 million TEU during April-August, according to a JOC.com data analysis.

As technology rapidly finds its way into Indian freight transportation amid ever-evolving industry demands — where integrator-focused offerings have now become a big draw — a potential PCS-Maqta integration can prove to be a boon for trade to and from India.