How technology like Pokémon Go could capture supply chains

How technology like Pokémon Go could capture supply chains 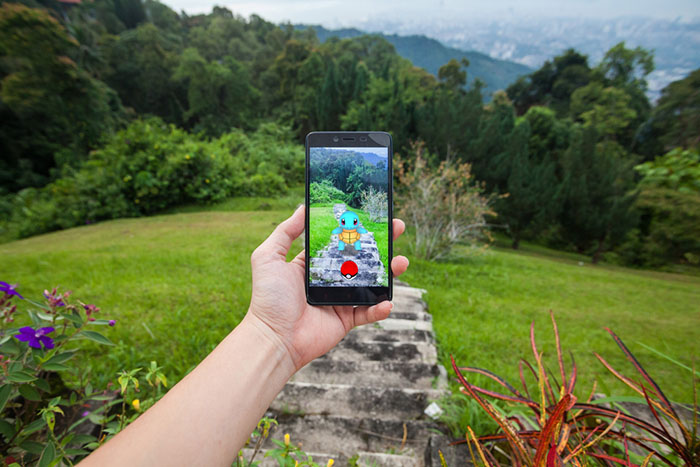 Pokémon Go, pictured, may have introduced the world to "augmented reality," or the imposition of digital renderings and information upon live video images, but the wider adoption of the technology by industry is where it will have the biggest impact.

One day in the not too distant future, truck driver Jane Doe arrives at a multi-facility logistics park for a pickup. A tablet mounted on her dashboard has a three-dimensional map of the facility on its screen, and as she arrives at the gate several icons appear. One shows her which building and dock door to proceed to and provides driving instructions to the exact location.

At the loading dock, she removes the tablet from its mount and points it at the freight waiting to be loaded, automatically switching on the device’s camera. Data begins to appear on the image of the freight she sees on screen, telling Doe its weight, dimensions, and destination, as well as any special requirements. The system also tells her how long it will take to load that freight and gives her a departure time. A digital bill of lading pops up that requires her thumbprint — and she’s good to go.

If that imaginary logistics application sounds a bit like Pokémon Go, the wildly popular game developed by Niantic, Inc. that overlays a virtual world of fictional creatures onto maps and images of the real world using mobile phones and digital cameras, that’s because its concept is based on the same “augmented reality” technology behind the success of the game. As its name implies, the technology augments or adds to “reality” by allowing users to see or interact with virtual images, sounds, and data imposed on maps or images of actual locations and objects. That’s driving growth in gaming, but it won’t be long before “AR” finds broader use in everyday life. The integration of AR into healthcare, the workplace, and commerce is already under way.

A surgeon at a Chinese hospital is testing the use of AR in minimally invasive surgery, for example, overlaying data on images of (non-human) organs. More prosaically, San Diego-based Jerome’s Furniture is using an AR app to help customers visualize what chairs and sofas would look like in their homes before they decide what to a purchase. Israeli company Cimagine, which developed the AR system for Jerome’s, is helping retailers build AR showrooms and vendors such as Coca-Cola sell more product with augmented sales tools. Russian company Mobile Angels developed an AR mobile app to help skiers safely navigate ski resorts.

If AR can hit the ski slopes, why not the supply chain?

“It’s not a question of will the technology come into our space, but of how and when,” said Lance Healy, co-founder and chief innovation officer at Banyan Technologies, a cloud-based transportation management company. The big question, Healy said, is “how does it add value? Remember when RFID (radio frequency identification) first came out? Everyone loved the idea, but no one wanted to pay for it.”

To truly add value, AR will have to eliminate wasted time for truck drivers and improve the flow of freight and data for shippers, carriers, and third-party logistics providers. It will also have to be easy, very easy, to use.

“I see the use of the technology being applicable anywhere trucking personnel are interacting with freight or equipment and they need to look up or stay abreast of information,” said Lloyd Palum, chief technology officer of Vnomics, which develops technology to help truck fleets train drivers and optimize fuel use. “For example, any of the workflow associated with freight could benefit from making the manifest ‘virtual’ through the use of AR. You could point your cell phone at a piece of freight and automatically see the manifest information pop up as an overlay. The delivery receipt and any signature could be captured within this AR display.”

AR, Palum said, is “really is just a convenient way to automatically associate information with specific physical entities without using adjunct paper forms.” And there’s plenty of paperwork in trucking, in particular. “All we are talking about is improving workflow using those technologies to eliminate and improve paper processes,” he said. “Mobile and cloud are the enablers.”

That hypothetical AR application in many ways resembles an updated and “game-ified” RFID or barcode reader. “Remember when we went to QR codes and how much more information you can get out of a QR code than a standard barcode? I could see this being the next evolution of that,” said Healy. “All that data will be contained on a label that may not be visible to the human eye, but would be visible to an app,” he said. “You could have more rich data, more rich content, to the point where if you needed to call somebody the phone number could be contained in the information. The more data you can pack into it, that’s really the critical piece, in terms of value.”

Instead of using a special scanner to read a tag or code, one would use the camera of a smartphone or tablet. The advantage: users could get more information, and apps could be linked in ways that weren’t possible with RFID and barcode scanners.

“Drivers could hover their phones over the bill of lading and the app tells them the best way to get to the destination, any restrictions or requirements,” said Mark Murrell, vice president of sales and marketing at CarriersEdge, which provides online truck driver training tools. “All of those things can be put together in a single app that gives the driver a route, plans the day, considers the hours of service, and gives the driver real time updates all day,” he said.

The use of AR in trucking or warehousing isn’t that futuristic, it’s more a matter of applying a new technology to existing problems using hardware, software and data available today.

Take the loading dock scenario involving fictitious truck driver Jane Doe, as an example. “Fleets are doing this now,” Murrell said. “One company we work with has something almost exactly like that. When a truck comes to its facility, their system picks up the truck number and alerts people in the office. The concierge comes out and takes care of the truck and driver. They know everything about that truck and what it needs already. It’s a lot nicer for the driver.”

That system may not involve augmented reality, but for the driver, it is a better reality. More prosaically, perhaps, AR could be used in driver training.

“My first thought is the world of driving simulators is going to change tremendously,” said Murrell. “There’s a whole pile of clunky hardware now to allow people to pretend their driving. A lot of that could be replaced by a head set, so all of a sudden you don’t need this giant hunk of hardware.”

Healy sees AR potentially reducing the need for large dimensioning equipment used to get the cubic dimensions of palletized less-than-truckload shipments. “The immediate thing I could see is a dimensionalizer app on your phone that shows you information on the pallet,” he said. It’s not a big leap from there to imagining AR-based warehousing apps and intermodal yard management apps. Or AR-based apps that could help drayage drivers locate containers stacked up at seaports. The use of AR in such apps could proliferate as the Internet of Things expands to include more trailers, containers, and even palletized shipments.

There’s also potential application for AR in vehicle maintenance and inspection. During pre-trip inspections, “The driver could walk around the vehicle and see the repair history show up as annotation on different parts of the truck,” Palum said. “With AR technology it’s possible to walk around a vehicle and point it at headlights or tires and through image recognition, which is also getting really good, you wouldn’t have to have the physical markers or tags. By using the recent enhancements in AR you don’t necessarily need to have those tags or sensors.”

“You’ve got more drivers coming into the industry who aren’t life-long truck guys,” Murrell said. “Having some sort of AR that can give them information about different points about their truck makes sense. The hardware is in the phone already, it’s just building the software.”

If any AR-based trucking or supply-chain app is going to be successful, however, it has to be demonstrably better than the technology or process it replaces. In many cases, that’s paper. And many truck drivers, especially veteran truckers, like paper, as in paper logbooks.

“Responsiveness is going to be key,” Palum said. “If I’m trying to get a truck ready to do the day’s deliveries, I’m not going to be tolerant about delays. When you go to replace paper, a lot of people conclude that when it comes to responsiveness and ease of use, paper is great. What bothers them is that it leaves all that data in the physical world and not in the cloud.”

Although Pokémon Go was a phenomenon when released in July, use of the game has dropped dramatically in the past two months. Based on e-receipts, Slice Intelligence determined Pokémon Go lost 79 percent of its U.S. paying players — not total players, as the app is free to download, but those who buy products within the game — by Sept. 9.

That may have more to do with the game itself than AR technology, but developers looking to bring AR to the supply chain need to think carefully about design.

"You don't want to distract the driver," Palum said. "You have to wrestle with giving the driver the right information at the right time, but to do it in a way that's not distracting. And you need to make sure these AR apps meet the need for an easy solution. People become enamored of technology, but there are other things to be considered. Are you truly going to make it faster and easier? Those aren’t technical issues, they’re human and social issues that tend to get pushed to the background when we’re talking about technology. But they’ll certainly derail this kind of thing if you don’t keep your eyes on them."