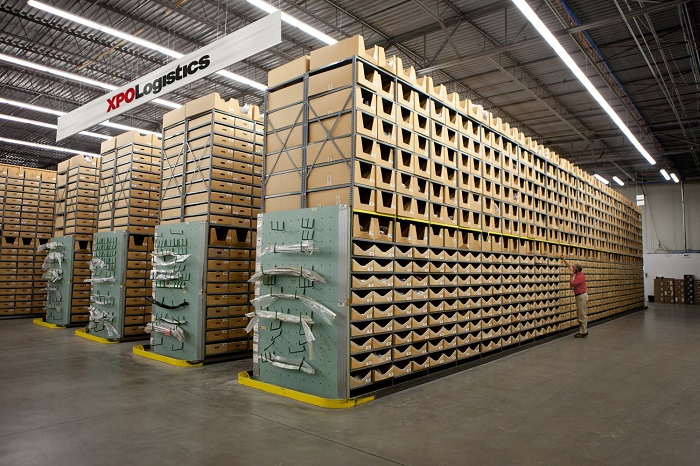 Technology investments in the warehouse, at LTL docks, and in the last-mile delivery business are in the works at XPO Logistics, which expects consumer and business demand to propel technology in 2018. Photo credit: XPO Logistics.

XPO Logistics will invest more than $450 million in technology this year, and make one or two “strategic” acquisitions as the company expands operations on a global scale.

“When we announced last year we were going to get back into mergers and acquisitions, we said we would do it in a deliberate manner,” Bradley S. Jacobs, chairman and CEO, said in an interview Wednesday. “By the end of 2018 we should be able to conclude one or two large acquisitions that are strategically compelling and financially attractive.

The company is well poised to acquire new companies, tap a $3.2 billion global sales pipeline, and invest in technology in 2018. XPO’s “asset-right” strategy helped the logistics operator deliver more freight in the fourth quarter and 2017, increasing revenue in non-asset and asset-based operations alike, pushing total revenue for the year to $15.4 billion.

Strong revenue gains and a second straight year of net profits should put to rest any remaining questions about XPO’s rapid growth by acquisition, its ability to integrate diverse operations, and whether the company should mix asset-based and non-asset operations. Those questions, raised by analysts and competitors in 2015, evaporated in 2017 as transport capacity tightened.

“We have massive access to capacity” through brokerage and freight forwarding as well as last-mile delivery, less-than-truckload (LTL), rail intermodal, and logistics operations, Bradley S. Jacobs, chairman and CEO, said in an interview Wednesday. “We have ample capacity, but the cost of that capacity has gone up, we’re sharing the cost in part with our customers.”

Managing that capacity to get optimal asset utilization across its businesses, including the assets utilized by its brokerage and forwarding units, requires more spending on technology. “We’ll be rolling out a whole host of new tools and apps throughout 2018,” Jacobs said, starting with a proprietary warehouse management software platform XPO will introduce in March.

The WMX platform will help XPO rapidly launch new projects for customers, Jacobs said. “It’s going to dramatically reduce our ramp-up time,” he said. The system “is optimized for mobile, for smartphones. It can be used on a laptop, tablet, or a smartphone and integrates with our other technology. It’s going to bring robots online in the fraction of the time it usually takes.”

Jacobs is known for thinking big when it comes to technology — XPO is using drones, for example, to help manage warehouse inventory and warehouse robots to move goods. Advanced robotics is the first of four technology spending priorities at XPO, he said. But XPO is also thinking "small," as small as the LTL pallet.

“We’re developing new state-of-the-art analytics to capture data by pallet,” he said. “We can analyze thousands of data points to arrive at optimal work loads for LTL dock workers and drivers. That eliminates waste, and these are self-learning programs, so they get better.”

XPO is using predictive analytics to forecast demand for its contract logistics business and better plan how to deploy and use resources. “Our algorithms use historical trends and match them with data from customers to predict how much labor we will need the next day,” Jacobs said. “Using predictive analytics to forecast logistics demand helps us speed up fulfillment and deliver a better customer experience. That’s true in reverse logistics as well.”

In the last-mile arena, XPO is offering customers the ability to track shipments online and have delivery appointments sent directly to their online calendars, raising the level of visibility and giving consumers more control over deliveries. “That’s the number one request we get from consumers,” Jacobs said. “We’ll add a voice notification feature in the next few months.”

If robotics is the first “basket” for technology spending at XPO, the second is big data. The company has more than 100 full-time data scientists, Jacob said. XPO is increasingly using machine learning, also known as artificial intelligence, to build better supply chain models. Visibility and customer service are the third basket, relying heavily on data management.

“Today, two-thirds of the goods we move are automatically tracked without human intervention,” Jacobs said. “Over time, that’s going to approach 100 percent. That’s the way the world is turning.” The fourth basket: becoming a digital marketplace. By that, Jacobs means “finding the best carrier for a load at any given time using algorithms that do the matching.

“These are the areas we believe will make the greatest impact on our customers, reducing inventory holding costs, reducing return cycles,” he said. “It’s our secret sauce.”

That sauce helped fuel a 10.4 percent increase in XPO’s organic revenue in the fourth quarter, led by gains in freight brokerage, last-mile logistics, and contract logistics. Freight brokerage, one of XPO’s earliest businesses, increased organic revenue 33 percent year over year to $767.3 million in the fourth quarter, as shippers turned to XPO for capacity.

“We had a robust peak season,” said Jacobs.“We saw strong e-commerce growth in the United Kingdom, the Netherlands, Italy, and Spain. E-commerce is our strongest type of customer. The portion of our business that is retail and e-tail grew to 29 percent” of the total, he said. “E-commerce really is rocket fuel for us” across last-mile and XPO’s other business lines.

Jacobs does not see his rocket running out of fuel anytime soon. With economic growth in all its markets and the transformation of the supply chain to the "omnichain," XPO is positioned to increase price, revenue, and provide needed capacity, whatever the mode, he said. He does see the impact of tight capacity in over-the-road trucking rippling through other transportation and logistics sectors, including intermodal rail, where XPO owns the former Pacer International.

“Shippers are looking at intermodal in a more favorable light,” Jacobs said. XPO’s intermodal revenue rose 7.3 percent in the fourth quarter, a big increase for that business line, he said. “Intermodal revenue has been flat for a while. It’s as strong now as we’ve seen in three or four years.” New intermodal contracts signed last year helped boost the business, he said.

The electronic logging device (ELD) mandate has had an impact, too. “Carriers are rejecting loads, and they’re spilling over into the spot market,” which now accounts for about 70 percent of XPO’s brokerage revenue, he said. We’re seeing ELDs have an impact on those lanes that are 500 to 600 miles long and where there’s enforcement. We’ve seen rates go up there.”

He expects to see the ELD effect redouble when inspectors begin issuing out-of-service orders to non-compliant drivers in April. “Capacity doesn’t look like it will lighten up in the near future.”