Impressive Q2 earnings from UPS come at a cost to shippers

Impressive Q2 earnings from UPS come at a cost to shippers 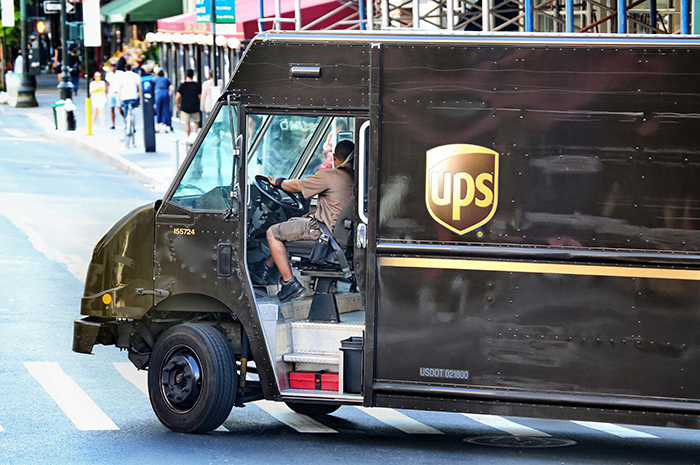 UPS carried a record 21.1 million packages per day in US domestic volumes during the second quarter, but operating profits in the segment slipped 2.2 percent to $1.2 billion as revenue per piece declined. Photo credit: MikeDotta/Shutterstock.com.

The parcel, trucking, and third-party logistics provider in May implemented a temporary peak surcharge on some ground residential and SurePost deliveries, as well as on large packages, to manage increasing demand.

“Moving forward we are focusing on efficiency and revenue quality to improve US operating margins longer term,” Brian Newman, chief financial officer, said in a statement.

UPS reported record US domestic volumes for the second quarter, but operating profits slipped. Average daily volume (ADV) increased 22.8 percent year over year to 21.1 million packages per day during the quarter. While revenue for the company’s US Domestic segment increased more than 17 percent to $13.1 billion year over year, adjusted operating profits fell 2.2 percent to $1.2 billion for the quarter, as revenue per piece declined across all service offerings due to e-commerce parcel characteristics as well as increased residential deliveries.

Residential deliveries remained high during the second quarter as e-commerce demand ballooned due to COVID-19 lockdowns and employees working from home. As a result, business-to-consumer (B2C) shipments increased 62.5 percent during the quarter. B2C shipments ultimately represented the majority (69 percent) of total volumes for the quarter, as retail stores only slowly began to reopen in the beginning of May.

UPS reported scattered delays across the US throughout the quarter as capacity tightened. To manage this increased demand, temporary ground surcharges were implemented in May on some volumes.

Looking ahead to the upcoming holiday peak season, which generally runs from November through December for parcel carriers, UPS is accelerating plans to improve time-in-transit and expand weekend delivery to 75 percent of the US population by end of the year.

International average daily volumes were up 9.8 percent, thanks primarily to a surge in outbound demand from Asia due to demand for personal protective equipment (PPE) and factories reopening following closures aimed at stemming the spread of COVID-19, as well as rising cross-border e-commerce in Europe, UPS said. Asia export volume increased 48.6 percent year over year during the second quarter.

Despite a worldwide air cargo capacity shortage due to the grounding of most passenger flights, UPS was able to shift air capacity where needed to keep its network fluid, providing 635 extra flights using its own fleet and through other airline partners and another 300 charter flights booked by its air freight forwarding team. Adjusted operating profit in the International segment increased 26.6 percent during the second quarter, offsetting declines in the US Domestic and Supply Chain & Freight segments. As in the US Domestic segment, UPS implemented surcharges on flights from Asia and Europe to the US in response to the increase in demand.

The Supply Chain and Freight segment benefited from strong air freight forwarding demand out of Asia, which led to an 8.5 percent increase in revenue for the group. However, UPS’ less-than-truckload and truckload brokerage units reported “muted” demand throughout the quarter.

In her first earnings call as UPS’ CEO, Carol Tome, said the company is “working to be better, not bigger” by focusing on increasing margins while maintaining the right balance of capacity based on demand.

Moving forward, the company is rationalizing its 400 to 500 service offerings to reduce its expenses. However, this could potentially mean higher prices for customers as service offerings are either combined or even dropped. UPS said it is also focusing on pricing to reflect what it considers the value it brings to customers, in addition to implementing temporary surcharges during periods of increased demand.

“Working to be better, not bigger” also will likely include being more selective in the types of shipments UPS pursues. The types of shipments will most assuredly include those in e-commerce. For example, its Digital Access Program, which includes partnerships with e-commerce platforms such as Stamps.com and Square, has attracted 120,000 new UPS accounts since being introduced in 2019, according to the company.

The outlook for the second half of the year is positive, but the company was not able to provide guidance because of the uncertain environment. UPS expects a strong peak season, but average daily volumes are projected to be lower than its record second quarter. Additional insight into peak season will likely come at a later date along with additional peak season surcharges to manage holiday demand and volumes.