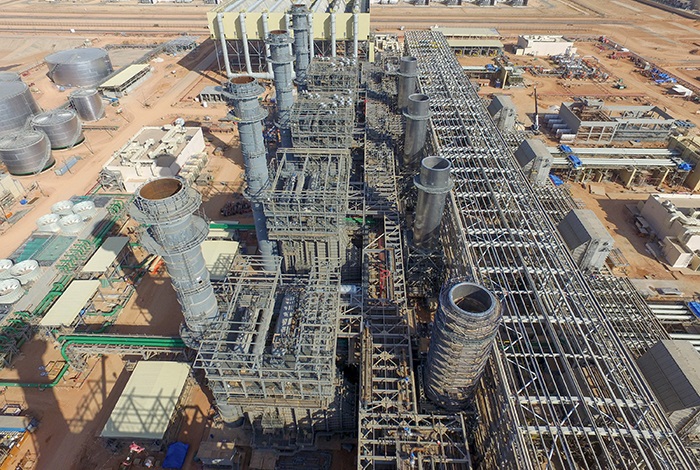 From 2010 to September 2018, 333 shale-fed petrochemical projects were announced in the United States, valued at $202 billion. Photo credit: Shutterstock.com.

Rising oil prices and a robust liquefied natural gas (LNG) and petrochemical construction market will continue to be good news for the project logistics transportation industry through 2019. The multipurpose/heavy-lift (MPV/HL) fleet, in no hurry to add new capacity, finally is seeing freight rates inch higher. But oil price volatility, the US-China trade dispute, and the looming disruption of the International Maritime Organization’s (IMO's) 2020 low-sulfur fuel mandate could slam on the brakes.

First, the good news: the energy and chemicals sector is in growth mode — including for refining, petrochemicals, gas, and LNG — and should last into the early 2020s. David Seaton, CEO of global engineering, procurement, and construction (EPC) company Fluor, made remarks to this effect during a 2018 earnings call, and Bechtel, Linde, Sinopec, TechnipFMC, Daewoo, and similar global EPCs are also optimistic.

Reinforcing that sentiment, the American Chemistry Council reports that between 2010 and September 2018, 333 shale-fed petrochemical projects were announced in the United States, valued at $202 billion. Of these, 22 percent are under construction, 41 percent planned, 6 percent delayed or unknown, and the remainder completed.

Since September, another US Gulf Coast petrochemical project worth $1.7 billion has been added to the roster, according to Chemical Week, a sister publication of JOC.com. On the oil and gas side, analysts expect the top seven international oil companies to spend $136 billion in capital projects by 2020, according to The Wall Street Journal.

Underpinning this healthy market is faith in an oil price strong enough to justify capital investment. IHS Markit expects oil prices to increase through 2019 and then decline to roughly $70 per barrel (in 2017 dollars) through the early 2020s. However, the price of dated Brent, a North Sea crude oil blend used as a global benchmark, surprised markets by bouncing between $85 and $61 per barrel through October and November, likely because of exemptions to Iran export sanctions, oversupply within OPEC, and slowing demand. Brent traded at about $63 per barrel Monday.

No one likes to be reminded of late 2015 and early 2016, when oil prices plunged as low as $28 per barrel, freezing the EPC sector in its tracks and dealing a crippling blow to project cargo transportation, at that point just recovering from the global recession. IHS Markit doesn’t expect oil prices to bottom out in the same way now: $70 per barrel is considered sustainable, allowing EPCs to continue to invest in capital projects that drive transportation.

The 2015 to 2016 price plunge forced oil majors and project developers to manage project costs, including transportation, and they’re not letting these lessons fade, regardless of price recovery. Owners have become “much savvier,” according to a report from industry consultant PwC. More shippers now prefer to manage their own vessel chartering or work with project forwarders directly, rather than through EPCs, for example.

As transportation is unbundled, however, project owners also bear more logistics risk. For all shippers, educating non-logistics colleagues about moving project cargo can be a challenge. They often “don’t understand the difference between ordering from Amazon and shipping a reactor from China,” one seasoned project shipper said.

The Section 232 (steel) and 301 (China) tariffs also are complicating the importation of breakbulk and project cargo. Every transaction “requires so much more diligence,” an EPC’s compliance expert said. “It’s become very difficult to conduct business.” Although tariffs and quotas have always been part of global business, the new regime is unusually challenging.

EPCs have made substantial investments in Chinese fabrication yards — with the goal of containing costs and increasing efficiency — import modules, pieces, and materials to build mega-projects such as the petrochemical plants and LNG facilities going up in the US.

Many US-based industrial manufacturers also rely on Chinese components. These project shippers are facing difficult choices. The advantages China provides will keep some manufacturing and sourcing there despite rising costs, but a few shippers told JOC.com that they are considering moving their manufacturing facilities and/or sourcing to Southeast Asia or Mexico. Once supply chains are remade, they are unlikely to revert, even if the current tariffs are modified.

China is also the primary target customer for the resins and LNG to be produced by the massive projects under way on the US Gulf Coast. The American Chemistry Council warns that China’s retaliatory tariffs may put these projects at risk, depending on China’s ability to find substitute suppliers.

IHS Markit analysts expect US steel prices to remain soft, although higher than they were before the new tariffs were imposed last summer, well into 2019. Imports are still cheaper than domestically produced steel. According to The Wall Street Journal, US steel imports are down 13 percent, while imports into Europe were up 10 percent, hammering domestic production there. Turkish steel, cheap due to the foundering lira, is undercutting European competition.

As the market brightens, consolidation is likely to continue at the premium end of the MPV/HL fleet, the ships likely to be in demand for the most complex mega-projects.

The sector makes up a small slice of the commercial fleet, about 3,200 ships. Of that, about 900 have lift capacities of 100 tons or more, according to Susan Oatway, senior analyst with London-based shipping consultant Drewry Maritime Research. Approximately 340 are considered premium, with lift capacities exceeding 250 tons, while 25 can lift more than 1,000 tons.

Only two new vessels appear to have been ordered during 2018, according to Drewry, a sign of chronic overcapacity, long-term weakness in the market, and ongoing competition for breakbulk and project cargo from the roll-on, roll-off and container sectors. This competition could strengthen if liner services prove more adept at handling bunker cost increases due to IMO 2020, the new regulation that kicks in on Jan. 1, 2020, requiring all vessels to switch from high- to low-sulfur fuel oil.

The deadweight tonnage of the MPV/HL fleet has remained fairly stable over the past few years, with older, smaller vessels being demolished and replaced by fewer new vessels of higher tonnage and lift capacity. Drewry expects this pattern to continue in the near term, especially as IMO 2020 approaches. Owners of smaller, older, less-efficient vessels won’t have many options after the new regulations are in place.

The MPV/HL fleet provides tramp services globally, and the new low-sulfur fuel regulations will present unique challenges for the sector. Netherlands-based carrier partners Spliethoff and Big Lift are installing scrubbers, a choice that makes sense for owner-operators but not for vessel owners that charter out their ships, according to Nicolas Breiding, head of research at Hamburg-based brokerage Toepfer Transport.

For them, “it’s hard to make a case for installing a $2 million-plus scrubber, because it’s the operator who saves money on bunkers, not the vessel owner who is paying for the scrubber,” he said.

Some operators could choose to rely on marine gasoil (MGO), at least temporarily. Although potentially costlier than low-sulfur fuel, this choice would greatly reduce the risk of bad bunkers, already a multimillion-dollar problem for many, including Leer, Germany-based MPV/HL carrier BBC Chartering. MGO is readily available, it burns efficiently, and carriers already are required to use it in emission control areas (ECAs). The risk reduction could justify the higher cost.