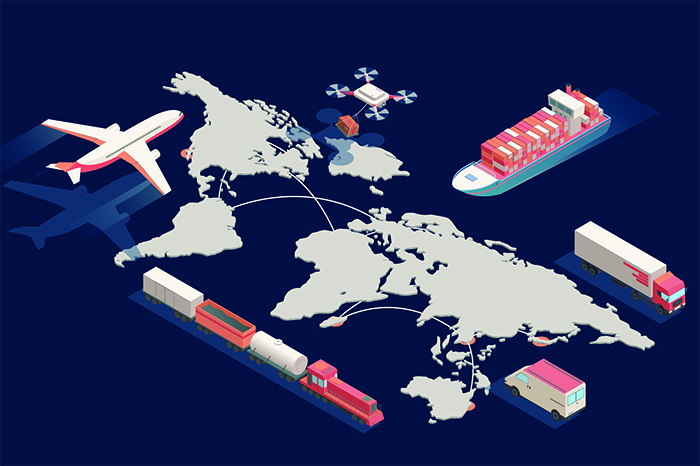 Combined revenue growth for the Top 50 Global Logistics Providers slowed from 14 percent in 2018 to just 2.1 percent in 2019. Photo credit: Shutterstock.com.

Reflecting the gradual slowdown in the global economy, revenue growth among the world’s 50 largest global logistics providers decelerated considerably during 2019 compared with the previous year. That bodes poorly as trade demand falls as the impact of the coronavirus disease 2019 (COVID-19) widens, though, some 3PLs might be able to capitalize on the disruption and handle a larger share of their customers' volume.

Total third-party logistics (3PL) revenues ticked up 2.1 percent to $346 billion for the year, according to the latest annual study prepared for JOC.com by Pittsburgh-based SJ Consulting Group, a sharp contrast from the 14 percent growth rate seen in 2018. Excluding revenue from the third-party logistics activities of e-commerce behemoth Amazon, which topped the rankings for a second straight year, the combined revenue of the top 50 actually declined 1.2 percent to $293 million.

“Economic conditions started to wane in 2019,” which resulted in a slowing of US trade volume growth, said Mark D’Amico, senior analyst at SJ Consulting. Growth in US imports and exports in 2019 slowed to 0.2 percent from 5 percent and 4.3 percent, respectively, in 2018, D’Amico said.

Trade volume growth also was impacted by the Trump administration’s intensifying trade conflicts with China, Europe, and other major US trading partners. Uncertainty surrounding the often-unpredictable escalation in import tariffs in the US and reciprocal duties imposed by trading partners — as well as the threat of further increases — had a chilling effect on overall trade volume growth, said D’Amico.

As this year’s Top 50 list indicates, revenue growth among the largest global 3PLs was driven largely by a small handful of companies.

Those firms were led by Amazon, whose 25.8 percent revenue growth reflected a continued expansion in demand for e-commerce shipments worldwide. But even Amazon’s growth rate was lower in 2019 than during the previous year, when its logistics revenue expanded 34 percent.

In addition to continued e‑commerce volume growth, mergers and acquisitions also were a major driver in revenue expansion among firms that reported strong growth. DSV Panalpina, for example, reported 13.5 percent revenue growth, but that figure reflects the additional revenue resulting from DSV’s acquisition of Panalpina in August 2019, the largest merger in the sector last year.

NFI Industries, meanwhile, which saw its revenue rise 3.7 percent, was one of the few 3PLs to expand revenue organically, rather than through mergers or acquisitions.

Several of the largest US truck brokers — including Total Quality Logistics (TQL), Echo Global Logistics, and C.H. Robinson — on the other hand, saw their logistics revenues decline because much of their business took place in the spot market, where truckload rates fell following a sizable spike in pricing during 2018.

Although XPO Logistics’ acquisition of the UK-based contract logistics operations of Kuehne + Nagel did not take place until March 2020, it did represent a reversal of strategy from just a few months prior, said D’Amico. XPO CEO Bradley Jacobs told JOC.com in January the company was considering selling or spinning off as many as four of its transportation and logistics businesses to focus on its North American LTL operations. But in a March 8-K filing with the US Securities and Exchange Commission, XPO said it had “terminated the strategic review” that might have led to those divestitures “in light of current market conditions,” apparently referring to the impact of the coronavirus disease 2019 (COVID-19) pandemic on the global economy.

The logistics providers that recorded the largest declines in revenue for the year included South Africa-based Imperial Logistics, down 13.8 percent; China’s Sinotrans, down 12 percent; Hitachi Transport System of Japan, down 10.5 percent; Echo, down 10.4 percent; and Knight-Swift Transportation, the largest truckload operator in the US, which saw revenues slide 9.7 percent year over year in 2019.

According to D’Amico, a portion of the declines for some providers were driven by certain currencies weakening against the US dollar over the course of the year, including the euro, which fell 5.1 percent relative to the dollar in 2019; the Danish kroner, down 5.3 percent; South Korean won, down 5.6 percent; and South African rand, down 8.3 percent.

Looking to the remainder of 2020, D’Amico said he expects revenue growth among the 50 largest 3PLs to turn negative due to a drop-off in global economic growth, including a projected decline in US gross domestic product (GDP) that could be as high as 20 percent during the second quarter. He noted some companies saw revenues rise in the first quarter of 2020 because of strong demand for medical supplies and other essential consumer goods amid the coronavirus outbreak.

Global 3PL revenues “are going to see a short-term bump, but at some point, as inventories balance out, there will have to be a bit of a decline,” said D’Amico.

Evan Armstrong, president of 3PL market research and consulting firm Armstrong & Associates, said the market for third-party logistics services will likely decline about 10 percent during the second quarter of 2020, compared with the first quarter. He expects “probably a 4 percent bounce-back” in the third quarter, and a subsequent 4 to 8 percent rebound during the fourth quarter.

Overall, Armstrong predicts 2020 will be a “down year” for global logistics providers because of the impact of COVID‑19, including on fast-expanding Amazon. According to US News & World Report, workers in at least 19 Amazon warehouses had tested positive for the coronavirus as of the end of March, and Amazon temporarily closed its warehouse in Shepherdsville, Kentucky, in late March.

Armstrong projected a “pretty hard” ripple effect will follow through the US manufacturing and supply chain. Until now, he said, “Everybody’s gotten their second-day Prime packages, and logistics hasn’t been extremely impacted.”

If anything, the crisis has been something of a boon for logistics firms, as people stay home and buy extra supplies of groceries and other essentials. Food and groceries represent about 10.8 percent of domestic transportation management revenue.

“But as we get into April, more people are suffering, and there are truck drivers that are calling in sick,” said Armstrong. Warehouses, fulfillment centers, and manufacturing centers are going to be functioning under capacity, even if demand remains strong, he added.

How long will it take for the US logistics market to get back to normal? Armstrong believes the second quarter of 2020 is going to be “pretty tough sledding,” followed by an uptick in demand in the third quarter. Adding to the challenges presented by a potential downturn in demand, US importers will still have to deal with the tariffs imposed by the Trump administration, which “make sure we still penalize companies for importing goods,” he said.