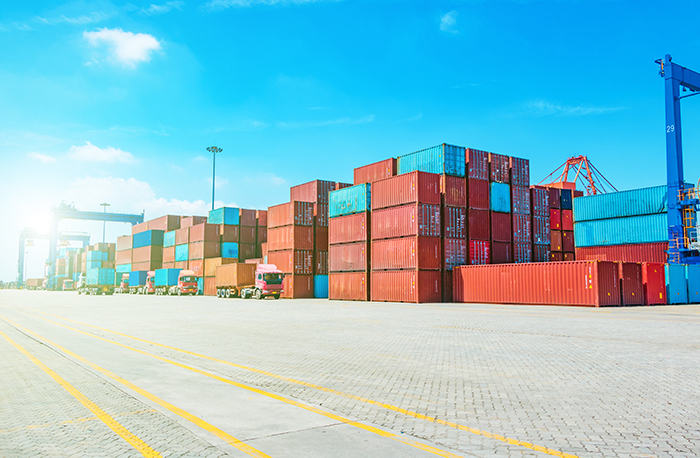 According to a Flexport analysis of publicly available trade data, inbound US containers in 2018 were only 65 percent full on average. Photo credit: Shutterstock.com.

Freight forwarder Flexport has begun offering its customers a new product designed primarily to trim ocean freight costs for full containerload (FCL) shippers that don’t use all or most of the space inside a container.

Under the terms of the product, called OceanMatch, San Francisco-based Flexport will match less-than-containerload (LCL) shippers whose cargo is complementary with FCL shippers willing to sacrifice one to two days of transit time for lower freight costs. The complementary characteristics for which Flexport optimizes include commodity type, cargo ready date, and origin and destination.

The product is targeted primarily at Flexport’s FCL customers that aren’t using the entire container, Ram Siddarth, the forwarder’s vice president of ocean consolidations, told JOC.com. “They are only paying for the amount of space they’re using in a container as opposed to the entire container,” he said. Using publicly available trade data, including from PIERS, a sister product of JOC.com within IHS Markit, Flexport determined that inbound US containers in 2018 were, on average, only 65 percent full.

For FCL shippers, the primary benefit of the product is lower cost, which Flexport says can be as much as 35 percent less using OceanMatch, depending on how much space is used and available matches. For LCL shippers, the advantage is a reduction in the number of shipments co-loaded with their cargo and shorter transit times. Whereas traditional LCL boxes often contain cargo from as many as 10 shippers, Flexport is capping OceanMatch boxes at three shippers. A pilot of the program of 200 shipments in the last quarter of 2018 found transit times for traditional LCL shippers were five days shorter on average, the company said.

“One of the major issues we face is ocean transit times,” said Lauren Nayerahmadi, international logistics analyst at Corkcicle, a maker of insulated drinking glasses and tumblers and one of 50 OceanMatch pilot customers. “Using OceanMatch has allowed us to cut costs on our smaller shipments and has saved us about 10 percent on shipments. We prefer OceanMatch to traditional LCL shipments for its transit time advantage. That is always an issue, and OceanMatch offers transit times competitive with FCL.”

Siddarth, who built Flexport’s LCL product before moving to lead consolidation services, said the company would present the opportunity to use OceanMatch at the time of booking, which could be anywhere from five days to two to four weeks before sailing.

The OceanMatch product is an example of Flexport attempting to leverage data to create new products for shippers. The company has in the past intimated it wanted to explore more LCL opportunities. Sanne Manders, Flexport’s chief operating officer, suggested in an August 2018 podcast that Flexport’s use of LCL is part of a strategy that’s enabled by its technology.

“Why do people use so much full containerloads?” he said on the Leaders in Supply Chain and Logistics podcast with Radu Palamariu, managing director of Morgan Philips Executive Search. “Because they don’t trust [LCL]. Well, [LCL] is actually a better product because you can reduce working capital. You get much more equal flow in your supply chain. If you have better processes, much better visibility, if customs holds are under control, LCL all of a sudden becomes a much better option.”

Siddarth noted the same dynamics. “The cost of the goods is controlled by finance while the cost of freight is held by logistics,” he told JOC.com. “The cost of capital is never taken into account. Having that data in a structured format helps us see things that might be missed. We’ve piloted this for nearly a year and it had to be clients that were open to shipping differently.”

Flexport secured a $1 billion funding round led by the SoftBank Vision Fund in February, bringing the total amount invested in the forwarder to more than $1.3 billion.

The OceanMatch product is available on shipments originating in Asia to US, European, and Canadian destinations.