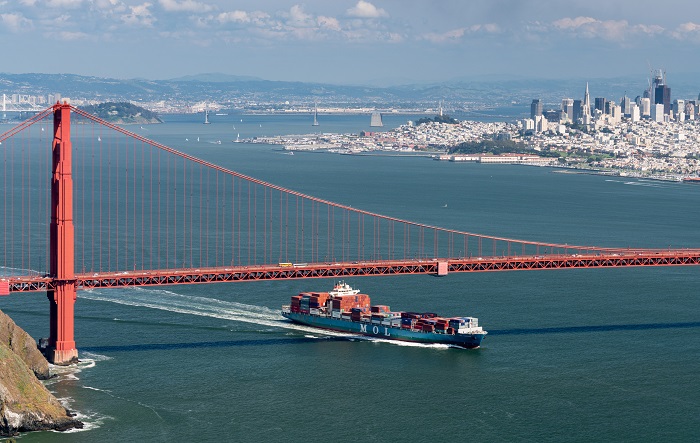 Flexport is closing in on a $1 billion valuation and reports it almost tripled its ocean volume last year as it taps technology to transform what it has labeled antiquated tech processes and take on the industry giants. But the fast-expanding San Francisco-based start-up faces strong investor expectations on returns in a historically low-margin, fragmented business in which their volume is a fraction of those they are targeting.

The digital forwarder that launched four years ago handled 80,000 TEU in 2017, a step up from 30,000 TEU the year before, according to chief operating officer Sanne Manders. By contrast, market leader Kuehne + Nagel handled more than 4 million TEU across its worldwide network in 2016. Transport Intelligence, a research and analysis firm, estimates Kuehne + Nagel controls about 10 percent of the global forwarding market.

When looking at forwarding from a trade lane perspective, the highly fragmented nature of the business is clear. On the Asia-US trade, where JOC.com has complete visibility through PIERS, a sister product within IHS Markit, the three top forwarders each barely have a 2 percent share of the market.

Since launching, Flexport has attracted significantly higher levels levels of investment than most other tech-enabled companies all trying to carve their place in the crowded logistics technology space. Most notable was Flexport’s $110 million Series C funding round late last year. The forwarder and customs broker recently opened its eighth global office in Hamburg, Germany.

In a JOC.comcommentary, Dan Gardner, president of Trade Facilitators Inc., said one of the biggest challenges for digital freight forwarding was the forwarding industry in general – a highly competitive and very low-margin business.

“For example, with more than 5,000 NVOCCs in the United States, forwarders are lucky to earn $50 or $100 per container in the trans-Pacific eastbound trade. With those kinds of gross profits, and technological bells and whistles notwithstanding, forwarding is a high-volume, low-margin affair on its best day,” Gardner wrote.

From a monetary perspective, he said the high-profile digital forwarders were well-funded by non-traditional investors. “With support from venture capital and private equity firms known more for hanging out in Silicon Valley than at port terminals, today’s digital forwarders have serious money behind them from organizations that are willing to place big bets.”

However, SeaIntelligence Consulting CEO Lars Jensen pondered in a recent blog post whether shipping technology was heading into bubble territory with valuations becoming “rather optimistic.” He gave Flexport as an example and said the digital forwarder appears to have a valuation 19 times higher than that of a traditional freight forwarder.

“Fundamentally speaking, this boils down to whether you believe an innovative way of moving freight can make you so much more profitable than the traditional way of being a freight forwarder,” Jensen wrote. “What if the increased efficiency instead manifests itself as lower costs for the cargo owners, just as we always see when liner shipping companies obtain better efficiencies only to have it eroded by lower freight rates?”

Either way, Flexport now dominates a widening group of technology-driven service providers changing the container transport business, as they crunch numbers and analyze enormous amounts of data. Its solutions range from big data analytics to trade management to rate marketplaces and automated documentation.

In 2017, the JOC compiled a Container Shipping Technology Matrix in an attempt to get a handle on the service providers transforming the industry through the use of technology. Flexport is one of the 94 companies listed in the matrix but many more have since made themselves known to the JOC since the list was published.

In analyzing the matrix, SeaIntelligence CEO Alan Murphy found that almost half of the companies were founded in 2012 or later, with the start-ups reaching a peak in 2014 before starting to decline.

Murphy said this could mean two things. “Either the number of new companies being launched in this industry is indeed declining, which seems to run contrary to the sense one gets from the activity in the market in 2017,” he said.

“Or, more likely, it is a reflection that no matter how good an idea a company launches, it simply takes time to get on the radar screen and penetrate the industry. If this second interpretation is correct, it implies that there could be an incubation time of some 3–4 years from start-up until these disrupters actually hit the main industry.”

Of the 94 companies on the matrix, SeaIntelligence said 34 are listed on Crunchbase, a database of technology investments. They received a total funding over the 2014–18 period of $866 million, but with a peak in 2016 followed by a slightly lower level in 2017.

“The data also appears to support the notion that the time to financially break into the industry is 3–5 years, consistent with our analysis of the age of the full set of 94 companies,” Murphy noted.

The value of the company is

Permalink Submitted by ferrullig@minds... on Jan 31, 2018 1:33PM EST
The value of the company is 19 times the "norm" - why? Can't be based on profitability. 80,000 teus might generate $800, Million in gross margin. I assume there are costs to the offices and people, and the technology involved. So a $1.Billion "value" come from where?