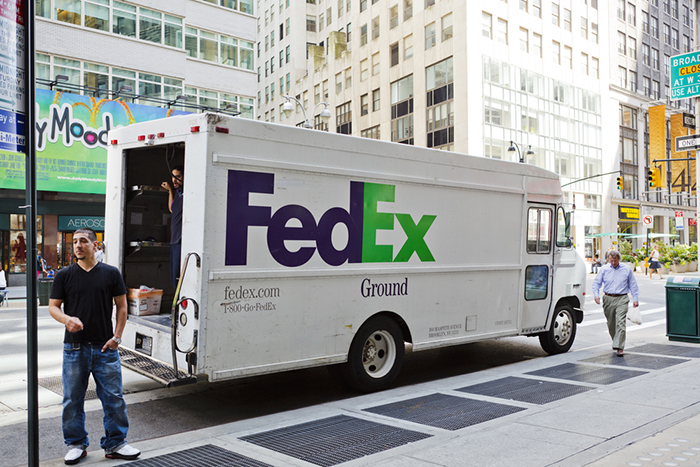 Riding a wave of e-commerce shipments, FedEx is expanding the delivery of FedEx Express packages by FedEx Ground, its US domestic over-the-road package business. The company is optimizing its air- and ground-based operations as Amazon rapidly grows its own parcel delivery network and online sales of consumer goods soar during the global coronavirus disease 2019 (COVID-19) pandemic.

FedEx Ground began delivering day-definite Express residential packages this month in Greensboro, North Carolina. In April, the service will be expanded to Cincinnati; Minneapolis and St. Paul; Newark, New Jersey; Phoenix; and Salt Lake City. “We will continue to roll this out over the next 12 months,” Raj Subramaniam, president and COO, told analysts Tuesday.

The intra-company subcontracting is one part of FedEx’s plan to become what founder, chairman, and CEO Frederick W. Smith called “the most successful North American package delivery company.” The international trade FedEx has long thrived on is declining, thanks to trade wars, mercantilism, and protectionism, Smith said, but e-commerce is booming.

“We’re already in the midst of an e-commerce revolution and I don’t think that’s going to stop,” Smith said during an earnings call with Wall Street analysts. As major retail chains are temporarily closing stores across the United States and Europe to fight COVID-19, they’re sharpening their focus on e-commerce, he said.

The plan to rely on FedEx Ground for delivery of some Express packages was announced last December, as FedEx strove to counter the loss of business from Amazon and heightened competition with new services and ground capacity. FedEx Ground extended its delivery schedule to weekends, moving to a permanent seven-day delivery schedule Jan. 1.

Building package density is critical to controlling operating costs, which are rising as FedEx Ground expands US package service. “As we continue to grow Ground and its densities, we are lowering costs at a rapid clip,” Alan Graf, CFO and executive vice president, said during the call. “This is a day-to-day and week-to-week look right now. We’re managing as we go.”

In the quarter ended Feb. 29, FedEx Ground revenue leaped 11.1 percent year over year to $5.8 billion, a 10 percent increase from the quarter ended Nov. 30. Sequentially, operating costs rose $517 million to $5.5 billion, and were up 17.4 percent year over year. That cut Ground’s operating profit to $355 million from $586 million in the year-ago quarter.

Costs at Ground increased in every category except fuel in the last quarter, with salaries and benefit costs rising 20 percent, and purchased transportation costs up 18 percent year over year. Total daily package volume at Ground rose 10.3 percent as the FedEx company handled 663 million packages in the quarter, which includes the December holiday peak. Revenue per package dropped 1 percent to $8.78, according to statistical data published by FedEx.

Time ‘is of the essence’

“In the last couple of weeks, we have seen increased demand from Asia, strong demand for FedEx Ground [in the US], and even commercial volumes have been quite stable,” said Subramaniam. “The first two weeks of March have been good. What we don’t know now is how this pandemic evolves and how that affects demand. There are so many unknowns.”

What’s not unknown is Amazon’s reaction to the sudden boost in e-commerce sparked by consumers working and living in varying degrees of isolation to stop the spread of the virus. The online retail platform said it would add 100,000 workers to handle the surge in online shopping in the US as it prioritizes the shipment of essential goods from its warehouses.

For FedEx, “time is of the essence right now,” said Satish Jindel, president of transportation researcher SJ Consulting Group, who has argued for the merger of the Express and Ground US delivery networks. “Amazon is months, maybe weeks away from offering a full-scale door-to-door parcel service. They [FedEx] really need to move at a more rapid pace.”

By expanding the limited subcontracting agreement, “they’re starting in the right place, on the delivery side,” Jindel said. The longer it takes, he warns, the harder it will be to gain business.