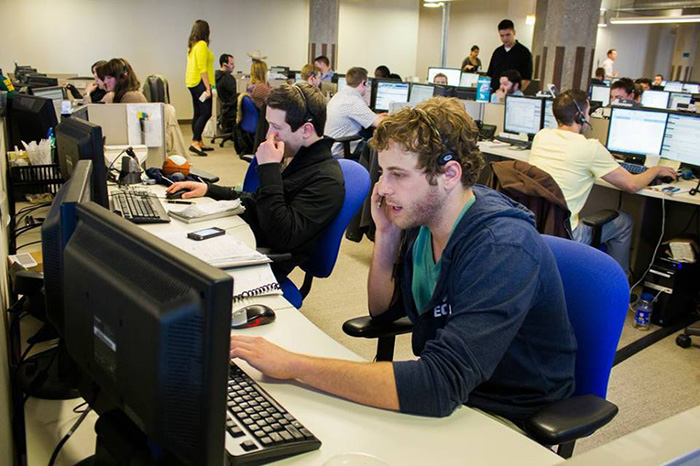 Echo Global Logistics, one the offices of which are pictured here, is working on an integrated technology platform covering all modes from parcel to LTL and truckload and intermodal.

Attempts by high-tech start-up companies to “Uberize” and disrupt freight brokerage aren’t a threat to traditional brokers, but an opportunity, Douglas R. Waggoner believes. “There’s lots of speculation about whether these ‘Uber’ apps are going to put brokers out of business. My position on that is no,” the chairman and CEO of Echo Global Logistics told JOC.com.

“I don’t think there’s room for disruption, I think there’s room for evolution,” Waggoner said during an interview at Echo’s Chicago headquarters. That evolution includes opportunities for collaboration. “I think that we and some of our large competitors are in a great position to deploy technology, in some cases working in conjunction with some of these startups,” Waggoner said.

Technology, especially technology that can be scaled to industrial enterprises, increasingly is what shippers want from third-party logistics companies and brokers, and those that can deliver promised efficiencies will have a strong marketplace advantage, Waggoner said. That’s one reason Echo acquired truckload broker Command Transportation in April 2015 for $420 million.

“The Command deal was a transitional type of acquisition that really gave us scale and density as a truckload broker and some great technology and people,” Waggoner said. “They had perfected technology around the truckload brokerage process. So we basically took the functions that they had built into their system and integrated them with our system.”

The result is an integrated technology platform covering all modes from parcel to LTL and truckload and intermodal that Echo plans to roll out by the fall. At the same time, the company is more than doubling the size of its Chicago headquarters to 225,000 square feet to make room for about 500 former Command employees. Command was headquartered in Skokie, Illinois.

Founded in 2005, Echo is part of a cadre of large, fast-growing logistics and brokerage companies that has emerged in recent years. The 3PL’s revenue soared more than 1,700 percent through 2011, hitting $603 million. Echo even expanded revenue 28 percent in the recession year of 2009. Echo’s gross revenue hit $1.51 billion last year.

Volume growth means Echo is increasing market share, Waggoner said. “We’re able to show growth because we can take market share and we’ve been active with mergers and acquisitions,” he said. “Those two factors together allow us to grow faster than most.”

The company has told Wall Street it expects its gross revenue to reach $3 billion by the end of 2018. “When you ask what’s the bridge from here to there, it’s partially continued organic growth, some of the revenue synergies from the Command deal and our acquisition strategy,” Waggoner said. After absorbing Command in the past year, Echo is back in the market.

“Acquisitions have always been part of our growth strategy,” he said. Most of those acquisitions “have been small tuck-ins that helped us paint the strategic picture. Going forward, we will probably be more selective about doing things that don’t conflict with what we do today.” That could mean looking at acquisitions in the intermodal market, specialized truckload or flatbed businesses or companies doing cross-border business with Mexico and Canada.

“We’re a non-asset, multimodal transportation company. We do small parcel work, we have an LTL solution, we have managed transportation and a self-managed customer portal. We have truckload and we have partial truckload; we’ve got intermodal and we do some international. We have a technology platform we’ve built that can handle all of those modes, all the pricing, all those operational movements of freight. It’s a very sophisticated end-to-end solution.”

Like its peers, Echo has invested heavily in what Waggoner called proprietary “industrial-strength” technology that can be scaled to meet the needs of an enterprise customer. “It’s also about perfecting a workflow and a process — that’s your secret sauce — and then building processes based on that secret sauce,” Waggoner said. “You could buy some software and start a brokerage tomorrow, but you wouldn’t have a fraction of the bells and whistles that any of the big brokers have in their systems,” he said. “It’s a whole other level of sophistication.”

It’s also a large investment. “Even at our age, only 11 years old, we’ve written 17 million lines of code,” Waggoner said. “That’s a lot of overhead.” The advantage for a digital start-up, he said, is there are no prior investments and decisions holding them back. “If you’re unencumbered by legacy systems, and you’re working in a greenfield environment, you can develop stuff pretty quickly,” Waggoner said. “The opportunity then is for the more mature companies to partner with some of the startups to rapidly deploy technology to make our marketplace more efficient.”

Just don’t get infatuated with the latest and greatest shiny new technology trend, he warned. “I think there’s a vision that technology itself can do the job without the people, and that’s not realistic, especially in a business that has so many points of failure,” Waggoner said.