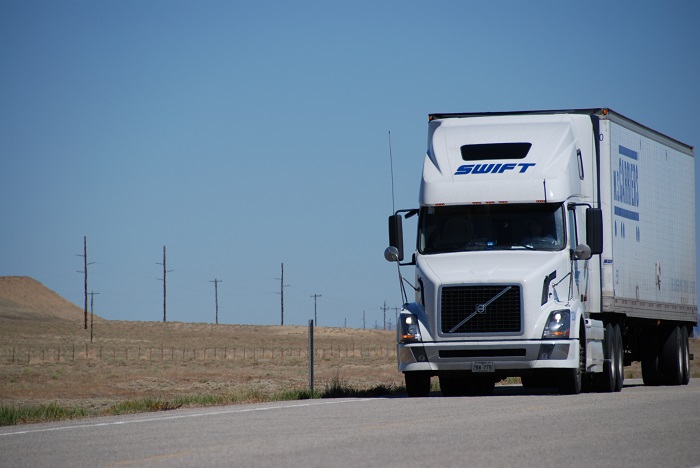 Tighter 3PL profit margins in the second half of 2017 reflected the inability of many 3PLs to quickly recoup rising transportation costs from shippers. Photo credit: Shutterstock.

US third-party logistics providers (3PLs) are getting more business, but less profit in some cases, as a rapid increase in demand that tightened truck capacity and drove up rates in late 2017 squeezes their margins. One exception is less-than-truckload (LTL) brokerage, where 3PL profit margins expanded in the early fourth quarter, despite LTL carrier rate hikes.

When the US economy and freight markets turned in 2017, they turned quickly. The blow from two major hurricanes in August and September tightened capacity in freight markets and propelled costs higher on top of accelerating economic growth in the third quarter, the second of two straight quarters of US GDP expansion of 3 percent or higher.

That pointed to a need for more strategic partnerships between shippers and logistics providers, not to just to react to market swings more quickly but to proactively prepare for them.

"Things happened extremely fast," said Mark Christos, vice president of the transportation group at Matson Logistics, a board member of the Transportation Intermediaries Association (TIA) and also its market report chairman. "In a lot of cases, people had to react week by week." Preliminary TIA data for the fourth quarter reflect "dramatic change" still affecting 3PLs, he said.

In the second half of 2017, many logistics firms struggled to keep up with rising carrier prices and had difficulty passing those increases along to shippers, especially those they serve under annual contracts. As those agreements come up for renewal in 2018, shippers can expect their 3PLs, like their carriers, to push for increases that account for higher rates and transport costs.

"If anyone’s meeting their transportation budget, I don’t believe it," Rachal Snider, vice president of customer supply chain at Chicago-based AFN Logistics, said in November. "Nobody could have predicted this market," she said. The hurricanes turned a steady increase into a wild ride. Shippers often "took a hit" in terms of higher costs to ensure they could serve their customers.

The economy is still growing, but Snider sees uncertainty ahead for shippers and 3PLs, caused by tightening transportation capacity, the electronic logging device (ELD) mandate, and the service demands of the Amazon era. "You used to ship high volumes of goods on a low frequency, and e-commerce has flipped that to low volumes on a high frequency," she said.

A deeper look at the preliminary TIA third- and fourth-quarter data clearly shows the extent of the increase in freight volume handled by non-asset third parties in the second half of 2017. LTL, truckload, and intermodal shipments all increased year over year in October and November, and also rose sequentially from the third quarter as US GDP expanded.

LTL volumes handled by the 3PLs survey rocketed in the first two months of the fourth quarter, rising 33.2 percent year over year. In the third quarter, total LTL shipments rose 15.8 percent on an annualized basis. "Mathematically, the run rate nearly doubled in the early fourth quarter," Christos said. On a sequential basis, LTL volume increased 7.4 percent in the third quarter.

Several factors could account for the LTL gains by 3PLs. First, e-commerce is pushing more shipments toward LTL carriers, which are eager to expand in the fast-growing sector, as middle-mile carriers connecting sortation and distribution centers and as last-mile service providers. More 3PLs may be using LTL partners in both of those shipment legs.

Second, truckload freight may have shifted to LTL in certain lanes as capacity tightened. Shipment weights at LTL carrier Estes Express increased throughout 2017, CEO Rob Estes said in a November webinar. "It's possible that because truckload pricing got so aggressive, there could be environments where folks reached out to LTL," Christos said.

Truckload volumes, the majority of 3PL freight, rose 12.4 percent year over year in those months, and intermodal shipments increased 7.8 percent. That is a dramatic improvement from the 2017 third quarter, when LTL shipments were up 7.4 percent, truckload volumes increased 6.5 percent, and intermodal traffic 3.9 percent year over year, according to the TIA.

The TIA's data also show the impact of rising spot market truckload rates, which soared by double digits year over year in the fourth quarter and hit record highs by year end. While the invoiced amount per LTL and intermodal loads climbed 1.9 percent and 2.4 percent, respectively, the amount invoiced by 3PLs per truckload leaped 16.8 percent as spot rates shot up.

Tighter 3PL profit margins in the second half of 2017 reflected the inability of many 3PLs to quickly recoup rising transportation costs from shippers. “It takes time for the 3PL community to react to those increases, to go to the customer and say, ‘Here's what's going on. We need to have a discussion,’” Christos said. In early 2018, those discussions likely have begun.

“Shippers will continue to see higher prices in 2018,” said Doug Waggoner, CEO of Echo Global Logistics. This year, "you’ll find carriers will be more selective on freight," he said. "They’ve got to optimize utilization and yield. I would expect not only truckload capacity to tighten, but LTL carriers to be more discerning about the freight they take and more surgical in pricing.”

If the US economic trajectory holds and truck capacity remains tight, 3PLs' domestic transportation management revenue could rise 9 to 10 percent in 2018, according to logistics consulting firm Armstrong & Associates. E-commerce-related revenue is a small share of total 3PL revenue, but is expected to grow by double digits, creating fresh challenges and opportunities. In particular, e-commerce is putting pressure on distribution and fulfillment networks that must work at faster speeds and hit increasingly narrow delivery targets.

In the Amazon era, logistics providers need to learn to “think more like shippers,” said Snider, who joined AFN Logistics last year from Kraft-Heinz, where she was supply chain senior manager. “My role here is to help this team think like a shipper and help customers utilize transportation and freight spend more as a strategic advantage,” she said. Both parties need “a strategic partnership rather than a transactional relationship. That plays into where the market is today. Customers who have tried to play the low-cost game are really feeling the pain.”

As the electronic logging era unfolds, "3PLs are in an even better position to help customers find solutions through technology by integrating additional visibility that didn't exist before," Christos said. The ELD will provide a new "feed" for software tracking vehicles and shipments and transportation management systems that 3PLs can provide their shipper customers.

About 70 percent of the 3PLs surveyed by The Journal of Commerce, TIA, NASSTRAC, and Truckstop.com last autumn said they planned to increase spending on technology in 2018, with visibility a core interest. "As much as we can, we need to use real-time data and historical knowledge to make more educated decisions, to foresee price increases," Snider said.

That data will help shippers and 3PLs better plan not just for spikes in pricing but strategic shifts in supply chains, she said. “We’re not just moving freight, we need to have larger discussions. A lot of shippers feel they need to keep their knowledge close to the vest, but being more transparent about demand changes will 100 percent affect your supply chain.”