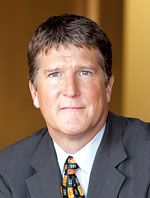 Connor will succeed Arild B. Iversen, who is moving into a new role as consultant to the parent companies, Wallenius Lines and Wilh. Wilhelmsen, as well as WWL. Iversen served as president and CEO of WWL for six years.

Connor, currently deputy CEO and chief commercial officer, will be based at the company’s headquarters in Lysaker, Norway. He has more than 32 years of experience in the logistics industry and has held a range of positions, including president of WWL Americas and CEO of WWL Vehicle Services Americas, based in Woodcliff Lake, N.J.; chief operating officer of ocean services and global head of commercial, based in Oslo, Norway; and other commercial and executive positions in Asia and Europe.