Chicago — not just a hub, a high-tech logistics magnet

Chicago — not just a hub, a high-tech logistics magnet 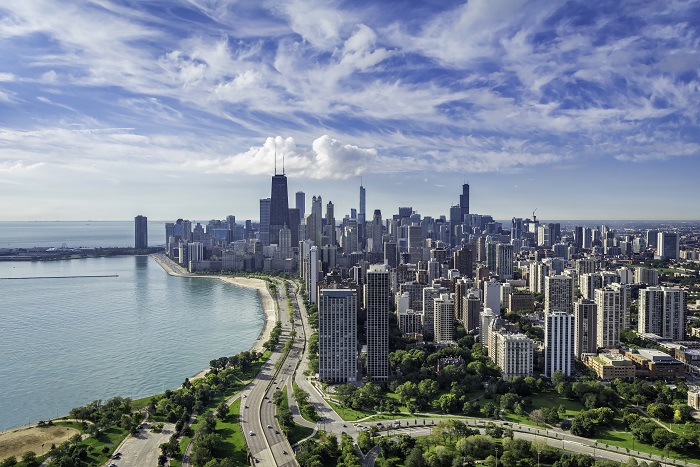 “No one’s coming to save us,” Bobby Harris, president and CEO of BlueGrace Logistics, tells shippers. He’s talking about the tight-capacity, high-priced, surface transportation market, which he expects will continue until late 2019. One BlueGrace solution — it is going to Chicago to hire help. (Above: Chicago, with Lake Michigan.) Photo credit: Shutterstock.com.

Chicago draws logistics business like Hollywood draws actors, or a lamp draws moths. The city’s importance as a logistics hub predates even Mrs. O’Leary’s cow, blamed, rightly or wrongly, for starting the fire of 1871.

As the United States and its people moved west, Chicago became the crux in America’s railroad backbone. Today, Chicago still is the most important rail center in North America, but it’s also a high-tech logistics hothouse.

“There’s just such a surplus of talent there, at a time when we’re looking for a lot of talent,” Bobby Harris, president and CEO of BlueGrace Logistics, said shortly after BlueGrace opened an office in downtown Chicago in May.

“The market we’re seeing now will be around for quite some time. We need to add a lot of capacity and a lot of professionals,” he said. Chicago “is a rich source of talent and resources, whether it’s truckload capacity or sales reps.”

Third-party logistics providers (3PLs) such as BlueGrace will need resources to guide shippers through the tightest, costliest freight market since the early 2000s. Harris’s advice to shippers: “Whatever you think you’re doing really well, think another step.”

At this point, “everyone knows capacity is tight,” Harris said in an interview. “The question is how long will it be this way? My belief is that it’s going to be a tight market, in truckload and less-than-truckload [LTL], into late 2019.”

Since the mid-2000s, Chicago has experienced a logistics explosion, with non-asset, 3PL, and technology companies large and small opening shop and tapping a young, tech-savvy workforce.

Coyote Logistics, now part of UPS, and Echo Global Logistics were both founded in 2006 and now are billion-dollar-plus 3PLs. Along with several other Chicago 3PLs, they are the original third-party logistics “disruptors.”

Tampa-based BlueGrace is part of the tech-based logistics community that has grown rapidly over the past 10 years. The 3PL has been on the Inc. 5000 list of fastest-growing firms five times, including last year, ranked at 3,744.

Harris founded BlueGrace as a technology firm in 2007. Previously, he was a franchisee with freight forwarder United Shipping Solutions and worked at LTL trucking companies Southeastern Freight Lines and Yellow Transportation.

That year, Bluegrace got a $255 million infusion of cash from private equity firm Warburg Pincus. The investment helped the 3PL expand in its core LTL trucking market and buy back franchised BlueGrace operations.

“We brought back virtually most of our franchises with the exception of a few,” Harris said. “We’re 95 percent direct-owned now.” In Chicago, BlueGrace’s new office is in the Chicago Board of Trade Building, a landmark skyscraper.

Eighty new hires will staff the office, which opens July 9. “We expect to make continuous investment [in the office] and we’re bullish on it. There’s a reason some of the biggest and most successful logistics firms are in Chicago.”

One reason is some of the biggest and most successful users of logistics services are there too. McDonald’s this Monday opened a new $250 million, 550,000-square-foot headquarters building in Chicago’s West Loop.

Online grocer Peapod on Tuesday opened its new headquarters at 300 S. Riverside Plaza in the West Loop, next to the Chicago River, relocating all of its corporate employees from the northern suburb of Skokie, Illinois.

Facebook and Google both plan to add more than 100,000 square feet to their Chicago offices and hundreds of workers, according to Built in Chicago, an online community for technology entrepreneurs, and the Chicago Tribune.

The tech giants compete with logistics companies for the same base of young, educated, technology workers. In Chicago, “We’ll have new hires out of college, and we’ll get supply chain professionals with experience,” said Harris.

They’ll need that experience, he suggested, in the year to come.

He pointed to the Institute for Supply Management’s monthly indices, which showed the US economy expanding both in services and manufacturing in May. The good news is “we’re not finding the monster under the bed.”

Shippers need to put finding capacity “up on the top,” Harris said. “We’re getting a lot of business from people who just can’t get what they need and they’re worried about how it will look over the summer and next winter.”

“No one’s coming to save us,” he said. “We’re going to have to deal with this market for a long time. More drivers, that’s not going to happen, and automated trucks are way too far in the future in this time frame.”

Even so, for 3PLs and carriers, “there’s a lot of opportunity,” he said. “The very good firms will do exceptionally well, smaller firms with fewer resources not as much.” The question for shippers, he said, is “how to optimize what we do.”

The JOC Inland Distribution Conference will be held in Chicago, Oct. 22-24. For more information and to register, visit https://events.joc.com/inland-2018.