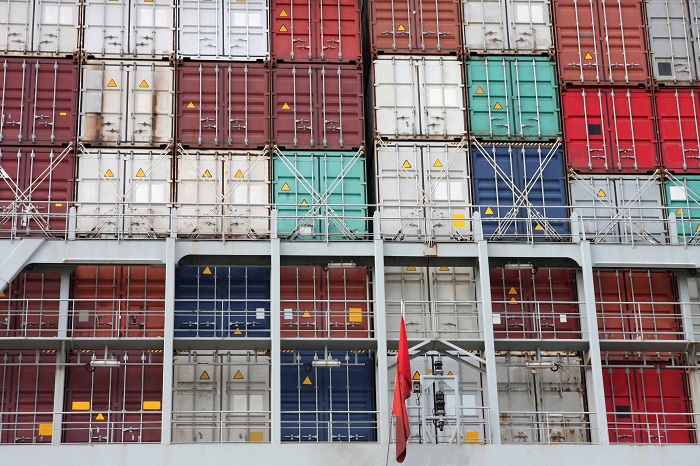 Containers at the Port of Hamburg. (Photo credit: Shutterstock.)

Global freight forwarder Kuehne + Nagel (K+N) suffered a fall in earnings from ocean freight last year, but the impact on its overall results was offset by higher profits from air freight, overland transport, and contract logistics. Its gross profit (turnover less duties and freight expenses) across all divisions grew by 7.2 percent to 7.02 billion Swiss francs ($7.48 billion), while group net earnings were up by about 3 percent to 740 million Swiss francs.

K+N’s largest business segment, sea freight, was struggling with general rate increases by container lines that it could pass on to customers only partly and with delay, it said. The result was a drop in the average gross profit margin per TEU from 350 Swiss francs in 2016 to 325 Swiss francs last year.

Although the world’s biggest ocean freight forwarder gained market share, increasing its TEU bookings by 7.5 percent (versus about 5.0 percent market growth) to 4.4 million TEU, its overall gross profit from ocean freight remained static at 1.416 billion Swiss francs. The division’s operational result slipped by 7 percent to 414 million Swiss francs as internal efficiency gains and increased demand for more complex solutions for perishable goods and for less-than-containerload cargoes could not fully compensate for the margin pressure.

K+N’s CEO, Detlef Trefzger, offered a more positive outlook for this year though, stating that "from a structural point of view, sea freight margins should stabilize." Carrier rates are likely to remain firm and less volatile throughout the year following consolidation among container lines that should make it easier to cope with for freight intermediaries, Trefzger explained.

Meanwhile, K+N’s other divisions all posted improved earnings, particularly overland transport and contract logistics, with earnings before interest and taxes increases of 75 percent and 9.5 percent, respectively.

Investments this year will be focused on new digital solutions for services and internal processes, as well as acquisitions, K+N said. The group has set itself ambitious financial targets for the coming years, including a rise in return on capital employed from 64 to 70 percent by 2022. Its volume expectations for ocean freight this year are a bit more cautious, with project market growth in loaded container traffic forecast at 4 to 5 percent versus last year.