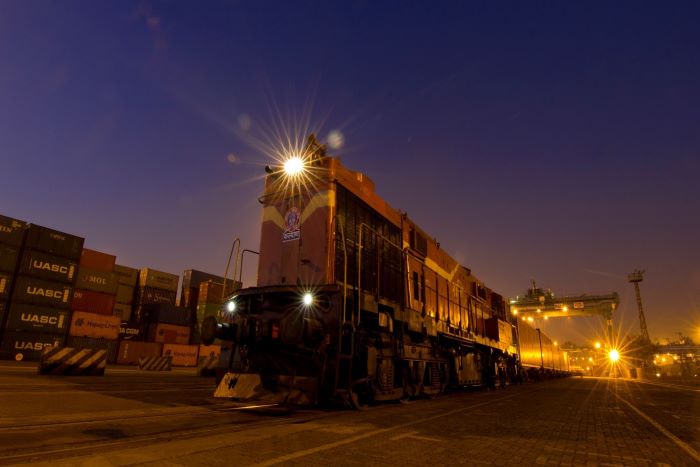 JNPT’s railed cargo intake from India’s northern hinterlands has taken a hit in recent months, as shippers said they were constrained by a lack of connectivity options. Photo credit: APM Terminals Mumbai.

As the pace of Indian port growth begins to buckle under a weakening economic environment, Jawaharlal Nehru Port Trust (JNPT) is making a more aggressive effort to attract business from northern hinterland shippers using other west coast gateways by offering them a dedicated rail solution for export cargo.

JNPT saw a 5 percent drop in October throughput following a 7 percent fall in September, year over year, according to JOC data.

In response to feedback received during a recent trade session, the port has set up a scheduled intermodal rail service with Container Corporation of India (Concor) to connect export cargo from Ludhiana, a key inland container depot (ICD) in the state of Punjab. The service will operate weekly, offering departures from Ludhiana every Saturday.

JNPT said the port’s railed cargo intake from Ludhiana and its adjoining hinterlands has taken a drastic hit in recent months, as shippers at the session said they were constrained by a lack of connectivity options.

“During the interactive session, exporters highlighted the fact that there was sufficient export cargo in Ludhiana and its catchment area. However, railways and Concor were not providing outgoing rakes [trains] to JN Port, resulting in a shift of export cargo through other western ports,” the port authority said in a statement.

JNPT also said it has had to seek intervention with senior officials at the ministries of shipping and railways to secure government approval for the new rail route. Further, the port said Concor will provide capacity to private rail companies seeking to participate in the trade route to maximize the fluidity of containers placed onto the rails.

In a separate customer advisory, Concor said the weekly service will help speed up the movement of exports bound for JNPT, thereby improving on the current inland transit time along with other predictable cost gains.

The Ludhiana ICD caters to a vast interior market that includes the states of Himachal Pradesh, Haryana, and Rajasthan. With an expansive network of more than 80 ICDs nationwide, Concor commands the bulk of Indian containerized rail transportation.

JNPT rail mix on the rise

Aside from rehabbing market share lost to rival ports, with Mundra Port being the most obvious beneficiary, the rail upgrade could open an opportunity for JNPT to further accelerate its rail movement that has been on a steady increase following the Aug. 1 conclusion of a broader inter-terminal arrangement for mixed train operations.

Powered by unhindered rail interoperability, JNPT lifted its combined ICD contribution to an all-time high in October, at 18 percent, up from about 15 percent in the past. On average, the port currently sends and receives nearly 20 trains daily, a Concor official told JOC.com.

While that upward trend is significant, larger, steadier freight conversions are imperative for the port to get even closer to the 25 percent rail target set by the government for greater landside productivity by taking more cargo off the congested road network. Thanks to automation and other proactive measures, JNPT truck turnarounds have gained traction, but truckers have their eyes on the completion of a 27-mile expressway connecting the harbor with the interstate highway system for sustained relief from congestion issues. The project is already more than two years behind schedule, with no clear indication at present on a revised timeline.