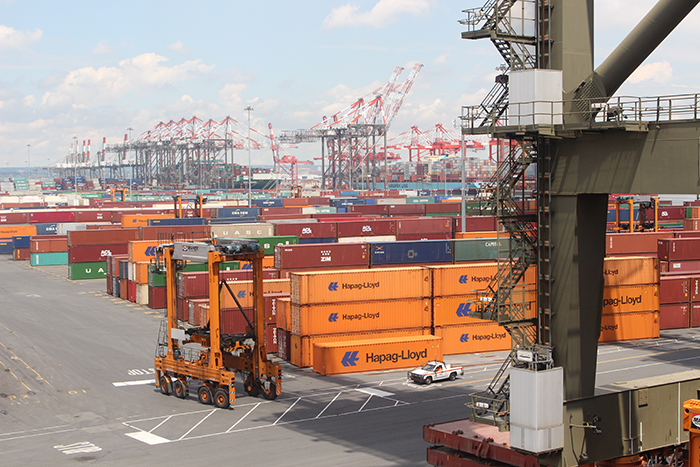 Users of the Port of New York and New Jersey must balance their drayage costs with those of industrial real estate in the largest US metropolitan area. Photo credit: Hugh. R. Morley.

A nearly 40 percent hike over the last six years in average lease rates for warehousing close to the Port of New York and New Jersey has helped push rates to close to $10 per square foot in the port center, sparking questions of whether the area can handle rising container volume growth.

The expansion of the main marine terminals, achieved in part by demolishing warehouses, and the necessity of providing space to create equipment storage yards, along with the voracious demand for space close to the port, have created fierce competition for the little space available.

Tension over the crunch has sparked a number of disputes in recent months, including a complaint to the US Federal Marine Commission by a company pushed out of port warehouse space, and a plan to create space in the port by moving non-port related businesses out of the immediate port area.

Availability rates in four areas in and around the ports have fallen, from 7.9 percent in 2012 to 6 percent in the third quarter of this year, well below the average of 6.8 percent for New Jersey as a whole, according to figures provided by CBRE, the real estate firm. The average asking rate on leases rose steadily in the four areas, from $5.41 per square foot in 2012 to $6.37 per square foot in 2016, according to CBRE. In the first three quarters of this year, it increased to $7.55, about 40 percent above the 2012 figure. But rents close to, or in, the port can now run as high as $9.50 or more — with a few locations getting $12 per square foot, said Mindy Lissner, executive vice president of industrial & logistics in CBRE’s East Brunswick, New Jersey office.

It is a problem faced by many urban ports with severely limited space as they seek to cater to larger ships that are expected to unload greater volumes of cargo in shorter time, dramatically increasing the stress on port resources. The price for failing to adjust to that shift could be congestion, delays, and shippers looking to send their goods through other ports.

In New York-New Jersey that has been brought into sharp focus by the elevation in June of the Bayonne Bridge, enabling mega-ships to enter three major terminals that were previously off-limits to ships above 9,500 TEU, and the expansion of the Panama Canal a year before, which also is expected to send more big ships to the East Coast.

“So a lot of developers are purchasing older distribution buildings, or even an old office building and knocking them down and putting up state of the art industrial properties,” she said. “And there is such a limited supply that the majority of them are pre-leased prior to completion of construction. As a result, land costs continue to rise and rents are hitting numbers that we never thought we would see.” More than 60 percent of the industrial space taken so far this year in the port area was taken by logistics and distribution companies, CBRE said.

The space crunch is made more severe in New York-New Jersey by the density and size of the New York metropolitan market nearby, where there is little vacant land available and new projects generally require demolition and, often, environmental cleanup. The squeeze is further exacerbated by demand from e-commerce companies, and their service providers, for warehouse space from which to provide speedy, last-mile delivery to the massive New York-area market.

“When these ports and terminals were developed we were doing a fraction of the trade we are handling today,” said Bethann Rooney, assistant director, port commerce department, Port Authority of New York-New Jersey. “The population was much smaller than today. We were able to spread out, and in spreading out, you had elbow room. You don’t have elbow room today.”As a result, the authority is in a constant process of trying to increase efficiency on the finite land space — about 3,000 acres — controlled by the port authority, Rooney said. The current situation is nowhere near a crisis, she said, and the authority believes that it can handle an increase of as much as 40 percent to the 6.5 million loaded and unloaded TEU volume it already expects to see in 2017 on the existing footprint. But a masterplan the authority expects to finish next year will include a study of the port’s land use needs over the next 30 years, during which cargo volume is expected to rise substantially, she said.

“You have a finite amount of space, cargo is growing, demand is going to continue to grow,” she said. “You need to use the space that you have better and smarter. How do you do that?”

For years, as the volume of cargo through the port has increased steadily, shippers and logistics companies — unable to find reasonably priced space in and around the port — set up shop in several logistical boom zones that sprung up nearby — in central New Jersey and the Meadowlands and Lehigh Valley in Pennsylvania. Since 2012, the volume of loaded containers handled by the port — where the six marine terminals together cover about 1,500 acres, most of it in New Jersey, and terminals for cars, bulk, cruise lines, and other items cover another 1,500 acres — has increased by 6 percent, to 4.56 million TEU, figures from the Port Authority of New York and New Jersey show. Through October this year, the volume of loaded TEU has increased by 5.4 percent, the figures show.

Some companies need to be close to or in the port, however — among them terminals, equipment providers, and truckers and warehouses that handle overweight cargo that is too heavy to move on regular roads.

Real estate brokers say demand for space in the port is relentless, despite the high leasing rates. Customers closely analyze the play off between paying more for rent in or near the port, but enjoying reduced drayage costs, with that of paying lower rent for space away from the port that also comes with higher trucking costs to move the cargo there.

“They are not going to locate there if they could locate down at exit 12, exit 8a” on the New Jersey Turnpike, said Mark Shearer, senior vice president in the New York-New Jersey office of Prologis. But the operation of some companies means they need to be close to the port, he said.

He cited the example of a 540,000 square foot property built on the port’s edge by Prologis in Elizabeth and occupied in December by Fedway Associates, a major liquor distributor that needed the benefits of the port’s overweight corridors to move heavy cargo to the distribution center.

Likewise, Jamie Overley, CEO of East Coast Warehouse — which this month closed on 200,000 square feet of warehouse space in Jersey City, from which the company will service the GCT Bayonne Terminal — said his main focus is finding additional space closer to the port.

He said he needs port proximity so that his refrigerated cargo can travel on roads that are designated to carry overweight cargo, and added that it gives a “huge advantage” for customers, reducing time and costs. With 15 to 20 percent annual revenue growth in recent years, he said, “we are always looking for space.”

He said that even after sealing the Jersey City warehouse deal he continues to look for more warehouse footage. Yet the port’s space crunch means he also is considering alternative options that could involve taking warehouse space outside the port, or even sending goods through other ports, he said. A year ago, East Coast Warehouse opened a 50,000 square foot warehouse in Philadelphia, which he manages for the US Customs and Border Protection, and is looking to expand his company’s cargo handling capabilities there in the future.

To meet the needs of overweight cargo shippers, the port is in the process of securing approval from New York Ctiy Department of Transportation to create an overweight corridor around the New York Container Terminal, Rooney said. The terminal is far less used at present than the four main terminals in the port.

The increasing pressure on port resources from the space squeeze, and the high cost of real estate in or near the port, has emerged in several ways in recent months. APM Terminals in Elizabeth this year became the last of the four main terminals in the port to conclude that it could no longer provide chassis storage on the terminal. As a result, the two providers once based at the terminal — TRAC Intermodal and Direct ChassisLink Inc. (DCLI) — had to relocate to two other locations, beginning earlier this month.

DCLI cited APM’s decision, and the uncertainty it created for the chassis provider over where it would relocate to, as the reason it pulled out of a portwide “gray” chassis in July. The pool, a planned partnership with Flexi-Van Leasing, had until then been considered a done deal, and its demise derailed a top priority among port stakeholders — that of creating an interoperable chassis pool.

In May, the International Longshoremen’s Association (ILA) said that “insane” rents for the near-dock chassis deports at the Port of New York and New Jersey threatened the port’s competitiveness and could affect union jobs. Dennis Daggett, executive vice president of the ILA and president of the union’s Local 1804-1, said the Port Authority of New York and New Jersey was trying to squeeze intermodal equipment and depot operators on rental of near-dock property. Daggett said the high rents were “going to drive business to other ports.”

In August, a Port Authority tenant — Port Elizabeth Terminal & Warehouse Corp. —  filed a complaint with the US Federal Maritime Commission claiming that the authority unfairly forced it to give up 550,000 square feet of warehouse space, incurring millions of dollars of relocation expenses over three years. Much of the space was needed by Port Newark Container Terminal, so that it could expand, the complaint said.

The City of Newark, in which much of the port is located, in March released a plan to seize by eminent domain about 50 properties in a run-down area next to the port — which also has been designated an overweight corridor — known as Doremus Avenue.

The goal of the plan, which is still before the city planning board — and is opposed by some businesses — is to clean up the area and prepare it for industrial use, said Carmelo Garcia, executive vice president and chief real estate officer for Newark Community Economic Development Corp., which is promoting the project. The Doremus Avenue area under scrutiny, which is about 1,100 acres in size and about 20 percent is slated for seizure, includes a number of junkyards, trailer and container storage yards, and vacant land, as well as some waterfront parcels.

One idea under consideration by the city is to offer the cleaned up properties in a land swap, so that non-port related businesses could be moved out of the port area and onto Doremus Avenue, leaving more space for port-related businesses in the port, he said.

“Everyday we have different brokers and angry tenants knocking on our door, talking about demand” for real estate in the area, triggered by the expansion of the Panama Canal and the raising of the Bayonne Bridge, he said. Much of it comes from logistics and distribution companies that say “we want to have a better usage on the port, or Doremus Avenue,” and they are willing to pay premium rates for it, he said.