If you build a port-adjacent, three-story DC, will BCOs come?

If you build a port-adjacent, three-story DC, will BCOs come? 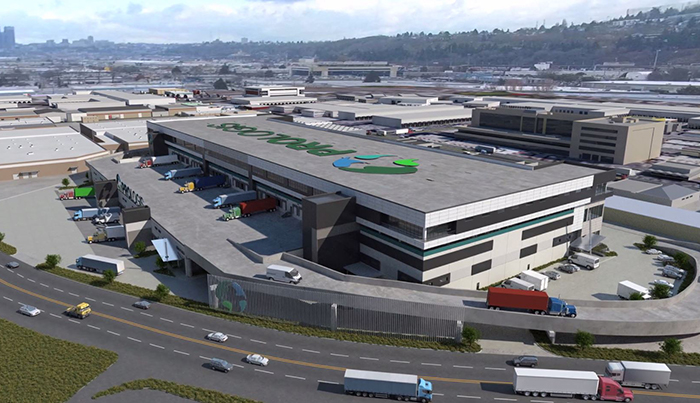 An artist's rendering of the three-story distribution facility under construction near the Port of Seattle.

Prologis last week broke ground in Seattle on the first multi-story distribution center at a major seaport, raising questions of whether the concept, widely used in Asia, will attract enough beneficial cargo owners (BCOs) needing speedy delivery to customers or be regulated to a one-off.

Prologis is building a three-story distribution facility two miles from the Port of Seattle and five minutes from the city’s downtown. The 590,000 square-foot distribution warehouse, to be built on a 13.5-acre site in the Georgetown district of Seattle, will streamline the connection between the Northwest Seaport Alliance of Seattle and Tacoma and consumers in the region. “We are building for the first-mile activity and for the last mile,” said Dan Letter, Prologis’ managing director for the Pacific Northwest. The facility is being built on spec.

With vacancy rates for industrial real estate properties in some major seaport cities at 3 percent or less, and virtually no sites available for the 500,000 to 1 million square-foot facilities that operators of import and regional distribution facilities are looking for, it became apparent to Prologis that US developers will have to do what developers in Asia and Europe have been doing for more than a decade, which is to build multi-story facilities at urban in-fill locations.

Prologis sees similar opportunities in the East Bay region close to Oakland, Los Angeles-Long Beach, and New York-New Jersey, but to make this happen, industrial real estate developers must attract big BCOs that cross-dock or transload large volumes of merchandise from marine containers to domestic trailers without the packages ever touching the floor. Jon DeCesare, president of WCL Consulting, said it is fitting that Prologis chose to build its multi-story facility in the home city of Amazon, which has changed consumers’ habits to expect delivery of their orders within an hour or two. “It’s really a horse race to market,” he said.

DeCesare estimated that in a congested seaport city on some of the most valuable land there is, rents at a close-in distribution facility will have to be three times what is charged in traditional distribution hubs such as the Kent Valley in Washington or the Inland Empire 50 miles east of Southern California. Although drayage costs from those harbors to the nearby warehouses will be less, speed to market will trump the shorter truck trips on the BCOs’ list of priorities, he said.

Prologis is deploying a flexible design that can accommodate import distribution, regional distribution, and e-commerce fulfillment, Letter said. The first two stories, which will have truck-ramp access, are designed for transloading and cross-docking. The third story, which will be served by large freight elevators, will be suitable for storage of merchandise and replenishment.

Logistics experts see several factors converging to at least get industrial real estate developers and BCOs considering the feasibility of multi-story distribution facilities near major US seaports. Highways are congested and the cost of trucking is increasing due to regulatory changes and an emerging driver shortage. Even distant locations such as the Inland Empire in Southern California are becoming built out, and what land is left is selling for a dear price. Possibly of greater importance, the explosion of e-commerce and the need to rapidly fulfill orders within urban cores are creating a market for serving the consuming populations in port cities.

Industrial vacancy rates in seaport-adjacent locations are hitting record lows now that the economic recession of 2008 to 2009 is a distant memory. In the third quarter of 2016, the vacancy rate in metropolitan Seattle was 1.8 percent, in the Los Angeles basin 0.9 percent, and in the Oakland-East Bay region 2.4 percent. Even in the further-out distribution hubs of the Kent Valley and Pierce County in Washington, the vacancy rate was 2.2 percent, and in the Inland Empire about 50 miles east of Los Angeles-Long Beach, about 4 percent, according to real estate firm Jones Lang LaSalle.

Being able to provide almost 600,000 square feet of distribution space close to a port and a large consumer market could be attractive to large BCOs and e-commerce fulfillment companies, said Dean Tracy, managing director of Global Integrated and a former logistics executive at Lowe’s Home Improvement. “It makes sense for a big-volume BCO that makes a lot of turns, but for the smaller guy, no,” he said.

Fred Johring, president of Golden State Express, cautioned that land in immediate harbor areas is so costly, $2.8 million an acre in Los Angeles-Long Beach, that volume and high velocity are crucial. “If you put it on the floor closer to the port, it won’t work,” he said.

Even though the shorter truck haul from the harbor is attractive, it probably will not be the deciding factor in attracting customers. The cost of harbor drayage is front-loaded in the port segment of the move because taking delivery of an inbound container takes one to two hours. A recent survey of drayage companies by WCL Consulting found that the average drayage cost from the port complex to Carson, California, about 11 miles away, is about $318. The drayage cost to the distribution hub of Ontario, a distance of 55 miles, is $543, DeCesare said.

On the other hand, if volume and velocity are at work, and the BCO or third-party logistics provider wants a location near a seaport, an infill location will be required. Although many seaport cities have available infill locations, such as former manufacturing sites, that are relatively close to the harbors, the acreage is such that single-story buildings of 100,000 to 200,000 square feet are all that can be built on those sites. By building up, the square footage of the structures can be tripled.

Industrial real estate developers will closely watch the development of the Seattle facility, but it appears unlikely that it will set off a rush of activity in the multi-story sector. Blaine Kelley, senior vice president global supply chain at CBRE, said it is “very early” in that phase, and further projects will be geographic-specific. Given the environmental and local community restrictions involved in developing infill sites, and the complexities involved in building a multi-story warehouse, “it’s not a trend yet,” he said.

On the other hand, due to rapid growth of e-commerce, and the population densities of many port cities, the proximity to the harbor and to end consumers makes a compelling argument for future multi-story developments. E-commerce fulfillment is all about customer service and rapid delivery, so combining proximity to the point of importation and the consuming market could make certain port cities candidates for these structures, Kelley said. Nevertheless, with possibly 50 to 100 large BCOs as likely candidates for multi-story structures at infill sites, he sees future developments as being “opportunistic” rather than trend-setting.

Building any type of distribution facility at an infill location in a densely-populated region requires close attention to sustainability, and Prologis is including in the project a number of sustainable features, including a LEED-certified structure, so the Seattle project should fit seamlessly into the community. “We’re proud of that,” Letter said.

Global Shipping Outlook: A Sneak Peek at 2021
Port Performance North America: Managing Cargo Flow During a Pandemic — and Beyond
END_OF_DOCUMENT_TOKEN_TO_BE_REPLACED