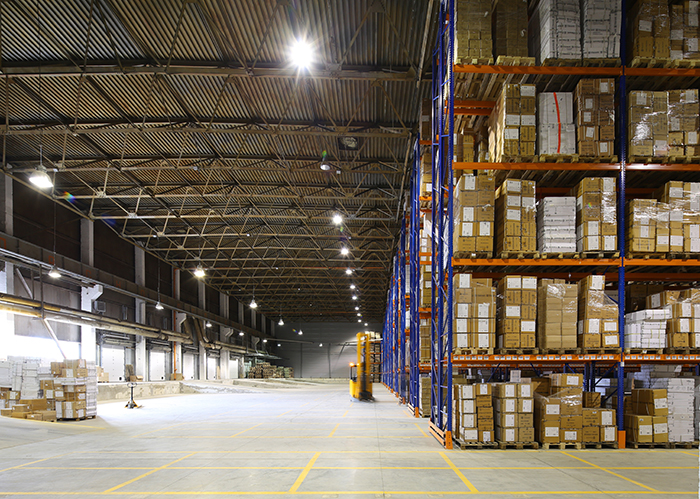 Areas with easy access to the largest US metropolitan areas reported the greatest growth in mega-warehouse construction.

The shift from brick-and-mortar shopping to e-commerce has triggered a boom in the construction of extra-large warehouses topping more than 1 million square feet in size as retailers scramble to manage the additional space demands needed to ship goods straight to the consumer.

Nearly 120 such mega-warehouses, with a combined total of 141 million sq ft, were built in the 10 busiest real estate markets between 2010 and 2016, according to a new report from CBRE group. Another 29 similar-sized buildings that together total 31.5 million sq ft are on the way.

Underscoring the trend, a report on the industrial warehouse market to be released by Jones Lang LaSalle this week said five leases in excess of 1 million sq ft were signed in the fourth quarter alone. 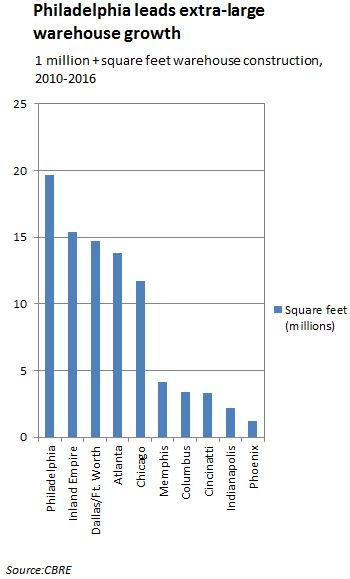 “Mega-box and big-box spaces continue to be in hot demand,” JLL said.

The warehouses have sprung up in areas that have sufficient space for such large buildings and are close enough to large population centers to get goods there in a timely fashion. Top of the list, with 16 such warehouses, is the Philadelphia region, which includes south Jersey and the fast-growing Lehigh Valley region north of the city and on the New Jersey border, which is equally distant from Philadelphia and New York, the report said.

The Inland Empire, about 50 miles from Los Angeles, has 13 such warehouses, as does the Dallas/Forth Worth area. Rounding out the top five are Atlanta, with 12 mega-warehouses, and Chicago, with nine, the report said.

The locations broadly reflect the scramble by e-tailers and support logistics industries to find warehouse space of all sizes that are close enough to large consumer conurbations yet far enough away that real estate prices are relatively cheap, with good transport links between the two. Often they are called inland ports, and have good road and rail links to the ports that feed them.

E-commerce warehouses require two or three times more space than regular warehouses because they have more inventory, labor, and automation than other warehouses, the CBRE report said.

Their distance from the market, however, means there is now an aggressive search by e-commerce companies for small warehouse space, located much closer to the market than the typical mega-warehouse and from these smaller warehouses many of the purchases are dispatched, said David Egan, CBRE’s head of industrial and logistics research in the Americas. He likened mega-warehouses to the “back room” of a traditional retail store, which is supplied by the distribution center and then supplies the shelves in the store.

The rapid pace of mega-warehouse construction is likely to continue for a while, even if the economy slows, because there are no signs that the transition from mall and store shopping to online purchasing is slowing, Egan said.

“Generally speaking, the supply chain is getting much deeper, more buildings, more locations, trying to get greater access to the consumer base in a shorter period of time,” he said. “What that has meant is that we have a need for more big bulk regional facilities.”

Where retailers in the past could get by with one mega-hub in each of the East, West, and center of the country, they need one close to each market, he said.

“The demand for this kind of product isn’t necessarily going to go away when the economy changes because of the structural fundamental changes in the way the users are going to market,” he said.

All that aside, the warehouse market does not appear to be ready to turn downwards. The JLL report said industrial warehouse of all types grew in 2016, and the industrial warehouse space vacancy rate dropped to a “new record-low” of 5.6 percent. Leasing activity grew in 11 consumer-related industries, from 4 percent in the paper and packaging industry to 12 percent in the consumer durables sector, the report said.