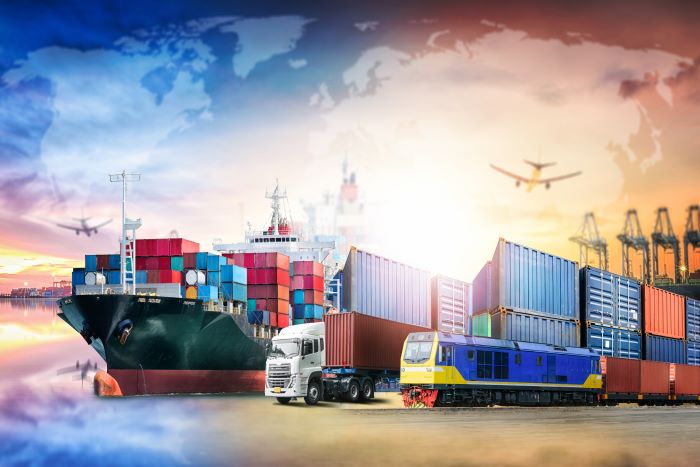 The e-commerce surge is pushing the bounds of available capacity most sharply in Western intermodal rail, in the cargo holds of freighter and passenger jets, and in last-mile delivery. Photo credit: Shutterstock.com.

A wave of e-commerce volumes is stretching US freight capacity, sharpening the divide between the largest shippers and their smaller counterparts and underscoring the need for importers to diversify their routings — if they can.

The e-commerce surge is pushing the bounds of available capacity most sharply in Western intermodal rail, in the cargo holds of freighter and passenger jets, and in last-mile delivery. The cargo of Amazon, Walmart, Target, and many small and medium-sized e-tailers is soaking up capacity in the truckload and less-than-truckload (LTL) markets, and fueling a surge of Asia imports. With air cargo rates out of China up at least 25 percent from a year ago, according to the TAC Index, emergency shipping to avoid stockouts is even more critical.

The flood of orders for items purchased online rides atop a wave of inventory replenishment further stretching capacity limits. And when space gets tight, it’s the smaller e-retailers that get squeezed. In a July 30 second-quarter earnings call, UPS signaled to small parcel shippers to prepare for higher rates and surcharges as it looks to align pricing with the value it believes it provides.

However, equally concerning for shippers are potential delays as planning for peak holiday season revs up and available carrier capacity gets snapped up. Shippers reported delays and volume caps during April, May, and June as FedEx and UPS struggled to meet service commitments. Another repeat during the holiday season will not be welcomed by shippers. In addition, those shippers that do not score enough capacity will end up paying more for shipping and run the risk of delivery delays.

Similarly, in reporting that net sales jumped 40 percent year over year in the second quarter, Amazon warned that third-party sellers will find it even harder to get transport capacity as its fulfillment centers are packed and one- and two-day delivery has yet to be fully restored. “We need to build the inventory more for the fourth quarter, and we’ve run out of space,” Brian T. Olsavsk, Amazon's chief financial officer, told investors on July 30.

Thanks to unemployment insurance payments to help those out of work due to the coronavirus disease 2019 (COVID-19), Americans' personal spending spiked in June, as reflected in FRED data, said Jason Miller, associate professor of logistics at Michigan State University, citing Federal Reserve Economic Data. That extra cash in pockets and bank accounts drove consumers to boost their purchases of patio furniture, exercise equipment, home improvement supplies, and other comforts for staying home. Unsurprisingly, demand for back-to-school and seasonal apparel from Asia is lackluster, forwarders and carriers tell JOC.com.

And while the sharp increase in e-commerce volumes may never be seen again due to COVID-19 exacerbating the swing, the surge raises questions on how the freight shipping industry will adapt to goods ordered online making up a much larger slice of total shipments. Before the pandemic, e-commerce was growing steadily, accounting for 11 to 12 percent of all retail sales, “Is this a permanent jump or transitory jump that will fall when we get on the other side of the pandemic?” Miller asked.

Asian imports on the water

In a broader sense, the shipping industry is asking just how sustainable the surge will be. From the ocean side, carriers, forwarders, and importers expect eastbound trans-Pacific capacity will remain tight through August, and even if there is a dip in early September, there’s the makings of a second peak later in the month. That will keep FEU spot rates about $3,000 per FEU to the West Coast and $3,400 per FEU to the East Coast through September, forwarders and carriers tell JOC.com.

“We’re getting clients calling regularly saying they are upping their forecasts, that they are not going to be able to get additional space at the rates they contracted for, so [these large beneficial cargo owners] are looking for spot-market space, and for an extended period of time,” said Kurt McElroy, executive vice president of Apex Maritime.

The capacity constraints continue on the landside. Drayage truckers and marine terminals at the Los Angeles-Long Beach port complex say chassis are in short supply, as they are whenever there’s a rush of inbound shipments. DCLI, the top chassis provider, counters that there are enough chassis.

The capacity picture for forwarders and shippers doesn’t get any better outside the marine terminal. A sharp uptick in domestic intermodal volume, much of it fueled by e-commerce shipments, is forcing the US Western railroads to turn away volume so they can focus on their core customers. After initially imposing a $500 surcharge on some shipments on Aug. 9, Union Pacific Railroad expanded the surcharge to all shipments, starting Aug. 16. Surging UPS volume is absorbing some of that intermodal rail capacity, frustrating some intermodal marketing companies trying to get space on trains.

BNSF Railway is capping how many slots are available for the drop-off of domestic intermodal loads at the Los Angeles Hobart facility. In servicing Amazon and Walmart volume, J.B. Hunt Transport Services is driving up volumes on BNSF’s network, according to three intermodal marketing companies (IMCs) who asked not to be identified.

Tight truckload capacity is priming spot market rates, and at least one LTL carrier has railed empty cars from Chicago to Los Angeles to meet demand for capacity. Spot truckload rates on key California outbound lanes were $1 to $1.40 per mile higher at the end of July versus the low point in April, according to a JOC analysis of data from digital broker Loadsmart and DAT Solutions. Spot truckload rates out of Los Angeles rose 20 percent or more sequentially in July to key markets such as Chicago, Dallas, and Atlanta, according to Loadsmart and DAT Solutions.

The dislocation of transportation assets, layoffs, and illness, coupled with a surge in e-commerce loads has created one of “the most constrained [surface capacity] environments” on record, said Shelley Simpson, executive vice president, chief commercial officer, and president of highway services at J.B. Hunt.

“If you are an e-commerce player in California, this shows the challenges of being dependent on at most two western railroads for eastbound intermodal service,” said Miller. “The brutal reality in business is when capacity is tight you focus on serving your core customers.”

The ports of New York-New Jersey, Charleston, Virginia, and Savannah are best positioned to attract more e-commerce cargo, as they have or will soon have deeper drafts for larger container ships, and intermodal rail connections into the east, said Tim Feemster, managing partner of consultancy Foremost Quality Logistics. But while 75 percent of the US population live east of El Paso, Texas, many e-tailers don’t have the capital to be able to carry enough inventory to support a five-corner strategy such as the biggest retailers have adopted since 2002, following the US West Coast port lockout.

The retailers that can expand their distribution center footprint and diversify their routings are increasingly expanding their presence on the East Coast. Walmart, for example, is building a 3-million-square-foot distribution center in South Carolina that will pull from the Port of Charleston, port officials announced on July 20. The announcement comes on the heels of industrial developers announcing 3.5 million square feet of distribution space near the port of Savannah.

“Inventory control failures in the first half of 2020 — when many companies could not fill orders efficiently — have vividly illustrated the urgency of having more inventory on hand to support online sales,” according to real estate firm CBRE. “These changes are leading to a massive increase in infrastructure spending and modernization of existing logistics hubs, and will put emerging industrial real estate markets in the southeast US on the radar of occupiers.”

Global Shipping Outlook: A Sneak Peek at 2021
Port Performance North America: Managing Cargo Flow During a Pandemic — and Beyond
END_OF_DOCUMENT_TOKEN_TO_BE_REPLACED