US warehouse rents, scarcity rising in 2019

US warehouse rents, scarcity rising in 2019 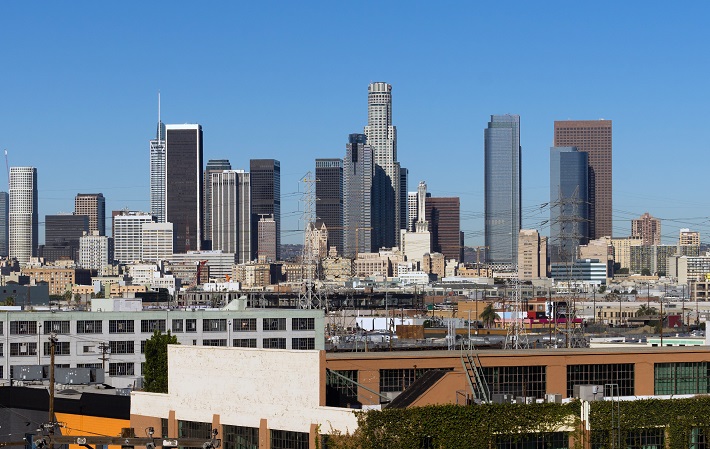 Net asking rents nationwide increased 1.7 percent, to $7.21 per square foot, the highest level since CBRE began tracking rents in 1989. Rents have increased 5.6 percent each year since 2012. (Above: Los Angeles, with warehouses in the foreground.) Photo credit: Shutterstock.com.

The US industrial real estate market in 2019 will look much like it has in recent years, with record low vacancy rates, increasing rents, and a steady supply of new warehouse and distribution space, but not enough to meet growing demand.

“Nothing has changed. It’s a good time to be an owner or developer of industrial real estate,” said David Egan, head of Americas and global industrial and logistics research for real estate developer CBRE.

With trucking, rail, and labor costs increasing faster than rental rates, managing transportation costs is now the main driver in choosing the right location for warehouse and distribution space, industrial real estate experts say. For every dollar spent on rent, cargo interests pay 10 times that for transportation and seven times that on labor, according to Chris Caton, senior vice president and head of global research at Prologis. For importers, exporters, and especially e-commerce fulfillment providers, managing transportation costs by choosing the right location for logistics space is critical, he said.

CBRE’s third-quarter 2018 industrial and logistics indicators were overperforming nationwide, in most markets, both primary and secondary. The overall availability rate declined 10 basis points to 7.1 percent, the lowest level since the fourth quarter of 2000. This marked the 34th consecutive quarter of positive net absorption, the longest streak since 2001. The national vacancy rate edged down to 4.3 percent, the lowest level since at least 2002. Vacancy rates in key transportation hubs and seaport cities were even lower.

Net asking rents nationwide increased 1.7 percent, to $7.21 per square foot, the highest level since CBRE began tracking rents in 1989. Rents have increased 5.6 percent each year since 2012.

Despite these robust conditions, industrial real estate doesn’t appear to be headed for a bubble because demand remains stronger than supply. Rent increases, though somewhat troublesome, haven’t been so great that users of industrial space walk away from the deals.

“If paying a premium for the right location works for your network, that’s the way to go,” Egan said.

Because managing transportation costs is paramount, the good news for shippers and logistics providers is that improvements in technology, alternative fuels, and automation should flatten out transportation costs in the next five to 10 years, Caton said. The Prologis report, Innovation, Disruption and the Value of Time: The Next 10 Years in Logistics Real Estate, states that each 1 percent savings in transportation and labor costs equates to 15 to 20 percent of logistics real estate rent.

Electric-powered vehicles for short-haul last-mile/last-touch deliveries, solar power in warehouses, and robotics and automation in cargo-handling already are changing the economics of logistics real estate, the report stated. Those improvements, coupled with information technology and predictive analytics to reduce inventory and cargo-handling costs, will make higher-rent locations in the urban core areas more desirable than lower-rent options in more distant ex-urban locations.

When speed of delivery to consumers and lower transportation costs are important, third-party logistics and e-commerce fulfillment providers are choosing in-fill locations in higher-cost cities in Los Angeles County over the Inland Empire, New York and northern New Jersey versus the Lehigh Valley, and Oakland or San Francisco over California’s Central Valley, Caton said.

Building sizes range greatly from fewer than 100,000 square feet to more than 500,000 square feet where such properties are available, as long as the logistics facilities allow users to handle high volumes of shipments and provide convenient access to transportation infrastructure, Caton said.

The CBRE third-quarter report cited secondary markets such as Pittsburgh; El Paso, Texas; Phoenix; Sacramento, California; and Albuquerque, New Mexico, as experiencing some of the largest decreases in availability rates. That makes sense in an era of e-commerce and omnichannel logistics, Egan said. “There are people who live in those cities, so it is important to be close to those markets,” he said. The barriers to entry in secondary markets also tend to be lower than in the large urban hubs.

The US-China trade war that started in 2018 exposed the tightness of the warehouse and distribution markets in the larger seaport and inland hubs. Retailers front-loaded holiday season merchandise, followed immediately by spring 2019 merchandise, to beat the implementation dates of a series of Trump administration tariffs and threatened tariffs. As a result, the warehouses were still holding some Christmas products when spring shipments began to arrive.

With available space at historical lows, what in normal times would have been considered slack or buffer space was used up, Egan said. Although the trade situation likely will work itself out this year, the industry must get a better grip on how much slack space is truly available in the event of future surges, he said.

Looking ahead to the coming year, “There is new construction, but not a lot of it,” he said.

Although import volumes are generally expected to soften in the first quarter, given the amount of front-loading that occurred in the fourth quarter, last year’s trade disruptions won’t impact the course that industrial and logistics space has been on in recent years. “The leases we deal with are five years or longer,” Egan said. “Certain port areas may be exposed in the short term, but the broader market will not be affected.”