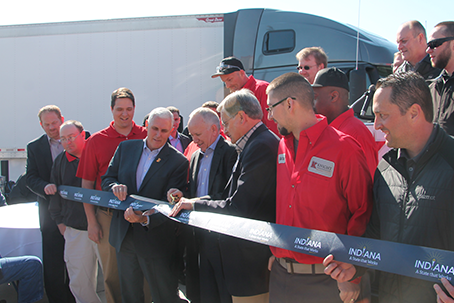 Mention Indianapolis and its famous speedway comes to mind, but so should supply chain velocity, warehousing and freight.

The boom in industrial development fueling construction of U.S. warehouses and distribution centers reverberates in Indianapolis, which claims to be the “crossroads of America.” The claim isn’t an idle one: four Interstate highways converge on and encircle Indiana’s capital city.

In 2015, Indianapolis was one of the most active markets for portfolio-scale logistics investment involving multiple properties, according to industrial real estate firm Jones Lang LaSalle.

Indianapolis is home to Celadon Trucking, founded by the late Steve Russell in 1985 and now the 12th-largest U.S. truckload carrier. Other trucking companies are drawn to the city for the same reason: it's where the freight is.

Old Dominion Freight Line, the fourth-largest U.S. less-than-truckload carrier opened a 63-door terminal in Brownsburg, Indiana, May 17, bringing its total number of terminal doors in the Indianapolis area to 380.

The Brownsburg terminal is the second new facility for ODFL, a nearly $3 billion trucking company, this year. The carrier has four other terminals in the Indianapolis market.

The $1.2 billion company doubled the size of its office, built a 20,000-square-foot truck maintenance shop, along with a truck wash and fueling station, and installed LED lights.

“We needed a location that could support our growth,” Dave Jackson, president and chief executive officer, said in a statement. “Plainfield’s warehousing and logistics sector is quickly becoming the place to be in the Indianapolis metro area for both our customers and transportation providers.”

A major goal is completing the extension of I-69 from Scotland, Indiana, to Indianapolis, along with the construction of additional Interstate lanes to smooth the flow of truck traffic.