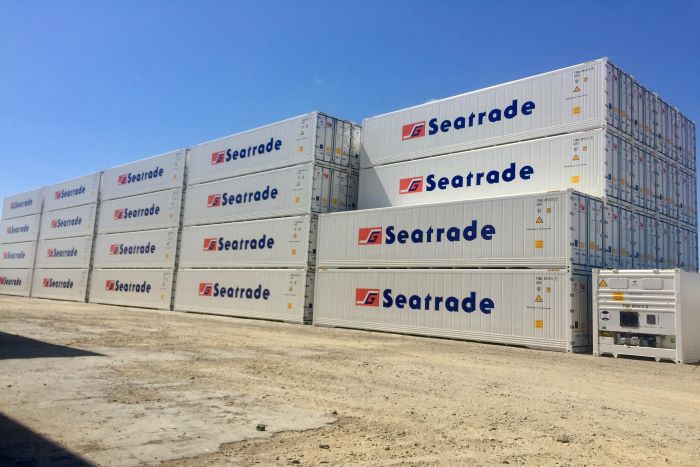 Even as consumer demand for healthy foods such as fresh fruits and vegetables continues to grow, the long-term prospects for conventional reefer ships remain unclear. Photo credit: Seatrade Group.

Seasoned veterans in the perishables industry are accustomed to adapting to changing marketplace conditions. Recessions, droughts, pest infestations, livestock disease, labor strikes — they’ve seen it all. However, the coronavirus disease 2019 (COVID-19) stands apart both for the severe disruption it’s causing across global economies, transportation networks, and the workforce, and for the particularly harsh impact it’s had on food growers, processors, retailers, and consumers.

The turmoil unleashed by the COVID-19 pandemic has barely subsided, evidenced by numerous reports of service failures that continue to come in from stakeholders throughout the food supply chain.

While the dramatic refrigerated (reefer) equipment imbalances that spiked in March and April are easing slightly, plenty of unresolved transport issues remain, said Howard Posner, president and managing director of NAGA Logistics, a non-vessel operating common carrier (NVO) and freight forwarder, as well as US general agents for the Seatrade Group.

Finding solutions to those problems and getting timely information is harder than ever with so many staffers working from home.

Posner cited recent shipments destined for India as an example. The Ministry of Shipping ordered shipping lines to suspend detention and demurrage at Indian ports from March 22 to April 14, while customers’ shipments were already on the water. The ocean carrier representative assured NAGA Logistics that its customers’ shipments would not incur detention and demurrage charges, even though the 45-day transit time meant the shipment would arrive after the end of the grace period.

But the customers ended up getting charged, and attempts to reach someone at the organization who could reverse the charges were unsuccessful, said Posner. The response from the carrier was, “We can’t get a reply from management; they are all working from home,” he said.

For NAGA Logistics, the inability to reach appropriate staff at the ocean carriers is ongoing, “even when we’re trying to get rates, or trying to get confirmation on equipment,” Posner told JOC.com, and that’s on top of existing complications with “skipped schedules or entire services being pulled.”

“It’s frustrating to read announcements from carrier executives who say they’re returning to ‘business as usual’ and ‘we’re working through this,’” Posner said. While the largest beneficial cargo owners (BCOs) may have “a bit more leverage” with the lines, he noted, that’s not the reality for everyone.

While container lines continue to see large downfalls in demand resulting from the pandemic, traditional reefer ships are seeing an uptick in business.

NAGA Logistics worked with partner GreenSea Chartering to charter a reefer ship from Southern California’s Port Hueneme to Japan in mid-March for a major California citrus exporter, something that hadn’t happened since the labor slowdown at US West Coast ports during 2014-15, “when a couple of reefer ships were chartered in for Korea and Japan,” said Posner.

“Concerns about the inability to get sufficient reefer equipment or confirmation on schedules, combined with rising carrier surcharges and a need to move product, resulted in the ability to put a deal together for them and get fresh fruit into the market quickly,” he said.

South Africa’s citrus shippers are continuing to utilize reefer ships in their citrus program to the US.

“At the end of the day, they feel more comfortable knowing they have more control, since they can dictate loading and discharge schedules,” said Posner.

Fresh citrus products are in exceptionally high demand, with consumers concerned about their health looking to increase their Vitamin C intake to boost their immune systems. But even as consumer demand for healthy foods such as fresh fruits and vegetables continues to grow, the long-term prospects for conventional reefer ships remain unclear.

“Reefer vessel operators have cautiously invested in newbuilding over the past decade, while the container industry has continued to grow exponentially,” Posner said. “Baltic Reefers added a handful of newbuildings in the past few years, Seatrade went through their heavy reefer container intake Colour-Class vessel build-up over the last five years, and daughter company GreenSea added a number of highly specialized newbuildings. But I don’t believe the conventional reefer market will see a newbuilding spike in the coming years.”

One reason is that “fuel prices will eventually come back and bite everyone,” he said. “We’re already seeing a rise in fuel prices in recent weeks. And IMO 2020 rules will have a greater impact as well.”

Conventional reefer vessels cannot compete against container lines when it comes to fuel costs. A larger reefer ship typically holds about 6,000 pallets of refrigerated cargo, the equivalent of about 300 FEU, just a small portion of the total capacity of today’s Panamax or larger container ships.

“The conventional fleet will continue to handle a segment of the reefer market, particularly for seasonal trades and on-niche trades where they’re required to move product quickly to and from certain markets or in specialized trades, such as the off-shore fishery operations,” said Posner.

As for the container industry, the impact of COVID-19 has severely affected demand, resulting in reduced volumes and skipped sailings. Some flag-state carriers are getting government support now, “but it’s uncertain how long that will continue or how long that will allow struggling lines to stay fluid,” said Posner.

That could prompt another round of mergers and acquisitions among the major carriers and further investment in reefer containers by smaller lines, he said.

“It appears inevitable that the container industry will undergo further consolidation,” he added. “The multinational and regional players also realize they need to continue to make more investments in reefer equipment, as the growth in reefer trade will continue post-pandemic. Reefer containers have gotten more sophisticated over the years, which allows carriers to better service cold treatment and controlled atmosphere trades, where there is potential for even more growth.”

Indeed, investments in the reefer market and overall cold chain will not be permanently curtailed by COVID-19, said Posner. While Europe’s cold storage facilities are operating at full capacity due the effective shutdown of the foodservice market, there is continued investment in cold storage and consolidation among large global players.

Meanwhile, rising demand from overseas markets, China in particular, continues to bode well for food producers and their logistics partners.

“China remains a huge consumer market that US producers need. There are a limited number of alternative buyers who can take that volume of foodstuffs — not just reefer products, but dry products like grains,” said Posner.

While the pandemic may slow its growth, India is another bright spot with an expanding consumer market and growing middle class, while countries in Africa will also be an important consumer market for decades to come as their populations also continue to grow.

Similar to other reefer BCOs, Pascal Jaouen, managing director of French Produce Trading, a leading exporter of traditional French shallots to the US, Asia, and other foreign markets, said he has also encountered considerable problems getting reefer containers because they are being held up, mostly in China. Rates are also skyrocketing, he says.

“We’re seeing rates to Asia go up like crazy; anywhere from 40 to 60 percent, especially for shipments from France to Singapore,” Jaouen told JOC.com.

At the same time, one of French Produce Trading’s top buyers has stopped ordering entirely because their foodservice business has been essentially shut down. Fortunately, the firm’s grocery chain business in the US and France has held steady.

Likewise, the domestic grocery business in France has buoyed business and offset reduced exports for Blue Whale, France’s largest apple exporter, said Gerard Tessier, export manager. Over the past five years, French exports of fresh fruit and vegetables to the US have grown by an average of 19 percent in volume and 18 percent in value, according to INTERFEL, the French association representing fruit and vegetable growers, importers/exporters, and distributors. The US remains an important market for French produce despite the pandemic, and INTERFEL and the European Union have co-financed a program to promote fresh fruits and vegetables exports from France.

More French consumers are buying food produced in France, according to Tessier, a trend he expects will remain unchanged for the foreseeable future, unlike demand patterns in other markets that have been upended by the COVID-19 crisis.

“Up until the end of February, we were doing significant export business to Asia, South America, and the Middle East,” he said. But once the pandemic went global, it was nearly impossible to get reefer containers when and where they were needed, said Tessier, who estimates Blue Whale’s exports are down by about half of the typical tonnage.

Meanwhile, COVID-19 is causing other difficulties, with some customers not paying their invoices and others likely to go bankrupt in the next year or so, according to Tessier.

And with consumers worried about buying bulk fruit that was likely touched by many people, the split between bulk and pre-packed fruit has shifted from about 80 percent bulk and 20 percent pre-packed to closed to 50-50. The change in consumer preference has “cost us a fortune,” Tessier said.