High US inventories could be the new normal

High US inventories could be the new normal 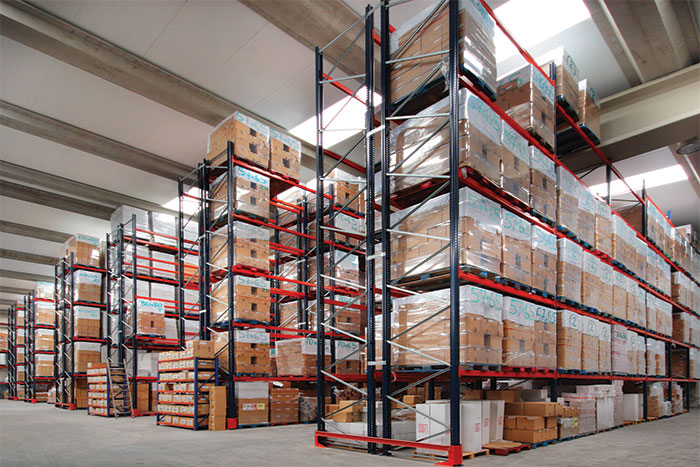 A drawdown in inventories may be underway, but it is still too early to tell.

The state of U.S. freight growth in 2016 and perhaps next year hangs on inventories that have been piling up for years at retailers, wholesalers and manufacturers and have proved difficult to draw down. Bloated inventories have depressed freight demand since 2014, contributing to overcapacity in trucking, and filled every nook and cranny of available warehouse space, leading to low vacancy rates and higher warehousing costs.

Although signs point to a long-rumored destocking finally beginning, at least in some industries, larger inventories may be the new norm until shippers in general improve their ability to forecast sales and track goods as they move through the supply chain.

“I think maybe that inventory is going to settle at a level that is higher than the trough we saw a few years ago,” said Larry Gross, a senior transportation analyst at Indianapolis-based FTR and president of Gross Transportation Consulting. “Inventory levels have been moving up for quite some time, and they have remained stubbornly high. There is a real question of how much of that is structural and how much of it is cyclical overshoot.”

That new norm means shippers soon could face higher costs not from transportation providers but from inventory, which for most of this decade has been comparatively cheap. Low post-recession inventory costs helped shippers compensate for increases in shipping rates, especially in the truckload market, where contract and spot rates spiked in 2014. Rising warehouse rates mean shippers also will be paying more to store goods.

The West Coast longshore labor dispute, which disrupted supply chains in late 2014 and early 2015, often gets the blame for the inventory buildup, and there’s no doubt it played a role. Inventory-to-sales ratios leaped during the crisis, from 1.42 in November 2014 to 1.46 the following February. But rather than dropping back to mid-2014 levels, inventories climbed further, with inventory-to-sales ratios hitting seven-year highs. That points to other factors contributing to the long-term buildup of inventories.

One of those factors is the new global container weighing rule. The International Maritime Organization’s Safety of Life at Sea mandate, which takes effect on July 1, obliges ocean carriers to only load containers that have a verified gross mass declaration.

“Last year, our inventory group arranged to buy an additional two weeks of safety stock until the port labor issues ended. Once those issues were resolved, the uncertainty of SOLAS had come down the pike, so it seemed prudent to continue to keep some safety stock on hand until we determined whether our vendors would run into any problems complying with this new requirement,” a major U.S. retail importer said.

E-commerce is muddying the picture, changing the amount of inventory that retailers need to keep on hand to fulfill increasing online consumer demand. Fear of running out of product during peak sales periods — a major issue in 2014, according to a GT Nexus survey — also has helped maintain higher stock levels in 2015 and 2016, despite slower-than-anticipated sales.

An even bigger factor, perhaps, is difficulty in forecasting demand as retailers come to grips with consumers’ new shopping traits. “More than e-commerce, the inventory buildup has to do with how well retailers understand the health of the economy and consumer interest in certain products,” said Satish Jindel, president of Pittsburgh-based SJ Consulting Group. “People are still spending money, but not on the same things they did 10 years ago.”

Consumers are not only buying products online, but they’re also purchasing entertainment, whether by downloading music or streaming video. “Where is that money coming from? It’s discretionary money they used to spend on something else,” something purchased in a store, Jindel said. “Retailers need to understand those behaviors. Then they won’t have overstocked inventory. And if they have overstocked inventory at the store, then they need to think about how they fulfill online sales and start delivering from the store to get a lower shipping cost.”

Others are more confident that inventories will shrink, especially as new technology becomes available and shippers shift their inventory strategies. “From 2009 through 2014, inventories represented 13.6 percent of GDP, and then rose to 14.5 percent in 2014,” said Sean Monahan, a partner at A.T. Kearney. Last year, that number dropped to 14 percent of GDP, he said. “We foresee inventory levels continuing to slide back to that more efficient operating level.”

U.S. business inventories rose 5.4 percent a year from 2010 to 2014, and then flattened with 0.25 percent growth last year, Monahan noted during the June 21 launch of the 2016 Council of Supply Chain Management Professionals State of Logistics Report, prepared by A.T. Kearney.

But inventory carrying costs shot up 5.1 percent last year, compared with a five-year compound average growth rate of 2.6 percent. Financial costs associated with maintaining capital jumped 7.4 percent, much higher than the five-year CAGR of 0.9 percent, according to the CSCMP report. Other inventory costs, including those related to obsolescence, rose 5.1 percent.

With the U.S. Federal Reserve considering an increase in its benchmark federal funds rate, following the first increase since the recession last December, inventory carrying costs are poised to rise, even as transportation costs, driven down by overcapacity and lower fuel costs, hit new lows.

That will pressure shippers and their logistics partners to cut excess stocks or look for new ways to share inventory costs with other supply chain partners. An example might be the agreement between J.C. Penney and Ashley Furniture. Although J.C. Penney will sell Ashley Furniture products, it will rely on the manufacturer to carry the inventory and ship directly to J.C. Penney customers. That makes J.C. Penney stores the equivalent of an online marketplace.

“Ashley’s logistics infrastructure is highly efficient with five warehouses nationally and the largest suite of products in the industry, allowing shorter customer lead times and flexibility on inventory ownership,” J.C. Penney CEO Marvin R. Ellison said during the company’s first-quarter earnings call. “Product will be directly shipped to our customers and J.C. Penney will own the floor samples, but will carry no additional inventory.” That model mirrors how J.C. Penney plans to expand appliance sales, a major part of its strategy to pull in new consumers.

Are inventories actually being drawn down?

Some recent economic indicators say so. Freight shipment volumes, while weak compared with prior years, have been rising since February, the Cass Freight Index shows. Truck tonnage increased 2.7 percent in May from April, after dropping 1.7 percent in that month, and was up 5.7 percent year-over-year, according to the American Trucking Associations For-Hire Truck Tonnage Index.

“We recently received good news on the inventory cycle, with the total business inventory-to-sales ratio declining for the first time in nearly a year,” ATA Chief Economist Bob Costello said. “While one month doesn’t make a trend, this was good news” for trucking. Motor carriers blamed last year’s revenue declines in part on high inventories that lengthened replenishment cycles. Revenue fell at 26 of the 50 largest U.S. trucking companies in 2015.

Still, those ratios remain higher than a year ago. The retail inventory ratio in April 2015 was 1.46. In April 2014, it was 1.42. The ratio has been 1.50 or higher for three months this year. The last time that happened was in 2009, as unsold goods piled up during the recession.

Stronger consumer spending in April — up 1 percent that month after climbing just 0.1 percent in March, according to the U.S. Bureau of Economic Analysis — may have pulled the retail inventory ratio down. Sustained consumer spending would help bring inventories down to what Monahan and others call a more manageable level.

Even if consumers open their wallets wider, however, it’s unclear how low inventories can go. Despite widespread improvements in technology, greater reliance on third-party logistics providers and so-called fourth-party supply chain control towers, too many shippers have limited visibility into their supply chains, so aren’t able to accurately predict shipment arrival times.

“The vast majority of shippers do not even have a TMS (transportation management system),” said Michael P. Kukiela, vice president of supply chain management at Schneider Logistics. “Visibility is completely dependent on whether you have or don’t have a TMS.” Many U.S. shippers, especially midsize and smaller companies “don’t have a good understanding of how much volume they’re moving unless they go back and audit freight bills.”

The result? Bloated inventories, said Jett McCandless, CEO and founder of project44, a Chicago-based middleware technology company that offers application programming interfaces, or APIs. “Vendors are trying to get product from the port faster, but the communications layer is broken. They’re using a lot of work-arounds,” such as stockpiling goods in additional distribution centers or warehouses close to stores and shuttling them as needed.

“They’re doing that because they can’t guarantee they’ll meet a must-arrive-by deadline,” he said. “We’re working with one large U.S. retailer that has a 30 percent black hole on inbound tracking.”

The good news is that shippers are increasingly focused on bridging the gaps into which data on inbound shipments, domestic and international, often disappear. Among shippers “there’s a noticeable shift toward wanting to control inventory costs and very clearly viewing anything in the pipeline as inventory, even things still on the manufacturing floor or raw materials,” said Greg Smith, an enterprise consultant at IT services provider Tech Mahindra. “It’s the end-to-end inventory view. Lots of people talk about that, but very few people have it. Integration of all the technology you need for that is still the hard part.”

Too many supply chains and companies are still organized in silos, according to Smith, McCandless and other technology executives. “In all the previous generations of IT, integration was hard, so each of the systems were developed in a silo,” Smith said. “The result is all these islands of information.”

Those islands or silos obscure supply chain visibility, which in turn slows freight velocity, leading to the addition of excess inventory to avoid retail stock-outs and stalled production lines. “Without accurate information on their inbound freight, they fall back on inventory bloat,” McCandless said. “We’re getting pressure from retailers to address these challenges.” He thinks a clearer end-to-end view of supply chains is 12 to 18 months away, as shippers apply new technologies and improve older supply chain processes.

Ronald Marotta, vice president of the international division at Yusen Logistics (Americas), sees progress. “We’ve definitely seen over the past year that people are starting to get much, much smarter about building efficiencies across the entire supply chain,” he said at the launch of the CSCMP/A.T. Kearney logistics report. “There’s definitely less cargo being handled in warehouses on the international side and on the truckload side.”

That’s directly related to “people trying to discount inventory, get it off the books and into their retail footprint,” Marotta said. “A year ago, you couldn’t find warehouse space. Today it’s not like that. There’s definitely a change in the economy.” Whether that’s good or bad remains to be seen.

“We are back to managing inventories more effectively,” Monahan said. “Hopefully, as organizations become less siloed and more cross-functional in decision-making, we’ll see inventories become more manageable and drop to that low-13 percent-of-GDP range again. We may become even more efficient.”

That may be a longer-term view, however. In the short term, “there’s a still incredible amount of obsolete inventory,” Kevin Smith, president and CEO of Sustainable Supply Chain Consulting and chair of the CSCMP board, said at the State of Logistics report launch. “At some point, we have to find a way to draw that down.”

The easiest way? “Everybody buys a lot more,” he said. “Even with e-commerce, people still aren’t buying enough” to take a bigger bite out of the nation’s $2.5 trillion inventory stockpile.

How to boost US container exports

US exports rebounding on weaker dollar

How to Improve OTIF: 15 Tips for On Time and In Full Delivery
END_OF_DOCUMENT_TOKEN_TO_BE_REPLACED