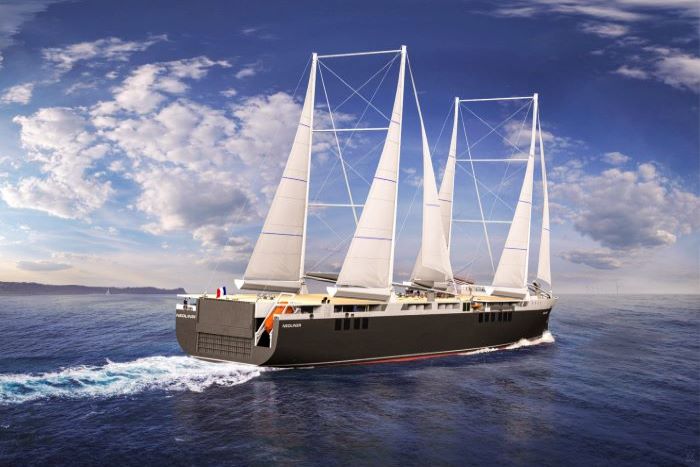 Wind power is gaining favor with multipurpose (MPV) and roll-on, roll-off (ro-ro) vessel owners as they seek to cut fuel consumption and emissions. Operators are investing in wind-assisted propulsion (WASP) systems despite crashing oil prices, which have cut bunker costs, amid the COVID-19 shutdown.

Shipowners, including Boomsma Shipping, Louis Dreyfus, and Neoline said they are moving ahead with the installation of a variety of wind-assisted systems, while Sweden-based Wallenius Marine is working on concept plans for a sail-assisted vehicle carrier that could be built in 2021.

The vessels, modeled on traditional sailing ships, will operate between Saint-Nazaire, Halifax, and Baltimore on a two-week rotation, although other US East Coast ports can be added on a tramp basis, Jean Zanuttini, Neoline director general, told JOC.com.

The ships, costing €40-€50 million ($43 million to $54 million) each, are expected to launch by the end of 2022, Zanuttini said. They will have four main sails augmented by a diesel-electric engine.

“Shipbuilding negotiations are on a good path, and we do hope that we can maintain our present course and move forward on contract signature within the next few months in spite of the current COVID-19 crisis,” he said.

French construction equipment maker Manitou is one of three “shipper partners” that have declared their intention to use the new service. Zanuttini said the other shippers who have also signed up to the service prefer to keep their involvement confidential.

The ArianeGroup, a rocket and space vehicle launch joint venture of Airbus and Safran, is planning to build the Canopée, a 121-meter (397-foot) long ro-ro ship fitted with four 98-foot sails, to transport components for the Ariane 6 rocket launcher across the Atlantic.

Marc Van Peteghem, a co-founder of naval architectural practice VPLP Design, which designed the ship, told JOC.com this week that three shipyards are short-listed, and they plan to close the contract in about six weeks. Although the pandemic could delay the submission of proposals, they are hoping to award the two-year shipbuilding contract so the vessel can be launched in 2022.

Canopée’s sails, a proprietary system called Oceanwings, have been developed by AYRO, a subsidiary of Paris-based VPLP Design, and will augment the ship’s main propulsion system, cutting fuel consumption and reducing carbon dioxide emissions by 25 percent.

Van Peteghem said the ship will be operated by French company Alizés and chartered by the ArianeGroup to transport rocket components from Europe to the Guiana Space Center in French Guiana, South America, taking other cargoes when there is no need for rocket transport.

Boomsma Shipping's investment is supported by a €5.4 million ($5.8 million) WASP project funded by an EU Regional Development Fund for the North Sea region. The program brings together equipment suppliers and ship owners to research, test, and validate wind propulsion systems.

The ventifoil units are built into a specially designed flatrack from which a folding, wing-like VentiFoil is deployed. These ridged, aspirated wings act as sails and use boundary layer effects, also important in airplane wing design, to create suction which pulls the vessel along, reducing engine load.

“We have chosen this system mainly because it can be moved and doesn’t need to be fixed or integrated with the vessel,” Johan Boomsma, co-owner of Boomsma Shipping, told JOC.com. “The units are in that way more practical, because the device can be lowered and moved using the hatch-cover crane … it is also possible to move the system to another vessel. And, most importantly, it is suitable for fitting on existing vessels.”

The ventifoils will be used aboard the Frisian Sea beginning in September, barring any virus-related delays, and evaluated for 12-15 months, Boomsma said. Each unit weighs about 8 mt and causes some loss of cargo carrying capacity, but Boomsma said this was negligible for a 6,400 dwt vessel. Boomsma Shipping carries wind farm components, project cargo, and other breakbulk freight.

Boomsma declined to say how much the system cost, but said payback would take about five years based on 2019 gasoil prices. As of April 24, however, pandemic-related demand destruction had driven marine gasoil (MGO) prices down by half, from a 2019 average of $600 per ton to about $300/mt, according to British shipbroker Clarksons.

“Once [the pandemic] is over and agreement is reached on oil output, oil prices will start to increase again,” Boomsma said. “Obviously the higher the fuel price is, the better it is for the payback time.”

The ship is one of three vessels jointly owned by Louis Dreyfus and Norwegian shipowner Leif Höegh & Co. that transport components for European aircraft manufacturer Airbus. Kite installation is planned for the fall of 2020 unless COVID-19 disrupts the schedule, Antoine Person, Louis Dreyfus general secretary, told JOC.com, adding it should generate fuel savings of about 20 percent.

Sweden’s Wallenius Marine is designing a 7,000-vehicle carrier that will be ready for construction in late 2021, with deliveries starting from 2023, the company said in a statement. The 689-foot vessel will have four 361-foot sails which are intended to generate about 90 percent of its propulsion, although it will also have auxiliary engines.

Allwright of the International Windship Association said although wind-assisted propulsion systems are on the periphery, two initiatives would propel them into mainstream ship design.

“The first would be the inclusion of wind-assisted systems in a shipyard’s equipment list. At the moment, everything is bespoke,” he said.

“The second measure would be to include wind-assisted propulsion in discussions about ways to meet the IMO’s goal to decarbonize shipping by 2050,” he added. “The focus on decarbonization is on the use of alternative fuels like ammonia for propulsion when it should be on all propulsion sources including wind, along with energy efficiency measures.”