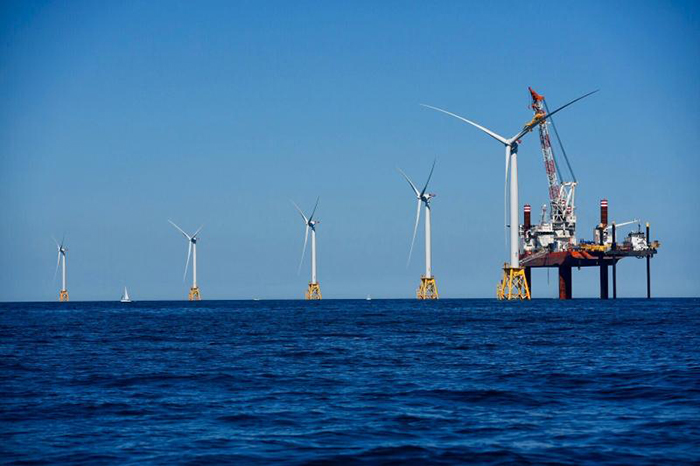 The Brave Tern completes installation of the fifth wind turbine at the Block Island Wind Farm
off the coast of Rhode Island. Photo credit: turnto10.com.

Coastal states are racing to establish offshore wind farms in the US, but the process is far more complex than building onshore, said Luke Lewandowski, director of research in the Chicago office of Wood Mackenzie, the international alternative energy consultancy. Offshore requires a lot of big equipment bolted to the seabed, deep-water ports for bringing in larger vessels, staging areas at ports for marshaling and mobilizing, construction vessels, and special vessels for laying power transmission cables.

In the US Northeast, several factors favor offshore wind development: There is a density of energy load, transmission lines are closer to load centers, and cities are more progressive and receptive to renewable wind energy. While offshore wind installation is not exactly on a fast track, Wood Mackenzie forecasts that as of the end of 2024, the US will have about 4.7 gigawatts of installed offshore capacity, or about 16 operating projects.

Stephanie McClellan, head of the Special Initiative on Offshore Wind (SIOW) in the College of Earth, Ocean, and Environment at the University of Delaware, is pressing hard for a clean energy economy. McClellan and SIOW have championed wind energy in the public and private sectors.

“Harnessing the untapped full potential of the strong, consistent winds that blow off of our nation’s coastlines could generate as much as four times the amount of electricity currently generated in America,” she said.

McClellan is also a realist. “We’re lagging in offshore wind because the cost of the technology is very, very high, but European countries were willing to accept that cost-benefit ratio early on,” she told JOC.com.

Opposition rained down on early would-be trailblazers in the eastern US, particularly from vocal “not-in-my-backyard” (NIMBY) hostility to the visual impact of offshore wind turbines. The Cape Wind project proposed for Nantucket Sound that “never got built,” she said, “left a very bad taste in people’s mouths.”

McClellan and SIOW have been on an aggressive “myth-busting” campaign and see the utility-sized Vineyard Wind project with its 84 MHI Vestas turbines — the “most advanced commercial wind turbine available,” she said — as the future of US offshore wind energy.

Being built 35 miles offshore in federal waters, Vineyard Wind has an approved environmental impact report and a welcome mat from the Massachusetts hamlets it will power.

McClellan has some other enticing stats. She forecasts that the offshore wind power energy will generate 18.6 GW of cost-effective power in seven states along the Eastern Seaboard by 2030, and is a $70 billion capital expenditure business opportunity for entrepreneurs and companies willing to dive in.

The question is: how will ports, carriers, forwarders, trucking, and project logistics businesses cash in on their share of that capital expenditure?