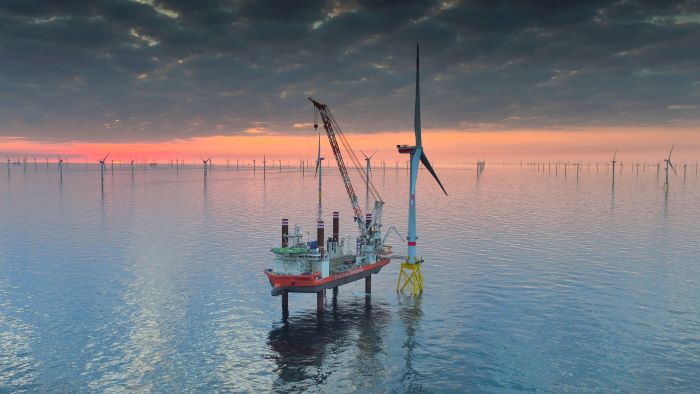 To handle a growing offshore wind market, the US will need a fleet of specialized vessels and equipment comparable to Europe’s. Photo credit: Fred Olsen.

Although discussed as a possible solution to the Jones Act quandary, industry experts disagree on whether the US Gulf-based fleet that services the offshore oil and gas industry will be able to transfer its skills to the offshore wind supply chain.

The Merchant Marine Act of 1920, commonly called the Jones Act, requires that vessels operating between US ports be built, owned, managed, and crewed by Americans. By law, offshore wind farms are treated as ports, according to a blog post by Tony Appleton, director of offshore wind for construction and engineering firm Burns & McDonnell. The Jones Act, then, throws up a barrier to the development of the offshore wind industry in the US, because there is currently no specialized American fleet available to handle offshore wind turbine installation.

Wind turbines are imported into the US from all over the globe by all manner of ocean-going project and breakbulk vessels. However, once delivered to a United States port, it becomes necessary to move the pieces for an offshore wind farm — such as blades, tower sections, and nacelles — to the deepwater site for installation. In Europe, a dedicated fleet of specialized, purpose-built vessels has been developed to serve this market, but these vessels cannot easily shift over to the US to work because they are not American-flagged. Moving cargo from an onshore port to an offshore (wind farm) port would violate the Jones Act.

Will there be US investment in the kind of offshore wind expertise and equipment that is common in Europe? “It’s a chicken and egg problem,” said Max Cohen, an associate director with IHS Markit who specializes in offshore and onshore wind in the US. IHS Markit is the parent company of JOC.com.

“Do you have any industry to build vessels for? Is it feasible? Or will people look for workarounds like barging?” Cohen said. He does not think there will be changes to the Jones Act to make it easier for non-US providers to participate.

Some major project developers have doubts about the transferability of oil and gas experience, or even onshore wind experience, to the offshore wind industry, Cohen said. Offshore is so specialized that they do not see these backgrounds as creating a competitive advantage, he said.

However, the non-profit Business Network for Offshore Wind is pushing hard to help build a US-based offshore wind supply chain. The organization considers the Gulf of Mexico oil and gas industry’s expertise in offshore work a valuable resource, according to industry publication Workboat, and is reaching out to shipbuilders, operators, and others in the current supply chain who can assist with the US’ nascent offshore wind industry. US-based training in installation, maintenance, vessel operations, management, and other aspects of the offshore wind industry is also ramping up, according to Workboat, with training centers opening in Massachusetts, New York, North Carolina, and Florida.

The first stage of offshore wind development is focused on the US Northeast coast, and it’s likely the states involved will want to keep supply chains regional to boost job creation — a key political premise underlying the growing acceptance of offshore wind, Cohen said. In its infancy, the US offshore wind industry may only be able to keep 20 percent of a project’s spend within a given state, but the goal is to bring that to 50 percent, with the remaining half spent on turbine procurement, Cohen said.

Once projects are built, Cohen notes, there will be ongoing operation and maintenance (O&M) requirements for the turbines. “Should the vessels be owned by project owners, or sub-contracted?” he said. In Europe, owners with a portfolio of multiple projects often have one O&M provider that moves from turbine to turbine to service and maintain, creating economies of scale, he said.

More wind on the way

Currently, there are only 30 megawatts (five turbines) of offshore wind energy installed in US waters, Cohen said. By 2030, IHS Markit’s wind energy outlook predicts 7 gigawatts will have been installed, and more than 20 GW by 2050. The outlook is based on concrete state policies and targets, he said.

Most of the first wave of installation will be in the Northeast, but by the 2030s there could be a few wind farms off the US West Coast. Because of the deep waters there, however, western offshore wind will have to be based on floating turbines “and that technology is not ready yet,” Cohen said. Offshore interest could also develop in the Southeast, he said, but is unlikely in the Gulf region.

In his blog post, Appleton noted that the US Senate Commerce, Science, and Transportation Committee has approved a bill asking for a report on the need for and availability of vessels capable of working on offshore wind in the US. Assuming it reveals a shortage that could hamstring an infant industry, this could create pressure for a change in the Jones Act, he said. On the other hand, a promising market could also spur US investment in wind installation ships, said Appleton.