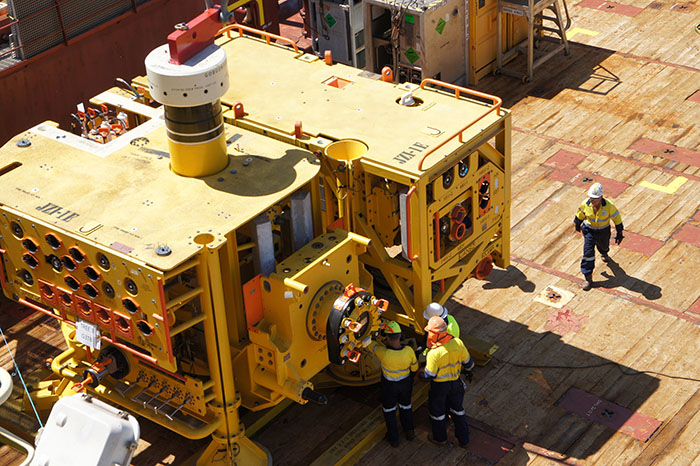 A ruling on "Christmas trees" used in deep-sea oil drilling is just one that Customs and Border Protection will revisit.

US-flag maritime advocates say a Customs and Border Protection proposal to apply the Jones Act to movements of equipment to offshore oil and gas operations would strengthen the law’s US-flag requirements.

CBP is seeking public comment until Feb. 17 on a proposal to revise the agency’s position that “vessel equipment” carried between two domestic points is not considered “merchandise” that the act requires to be carried on US-flag vessels.

The CBP proposal primarily affects the offshore oil and gas industry, but also has implications for other domestic shipping. For years, US-flag supporters have joined to oppose any efforts to loosen requirements that US domestic shipments be moved in US-flag vessels, owned, made, and operated by US citizens.

CBP’s rulings on “vessel equipment” included a controversial ruling in 2009 that a subsea assembly known in the oil industry as a “Christmas tree” was vessel equipment when transported by a construction vessel specializing in equipment installation.

“My hope is that this decision is the start of an even stronger transition in favor of the Jones act across the entire federal government, and I commend CBP for its leadership in taking this action,” Hunter said.

Aaron Smith, president of the Offshore Marine Service Association, said there is no shortage of US capacity that requires companies to seek non-US contractors. “The offshore service industry is ready, willing, and capable of completing this work, having recently invested $2 billion in US shipyards on vessels tailored to safely competing this work,” Smith said.

Matthew Paxton, president of the Shipbuilders Council of America, praised CBP’s proposed change. “This correction of past misinterpretations of the Jones Act will enable our shipyards to continue to supply, build, maintain and repair the essential vessels needed by the oil and gas industry.”

Tom Allegretti, chairman of the American Maritime Partnership and president and CEO of the American Waterways Operators, praised Customs efforts “to rightfully restore over 3,200 American jobs to the American economy and close loopholes that gave preference to foreign workers and foreign shipbuilding.”