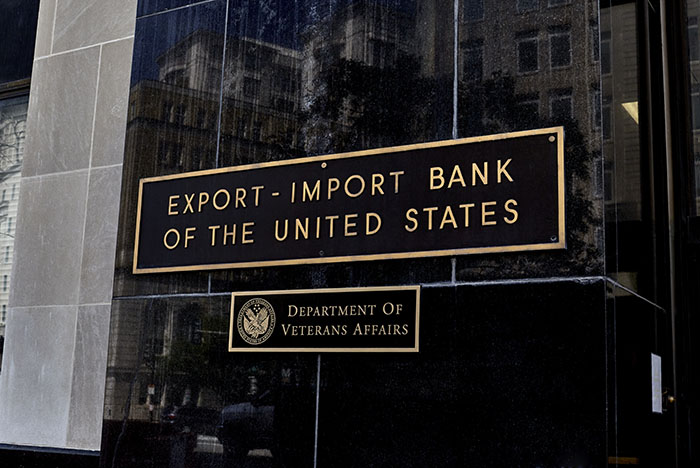 The Export-Import Bank of the United States (EXIM) was without a full quorum — and unable to approve financing of more than $10 million — for nearly four years. Photo credit: Pamela Au/Shutterstock.com.

After four years of dormancy, the Export-Import Bank of the United States (EXIM) has finally begun to resuscitate its mission to finance US exporters. In its first major decision since its board was restored earlier this year, EXIM recently approved a $5 billion loan to finance US exports for the construction and development of an onshore integrated liquefied natural gas (LNG) project located on the Afungi Peninsula of northern Mozambique.

John Masterson, senior director of treasury operations at multinational engineering, procurement, and construction (EPC) firm McDermott International, likened the bank’s activities to a “home field advantage” in sports. “And that’s something we haven’t had in a while,” he said during an Oct. 9 panel discussion at the Breakbulk Americas conference in Houston.

EXIM was without a full quorum from July 2015 until the confirmation of three board members in May 2019, leaving it unable to approve financing of more than $10 million. This long slump sent ripples throughout US project cargo supply chains, which had previously utilized direct loans from the bank to move multibillion-dollar global industrial projects forward.

“We’ve had to live without it,” Steve Drugan, senior vice president of project forwarder deugro, told JOC.com, adding that the lack of a functioning EXIM lead to many lost business opportunities.

“A lot of our [US] vendors and suppliers and people we work with, we’ve developed relationships with over decades. They’ve been dependable, repeatable, and we’ve been able to count on them,” Masterson said. But the bank’s sustained inability to finance large international projects “forced [McDermott] to go out and find new relationships in other parts of the world, just so we can qualify for a bid,” he said. When an EPC’s clients cannot get US EXIM financing and instead rely on export credit agencies from other countries, that means service providers from those other countries will be preferred.

“All of the export credit agencies around the world have their own public policies they’re trying to advance,” said Will Terrill, president and CEO of US Ocean LLC, which maintains the largest fleet of US-flagged multipurpose vessels. “The mandate of the US EXIM Bank is to provide support for US jobs and US exports.”

The bank fulfills that mandate by attaching requirements to its financing agreements, including limitations on the level of foreign content that may be included in an EXIM financing package. In practice, this requirement means that, generally speaking, when an EPC secures EXIM financing for an industrial project, they must rely on US supply chains.

EXIM financing also requires following the “preference cargo” rule, also referred to as “government-impelled cargo,” which requires that 100 percent of cargo that is covered by EXIM financing and transported by ship be carried on US-flagged vessels, unless the exporter can show that no such suitable vessels are available.

Not all clear sailing ahead

Despite the restoration of EXIM’s full board, a new risk could hamper the bank’s forward momentum: reauthorization. EXIM came up for reauthorization on Sept. 30, but as one piece in a larger appropriations puzzle. At the eleventh hour, Congress voted to extend the deadline to Nov. 21, the end of its fiscal year.

Even so, project logistics executives were optimistic about the bank’s eventual reauthorization. “The general feeling is that this has full bipartisan support,” said Marco Poisler, chief operating officer of logistics provider UTC Overseas and chairman of the Exporters Competitive Maritime Council. However, he said, there is a vocal minority that oppose it.

“We are in a period right now in which we are hoping that Congress will ultimately come together to pass an omnibus spending bill. If they do that — and when they do that — it is very likely that EXIM’s reauthorization will be part of that,” Stephen M. Renna, chief banking officer of the US EXIM Bank, said during the panel. “We don’t know at this point exactly what the terms of reauthorization will look like.”

Renna said there have been proposals to authorize the bank’s charter for 10 or 12 years, rather than the current five-year authorization, which would enable it to avoid such frequent political battles.

Also up for discussion is what Renna called a “quorum fix.”

“If the quorum of the board expires because their appointment period expired, and there are not new board members that have yet been nominated and confirmed by the Senate, there are ex-officio members who could step in and serve that role,” he said.

“EXIM should be supported because of the national and economic security it brings to the nation,” said Terrill. “Those in Congress who advocate that government should not be involved with financing like EXIM provides should give serious consideration to national and economic security benefits arising from a fully functioning and operational EXIM Bank.”

Supporters of the bank also point out that it’s a tool for expanding US influence around the world. When foreign export credit agencies rushed into the lending void left by EXIM in 2015, observers in the US watched as other countries grew their own global presence.

“Every country is in that race for global leadership in exports,” said Masterson. “In 2019, every country is stepping on the gas pedal as fast as possible to promote growth in their own economies. So, while the other export credit agencies were sympathetic to EXIM’s plight, they were very willing to try to soak up the additional capacity, which means simply displacing supply chain that would normally come from the US to somewhere else in the world.”

“It became very clear that the Chinese government was supporting Africa,” said UTC’s Poisler. “It wasn’t the only factor in getting the bank back up and running, but it was a factor.”

Kimberly A. Reed, the recently confirmed president and chairman of the US EXIM Bank, drove home the importance of the bank’s role in helping US exporters compete in new markets during an executive keynote at the port of Houston early in October. “Private financing was not available for [the Mozambique] project given its size, complexity, and risk,” she said. “We have been told that China and Russia were slated to finance this deal before our EXIM board quorum was restored by the US Senate.”

The Mozambique project will develop the Rovuma Basin, one of the most extensive untapped natural gas reserves in the world. EXIM financing supports exports to the Area 1 concession of the project, which covers approximately 10,000 square kilometers and is anticipated to supply up to 64 trillion cubic feet of gas.

The borrower is Mozambique LNG1 Financing Co. Ltd., owned by a group that previously included Anadarko Petroleum Co. Earlier this year, Anadarko was acquired by Occidental Petroleum Corp. for $55 billion in cash and stock. Occidental is expected to sell its acquired African assets to French multinational Total S.A., according to statements from the company.

The majority of the LNG to be produced by the Mozambique facility will meet Asian demand. However, the project will be transformative for the people of Mozambique, Reed said. “The project is obligated to provide domestic gas, which will support the expansion of electric generation capacity and the development of other industries in the country,” she said.