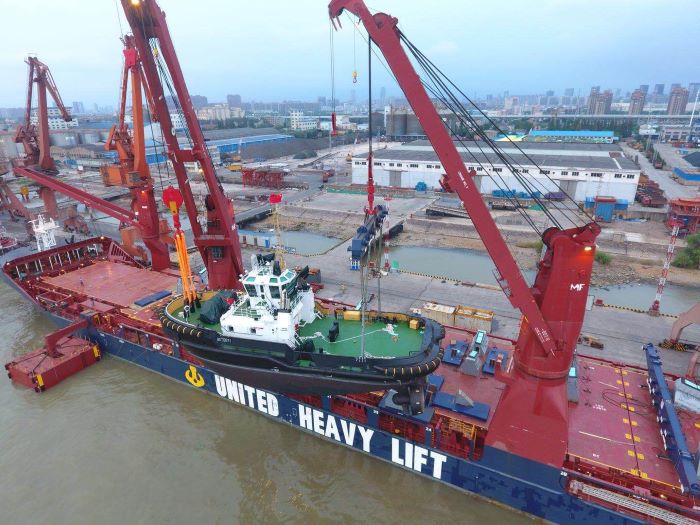 A workboat is lifted aboard a UHL ship in Nantong Harbor, China. Photo credit: UHL.

European multipurpose and heavylift (MPV/HL) carriers Ocean7 Projects and United Heavy Lift (UHL) are opening a joint office in Bergen, Norway, the companies said Wednesday, and will be teaming up to strengthen their competitive positions in an improving project and heavy-lift market.

“We complement each other well,” Ocean7 CEO Stefan Petersen told JOC.com. The UHL fleet has more lift capacity, while Ocean7’s contains more vessels, he said. “We have the same market and clients, but we are a bit wider now.”

Combined, they will be able to go after big contracts and compete with their largest rivals, Zeamarine and BBC Chartering, for oil and gas, wind, and other heavy lifts, Petersen said.

“Over the last two or three years, there has been a decrease in players in the market,” Petersen said. The number of MPV/HL competitors is at a historic low, as shipowners and banks have consolidated ships into larger fleets.

Petersen believes the supply of owners and operators can’t shrink much further. Meanwhile, “transport buyers are interested in having some choices, some competition, in the market,” he said.

Ocean7 is now booking forward contracts, as are their competitors, after a long stretch of shippers booking spot cargoes, Petersen said. A shift from spot to forward booking implies growing demand, a tighter supply of ships, and an ability to raise freight rates. This is a welcome change for the MPV/HL market, and he expects demand to strengthen.

From the client’s perspective, it becomes more important to secure tonnage and plan ahead, Petersen said. “Transport buyers are interested in getting tonnage for the future and high-level service from the operational point of view,” he said, as engineering for heavy lifts becomes more complex.

“The market has been weak [for many years], with ships earning barely enough, or even not enough, to cover costs. We’ve seen economic disasters with shipowners around the world,” he said. “But I see that we are ending this slide now. Hopefully, [the market] will turn from 2020.”

Petersen said Ocean7 has been concentrating on East and West Africa and the Far East, with a focus on oil and gas, as that’s where he’s seeing a lot of movement.

Earlier this year, UHL added Lars Bonnesen and Christian Monsted to its executive roster. Both men were most recently with Intermarine, before it was taken over by Zeamarine, and previously with Danish carrier Scan-Trans. Bonnesen is serving as UHL’s managing director and Monsted as general manager. Lars Rolner, former UHL managing director, is now CEO of the carrier’s holding company, United Shipping Group.

“I am happy to be having this opportunity to work together with Ocean7,” Rolner said in a statement. “We have had conversations about cooperating a few years ago and now finally we see it happen.”