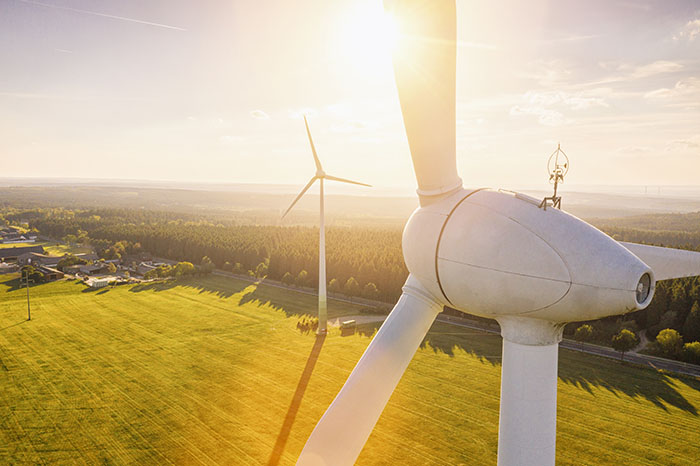 Consulting firm Wood Mackenzie estimates onshore wind energy projects totaling 22.1 gigawatts of power will be installed in the US over the next two years. Photo credit: Shutterstock.com.

As the federal production tax credit (PTC) phases out into 2023, the United States wind industry is in a “mad scramble” to complete contracts totaling an estimated 14.1 gigawatts (GW) next year, according to the energy consulting firm Wood Mackenzie.

That figure would shatter the longstanding record of 12.9 GW installed onshore in a single year set in 2012 and could put considerable strain on project supply chains, Aaron Barr, a principal consultant at Wood Mackenzie said at the Breakbulk Americas conference in Houston.

Barr predicted wind turbine installations will remain strong in 2021 — with a forecasted 12 GW of installations — before falling to 7 GW in 2022, as Washington completely withdraws existing financial incentives for the alternative energy source by the end of the year.

“The rolling off of the PTC is creating a big rush this year that will produce a contracted project pipeline of 20 GW between 2020 and 2021,” assuming there is no extension of the production tax credit or carbon tax credit until 2028, he said.

Barr said installed wind power continues to grow — even as the PTC shrinks — because “turbines and nacelles are getting bigger, heavier, and more powerful; blades are getting longer; and existing turbines are being repowered and put back into service” in parts of the US where they may have been shut down.

The growth in installation size is also having a trickle-down effect on project logistics. “Installations today involve more shipments for every project than in 2012 and more [transport] equipment capable of moving these heavyweight cargoes,” said Barr. This puts additional “constraints” on logistics providers, including railroads, heavy-haul motor carriers, transportation networks, and road and highway infrastructure, he added.

“This also means you can expect significant experienced driver shortage and significant shortage of specialized trailers capable of moving the new, longer, 55-meter [wind] blades and slower equipment turns in 2020 and 2021,” the consultant warned. All these factors will conspire to delay commercial operation dates a year or more at a time when wind turbine developers, investors, and operators are racing to beat the deadline to secure the last remaining tax credits.

At the same time, the modular manufacturing and transporting of wind turbine components used in Europe has not been employed in the US wind market, Barr said.

Acknowledging a limited supply of railcars, many of which are either aging out or commandeered by oil and gas pipeline shippers, McComas said, “There has been attrition, but we’ve gone through extensive [railcar] reconditioning, purchasing, and replacement programs, and are deploying flat cars and box cars to meet project cargo demands.”

He said BNSF is analyzing its railcar inventory to “find any excess capacity so we can take advantage of the opportunities and demand” in the wind energy sector going forward.

With developers pulling out all the stops to bring projects online, permitting for the transportation of outsized loads continues to be a drag on deadlines, said Steven Todd, vice president of Specialized Carriers & Rigging Association, the leading trade group for the nation’s heavy haulers.

“I’m not going to win any popularity contests in this crowd, but from a carrier’s standpoint, most in this room will agree there is a lot of money to be made in the next year and a half with planning and smarts,” he said. “But there are two things that can derail that in our opinion as carriers: ignorance and greed.” Todd cited a recent study from the American Transportation and Research Institute that found “as many states will attest, the basis for state regulations for governing permitting are extremely dated and not based on any empirical data or evidence.”

Although some states, such as Texas, have made strides in this area, there are 15 states that are still “living in a prehistoric age and relying on 1970s and 80s data and technology” in their permit granting process for project cargo shippers and their heavy-haul motor carrier vendors, Todd said.

“These states are not taking into consideration the extreme progress that’s been made in the manufacturing of specialized trailers and such,” he said. “We’ve concluded it costs the carrier an additional 40 percent to 80 percent either running through or around a ‘barrier’ state.”