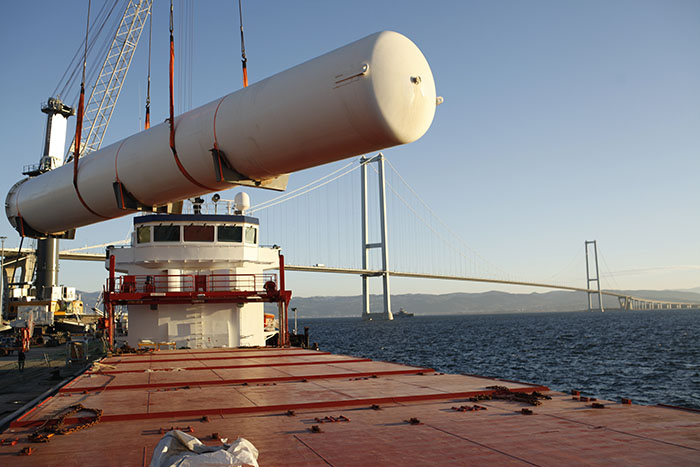 New projects such as the development of ports and infrastructure related to massive natural gas fields in Mozambique are creating new challenges for the project logistics industry. Photo credit: OSZN/Shutterstock.com.

US import tariffs and reciprocal duties abroad have fundamentally redrawn trade lanes for multipurpose and heavy-lift (MPV/HL) carriers, according to Robert Jacquet, VP of commercial with BBC Chartering, which operates approximately 170 ships in tramp service globally.

Steel and concentrate cargoes, for example, were moving regularly in and out of the United States not long ago, but “that whole trading pattern has stopped,” Jacquet said during a panel discussion at the Breakbulk Americas conference in Houston on Oct. 10.

Once-dependable trade lanes have disappeared, as buyers are reluctant to trade with the US due to the inherent uncertainty around additional tariff costs. “Soybeans were gone overnight, and that takes away lots of vessels counting on soybeans as repositioning cargo,” he said, adding that with buyers now executing long-term contracts with non-US suppliers, there’s no way to know if lost trade volumes will ever return.

Bill Keyes, global logistics director – operations with global engineering, procurement, and construction (EPC) firm Fluor, lamented the suddenness and unpredictability of changes to trade policy during the Trump administration. “You have cargo moving on the water and a tweet comes up and trade compliance throws up a red flag and you have to divert or change your philosophy,” he said.

Trade routes have changed, agreed Susan Oatway, senior analyst for multipurpose and breakbulk shipping with Drewry Maritime Research. “Demand is definitely there, but not in the same places that it was previously. From both sides of the table there is a lot more interest in working out where the new cargoes are, where the trade lanes are,” she said.

This dynamic has forced some operators to focus more heavily on certain trades or commodities. “We have fewer ships than BBC, and we’ve cherry picked some trade lanes to focus on,” said Michael Morland, general manager for the Americas with AAL Shipping. AAL is counting on a rebound in newer markets such as renewable energy. “Oil and gas had its day but has cooled down,” he said. “We hope for a rebound, but it depends on macro elements.”

Keyes said that from a cargo owner and EPC perspective, the way for service providers to stay at the top of the list is to understand and help solve shippers’ challenges.

Certain carriers, for example, have helped Fluor prepare for the IMO 2020 low-sulfur mandate, he said. Keyes said he began pricing the new rule into his transportation budgets 18 to 24 months ago. “I realized I had to pick a benchmark and build in escalation, and that was with help from carrier data,” he said.

Fluor’s logistics service providers recognize the EPC’s challenges and are proactive in suggesting ideas for improvement, Keyes said, and not only for current issues. Engaged providers help the company solve supply chain problems that don’t exist yet but will in three or four years, he said. Keyes cited two well-known liquefied natural gas (LNG) projects in Mozambique that although still in their early stages now, will pose new challenges. Atop that list, there is no port and precious little inland infrastructure surrounding the massive oil fields that will allow the country to export as much as 31 million metric tons of natural gas annually, according to Reuters.

“Fluor will work those projects,” he said. “We’ll see a trade lane going to a port that doesn’t exist now.”

But Jacquet was quick to point out that “consolidation doesn’t cure anything,” when it comes to chronic overcapacity within the global MPV fleet. “The ships are still there. [There is] still an oversupply of capacity. The market is not there to fix all the vessels.” To bring rates up, vessels will have to be scrapped or laid up, he said. And until that happens, carriers won’t be able to obtain the financing needed to invest in new ships.

“The current consolidation trend has nothing to do with the market,” Oatway agreed. “It’s making no impact on the market. It helps operators, but not the market as a whole.” There is an oversupply of ships in the sector that will not be addressed until scrapping rates increase. “We have to get rid of those old ships,” she said.

“I very strongly agree,” added BBC’s Morland. Consolidation is “a nice buzzword, but it doesn’t really apply until scrapping picks up. But that’s difficult when you look at the underlying [vessel] ownership structure. There is private money tied up against these assets, and as long as that’s the case, who decides who takes the hit? It’s a complex environment to regulate or standardize,” he said.

Keyes noted that EPCs and their clients are among those that benefit from overcapacity. From the EPC’s perspective, it’s a buyer’s market, not so much for megaprojects, but for smaller “bread-and-butter” projects in the $1 to $2 million range, he said. “Intellectually, I agree that there is overcapacity, but we can’t forget that some benefit,” Keyes said. “It’s a business decision for the market you are serving,” and smaller EPCs do leverage that overcapacity, he added.

However, Oatway said most of the sector’s overcapacity is in overaged and smaller ships, not ships that an EPC such as Fluor would engage. These ships still impact the MPV/HL market because many of them trade “at the edges” of the sector, picking up steel and other neobulks that the MPV/HL fleet could potentially carry as backhaul or base cargo, she said.