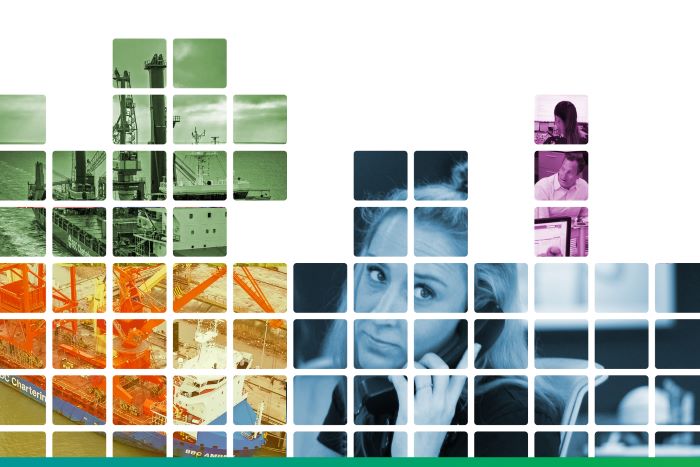 BBC's chartering desk interacts as they fit together solutions for feeding ships with freight and moving cargo around the globe. Credit: BBC Chartering / Lilian Kalmus.

(The following is part one of a six-part series examining vessel chartering in the breakbulk sector.)

“There’s only a small group of people in the world with this expertise,” Amanda Coughlin, a senior chartering broker with ocean carrier BBC Chartering, told JOC.com. Chartering, her profession, presents new conundrums every day as she and her teammates match cargoes, ships, voyages, and dates, resolving pieces of a never-ending, globe-spanning project and breakbulk cargo puzzle.

How a carrier such as BBC gets its work done, including arriving at its rates, is a question that outsiders, and clients, can find exasperatingly opaque. At least some of that opacity lies in the shifting complexity of chartering — an activity that Raymond Fisch, a senior vice president with the BBC team at its Leer, Germany, headquarters, has called “three-dimensional Tetris.” At its core, “chartering” simply refers to a person or business contracting for cargo space with a ship operator. But with project and breakbulk cargo, chartering is rarely that simple.

First thing in the morning, BBC's Houston chartering desk (literally, eight or nine desks pushed together to make one long rectangle; figuratively, the team that handles Houston's chartering inquiries) wades into the 800 or so emails that arrived in their shared inbox overnight. As senior chartering broker Barry Irish puts it, the desk is “the funnel,” routing emails to engineering, port captains, operations, documentation, and sales. Some 200 to 300 will be specifically for the chartering desk; those that need immediate action go into the shared quote folder.

BBC's fleet is assigned based on cargo, said chartering director Robert Jacquet. “It's all spot business, and all about matching ships and heavy-lift capacity within a time window. BBC is very much oriented towards spot, and all about price,” he said.

To provide quotes to potential customers, the chartering team makes dozens of calculations every day, figuring voyage times, port costs, bunker costs, etc. They use automated calculators and programs and back up these calculations by hand, so errors will be caught. “Someone lacking experience could use the program to figure a voyage from Houston to Antwerp, for example,” Jacquet said, “and come up with completely wrong prices.”

Jacquet is responsible for the group overall, making sure the right ships are available in the right places, Irish said. “He keeps an eye on what the ships are doing while we tend to the details. We interact as we need to and get the ships fed with freight. It's a group effort.”

All ship assignments for the Houston region: tramp, liner, and semi-liner, are made from the chartering desk under the guidance of Jacquet.

BBC operates a fleet of approximately 170 multipurpose/heavy-lift (MPV/HL) ships ranging in deadweight tonnage (dwt) from 4,320 to 56,800. Most of its ships fall between 10,000 dwt and 17,000 dwt. By number of ships, BBC's is by far the largest fleet in the sector. Combined lift capacities range from 120 mt to 900 mt, with the majority of ships sporting 240 mt to 700 mt. According to Netherlands-based maritime consultant Dynamar, BBC Chartering manages some 6,000 port calls annually.

The Americana line calls Rio de Janeiro and Zarate, Argentina, a port near Buenos Aires. Other calls are inducement or contract calls. “We'll tell the team ‘we have this amount of cargo to these places,’ and they give us our ship options and we make a decision,” said Natera. “We might need a special kind of tonnage to handle a particular cargo or for backhauls. It's not just the outbound cargo. You have to consider the load ports and other requirements, too.”

“One week will be slow and the next will be super busy,” Clark said. “We play different scenarios and find the perfect combination. Sometimes cargo can't be combined.” If they accept a full charter, they must find another solution for any other cargo affected. And, “we must position into the right region. It's a juggling act, and we have to communicate.” Once the cargo is booked, the stowage plan is started and operations takes over, she said. “Every week is different. Every day is different.”

Post fixture manager Lilian Kalmus organizes information about cargoes, regions, and vessel nominations, attaching booking notes and packing lists. Once a vessel is nominated, she generates the voyage — dates, load and discharge port, terms and cargo, etc. — and sends the results out to the other teams and to clients.

Short, collaborative meetings are the norm on the chartering desk, said Coughlin. “I like talking about [chartering] and shooting ideas out to each other,” she said. “It’s tricky — it’s so important to have the right personalities on the desk. We work in such an open environment. We rely on each other, so we have to have the right people, the right chemistry.”

Coughlin works directly with cargo owners, including original equipment manufacturers (OEMs) and engineering, procurement, and construction (EPC) companies. “I have to learn their special language,” she said, as her clients don’t always understand ocean transport. “I advocate for them internally,” Coughlin said. “But I also have to remain my company’s representative and make sure we are sticking to the terms and conditions of the contract(s).”

“There’s a lot of salesmanship around showing that a rate is worth it. Others may be cheaper on paper, but you have to be savvy and make your client aware of potential traps, beyond just looking at the price,” she said. These traps can include additional or unexpected surcharges or not looking carefully enough at transit times, she said.

To the Black Sea?

A project forwarder with a cargo owner client who has a problem and a fixed budget contacts BBC looking for a potential solution. The owner needs to move her cargo from the Great Lakes to the Black Sea, but the ship she's already booked on — not a BBC ship — is running late. Can Irish, a senior chartering broker, solve this problem? The owner's fixed budget is probably going to be too low for BBC, but “we go through our exercise to figure out if we can compete,” Irish said.

First steps, to be done before contacting the captain of an available ship, are to check dates and freight rates. There's one BBC Chartering ship in the right region and heading in the right direction for this cargo, he said. However, it can't make the inquirer's preferred discharge date because it first must stop in North Africa to discharge grain. “That takes a week in [this African port],” he said. On top of that, his rate calculation comes out $100,000 over the cargo owner's budget, “so that will kill it,” Irish predicts as he sends the quote to the forwarder. Unless he hears from the forwarder again, he will not know how the cargo owner solves her problem. She could find another carrier, or she could just choose to be late into the Black Sea on the carrier she booked with originally, he said.

All shipping lines incur delays, Irish said. “We are not immune to that. We could have a booking but be late to the load port, and then our client would be out shopping for alternatives against us.” Many things can delay a ship: strikes, bad weather, congestion in the Panama Canal, congestion in ports, mechanical problems, etc.

Similar to other tramp (or spot) carriers, BBC books against a window of dates, called the laycan (an acronym for “laydays and canceling date”). The initial date is the opening of the “window” during which the customer is obligated to accept the vessel in the load port; the final date is the canceling date. “That entitles us to present a ship anytime between the first and last date,” Irish said.

When they know they'll be late, they tell the customer and ask to maintain the booking, Irish said. Normally, the booking contract gives the client a certain amount of time to respond to the late notice. If they do not, they've accepted that the ship, and thus their cargo, will be late. When the forwarder calls with an issue such as this delayed Black Sea cargo, it means his client is hoping to find an alternative before her response time with the original carrier has ended. “It's an urgent matter,” Irish said.