US auto imports expected to continue rebound after late 2020 recovery

US auto imports expected to continue rebound after late 2020 recovery 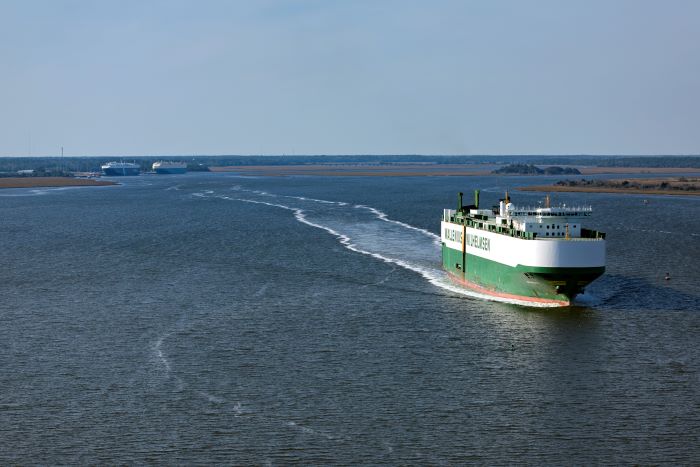 A late 2020 rebound is expected to continue into 2021, boosting the outlook for roll-on/roll-off (ro/ro) cargo in the United States, but a global microchip shortage and recurring COVID-19 lockdowns could hamper that momentum.

“We take a shorter view of the market than we used to,” said Flavio Batista, vice president of sales for North America with ro/ro carrier Wallenius Wilhelmsen Ocean. While 2021 volumes have the potential to reach 2019 levels, the microchip (semiconductor) shortage could affect market dynamics by slowing vehicle production, he told JOC.com. Chips aside, his customers are positive through the summer. “Beyond that, it’s hard to get visibility,” he said.

The global chip shortage is a knock-on effect of the COVID-19 pandemic. Chips are essential to the latest cars with displays, smart parking, internet connections, and so on. Auto manufacturers scaled back estimates of the chips they’d need back at the onset of the pandemic when car plants were closing. Semiconductor manufacturers shifted capacity to supply booming consumer electronics makers as consumers ramped up their buying of laptops, smart TVs, and other gadgets to use at home during the shutdowns, according to Automotive News.

Vehicle sales recovered faster than expected, but now shortages are holding back production. Auto manufacturers are finding themselves at the back of the chip line. Auto manufacturers “are competing for supply in a market they’ve never competed in before,” Alberto Cabrera, director of automotive accounts with the Jacksonville Port Authority, told JOC.com. “The same parts and pieces are needed for vehicle production and for phones and PCs. [OEMs] have not dealt with that yet.”

Toyota and Honda scaled back or temporarily halted production in Asia and North America in January because of the shortage, according to Automotive News. The chip shortage could persist through the first half of 2021, according to IHS Markit, parent company of JOC.com.

A “V-shaped” 2020 saw steep slowdowns in Q2 and a bounce-back in Q3 and Q4 that still left US vehicle imports off 14 percent for the year, according to data from PIERS, a sister company of JOC.com within IHS Markit. Manufacturer and dealer incentives, online sales, government stimulus, the new presidency, optimism due to the vaccine rollout, and improving economics helped power recovery during the second half of 2020, according to IHS Markit.

“2020 was your classic V-shape,” agreed Bruce Kuzma, senior director of trade development with the Georgia Ports Authority. “We weren’t sure it would happen that way. Things started off okay, and then with COVID we had a decline.” The third quarter was positive year over year, a relief after the second quarter, and then the fourth quarter was more than just a rebound. “Double-digit growth,” he said.

Effects from the pandemic now seem to be driving a huge demand for cars, Kuzma said. “First, there's a shift from people using mass transit back to car ownership. If they have money to spend, they are spending it on things they can use today,” he said. “They are not going on long vacations involving airplanes or cruises. They are driving on vacation. [And] they are spending on things they can utilize at home every day. Upgrading vehicles is one area where that is going on.”

The Port of Jacksonville, Florida, took a “tremendous dive” in ro/ro cargo in early 2020, when the virus lockdown was at its strongest, Cabrera told JOC.com. On busy days in normal times, the port sees as many as six ro/ro ships per day. “When you are down to two or three ships a week — that is a significant drop,” he said, adding the quick recovery of late 2020 is thanks to the vehicle original equipment manufacturers (OEMs) getting back online to build cars.

The Port of Baltimore has also seen a tremendous rebound for ro/ro, executive director William Doyle said. In December, car and light truck volume was 289 percent higher than during its May COVID-19 low point, he said. “During the early stages of COVID-19, auto plants, distribution networks, and supply chains were severely impacted,” said Doyle. “However, the recent months have been very encouraging.”

Port Hueneme, California, suffered an 18 percent drop in car imports when automakers shut down operations in March, according to Dona Lacayo, chief commercial and public affairs officer. “California dealerships were not allowed to do in-person sales during lockdown, which impeded our ability to receive more vehicles,” Lacayo told JOC.com. “We had 30,000 cars in the pipeline coming to the port when the pandemic hit … Normally, we had four to six auto ships a week, but during the pandemic, we had just two ships a week calling, and sometimes we had none.”

May and June were Hueneme’s worst months since the 2009 recession, Lacayo said. However, “we recovered very well after August and made up considerable lost ground,” she said. Overall, Hueneme handled 431,018 mt of automobile cargo in 2020, down 14 percent from 2019’s 503,338 mt, according to PIERS, a sister company of JOC.com within IHS Markit.

Three regions dominate global automobile manufacturing: the three northeast Asia countries of Japan, China, and South Korea; Europe and the Mediterranean; and North America, including Mexico. Combined, they manufactured 84 percent of all units, a share that has barely changed over the past five years, according to Dynamar 2020 Ro/Ro Shipping Analysis: Evolution, Principles and Players, published in December. Dynamar is a maritime consultancy based in the Netherlands. Within these figures, the northeast Asia group accounts for between 42 and 44 percent, Europe/Mediterranean accounts for about 23 percent, and North America’s share is between 18 and 20 percent.

Vehicle imports from Mexico and Asia make up most of the ro/ro cargo at the Port of Jacksonville, with many European brands arriving from Mexican manufacturing facilities, Jaxport's Cabrera told JOC.com. He expects near-sourcing to increase in 2021 and beyond, with more production moving to Mexico.

At Brunswick, vehicle exports are fueled by southeastern US auto producers. “We have a lot of vehicles going to Asia, with China being a primary consumer,” Kuzma said. Imports arrive from Europe, Korea, Japan, and Mexico, he said.

Georgia has not yet seen a huge inflow of electric vehicles, but Kuzma expects that to change. “The traditional model producers, whether European like VW or BMW or US like GM, Ford, and Chrysler, will begin to start putting out electric vehicles beginning in 2021, and I think we'll see a shift at Colonel’s Island,” he said.

The ships that transport vehicles and high and heavy cargo around the world are deep-sea car carriers, essentially floating parking garages, and, to a lesser extent, “conventional” or multipurpose ro/ro ships with both ramps and lift capacity.

Dynamar lists a global fleet of 491 conventional or multipurpose ocean-going ro/ro vessels owned by carriers such as Grimaldi, Bahri, and Messina Line. The sector is exceptionally fragmented, in that the 15 largest operators of this tonnage control only a quarter of the fleet by number of ships — i.e., about 124 vessels. The Naples-based Grimaldi Group, with a fleet of about 50 ships, dominates the segment, according to Dynamar’s 2020 ro/ro report.

The global fleet of car carriers comprises about 713 ships, according to Dynamar. The 15 largest operators control 87 percent of the car carrier fleet, or about 619 ships, making it far less fragmented than either the multipurpose/heavy-lift sector or the conventional MPP ro/ro carriers.

The Wallenius Wilhelmsen group, which includes Wallenius Wilhelmsen Ocean, Eukor, and US-flag carrier ARC, is the largest car carrier, controlling about 17 percent of the sector’s ships, according to Dynamar. Another four operators — NYK RoRo (including UECC), MOL ACE, Hyundai Glovis, and “K” Line Global RoRo — have fleet shares of 10 percent or more.

Special correspondent Chris Barnett contributed to this story. Contact him at chris@cbarnmedia.com.