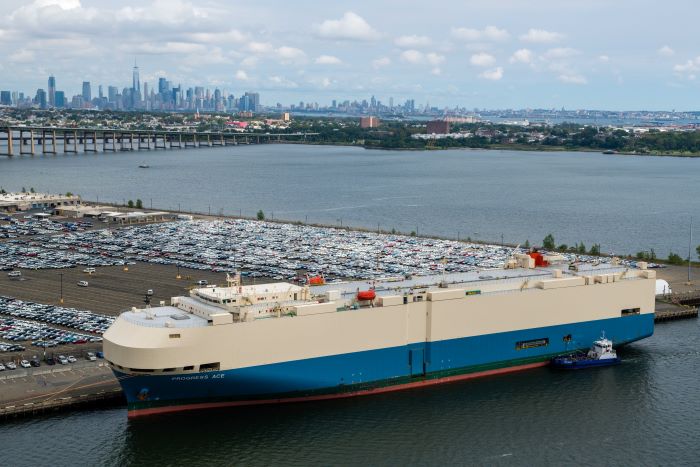 Correction: The auto export tonnage figures in the fourth paragraph were incorrect in the original version of this story and have been updated.

The US roll-on/roll-off (ro-ro) automobile market sent mixed messages in 2019. Global auto sales were down from the previous year, but US imports and exports of vehicles were both up.

Through the first 10 months of 2019, total US auto imports ticked up 3 percent, according to PIERS, a sister company of JOC.com within IHS Markit. The Port of Baltimore maintained its status as the largest import gateway for the eighth year running, as inbound auto volumes jumped 8.6 percent year over year to 698,952 metric tons (mt). The Port of Jacksonville, meanwhile, leapfrogged the Port of New York and New Jersey to become the second-largest ro-ro auto import gateway in the country, thanks to an 11 percent increase in volume during the same period.

On the export side, total US volumes grew 1.3 percent year over year through October, a sharp contrast from the 12.2 percent decline seen in the first 10 months of 2018. The Port of Jacksonville maintained its comfortable lead over its competitors, handling 176,156 mt, nearly as much as the next busiest ports — Baltimore (down 44.1 percent) and New York-New Jersey (down 27.2 percent) — combined, despite a 7.3 percent decline. Port Houston saw the largest increase of the top 10 auto export ports, but from a much smaller base, as volume skyrocketed 365.5 percent to 55,851 mt.

Several port representatives and carriers credited a strengthened used car market in West Africa as a key driver of the auto export market’s return to positive growth in 2019.

US ports moved healthy volumes despite a slightly contracted demand for autos, both in the United States and across the globe. Analysis by IHS Markit revealed US demand through November was down 0.8 percent from the previous year. Although final figures for 2019 were not yet available, the analysis projected end-of-year light vehicle demand to total about 17.1 million units, down 1.1 percent from 2018. Analysts expect the downward trend to continue into 2020, forecasting a further 2.3 percent decrease to 16.7 million units for the year.

“The threat of tariffs moves a lot more cargo,” Patrick Cooper, Houston-based area manager of the ro-ro division at NYK Line, told JOC.com. “Certainly, that played a part [in shaping 2019 trade volumes]. The other part is, if you’re producing cars, you have to sell them somewhere. And if the local market is not supporting sales, you have to send them to other markets.”

Although reduced demand is expected to persist in the short term, ports are working to increase their capacity and improve their competitive advantages to attract original equipment manufacturers (OEMs). “OEMs want to go to places that can absorb growth,” said Griff Lynch, executive director of the Georgia Ports Authority (GPA). “Some markets are outpacing others. There’s always going to be shifting business.”

Lynch said GPA officials in recent years decided to apply a principle they use at their Garden City Container Terminal to their auto facilities: maintain 20 percent more capacity than demand. “Our plan is always market-driven,” he told JOC.com.

To that end, GPA in 2017 began building up 250 acres on spec at the Colonel’s Island autoport in Brunswick. Lynch said he was shocked to see how quickly the space filled with leases. Today, it boasts three berths and three on-terminal auto processors.

More recently, the port acquired an additional 40-acre dockside parcel at Colonel’s Island for auto processing, and officials plan to construct more than 14,000 feet of new rail track. The parcel includes a nine-acre staging area for high and heavy equipment.

The Port of Baltimore, which is the farthest-inland East Coast port, announced plans last June to renovate an unused fruit pier for storage of autos and other cargo. Auto processor AMPORTS recently acquired 60 acres of land at the port to create a pier extension for autos and develop additional storage space. Baltimore is also in the process of reinforcing and strengthening berths at Dundalk Marine Terminal, its main terminal for handling high and heavy cargo.

AMPORTS also recently reached an agreement with the Jacksonville Port Authority (JAXPORT) to add 22.4 acres of property for auto processing and storage at the Dames Point Marine Terminal. The company plans to develop an additional 40 to 45 acres of JAXPORT property at Dames Point by 2023 to continue serving a fast-growing region for auto production and a healthy consumer market across the Southeast.

Meanwhile, a major salvage effort will take place in the coming months to remove the vehicle carrier that capsized last year in St. Simons Sound off the coast of Georgia. Despite its presence next to the ship channel, Lynch said the vessel isn’t obstructing traffic to and from Savannah or Brunswick. The US Coast Guard is running a unified command to organize salvage efforts and hopes to move the vessel before hurricane season begins on June 1, 2020.

The Port of Philadelphia’s (PhilaPort) current market share places it well behind the heavy hitters in vehicle imports, but after increasing its inbound volume nearly 50 percent in the first 10 months of 2019, officials expect continued growth this year. PhilaPort cut the ribbon on its new Southport Auto Terminal and Vehicle Processing Center in October 2019 and is currently in the design phase of a project to construct a third berth at the terminal. Officials hope to have the new berth up and running within the next 18 months.

At the Port of New York and New Jersey, where space is at a premium, the focus is not on expanding into new acreage but instead on improving the flow of cargo. “There’s not a port in the country that can build themselves out of the capacity problem that comes from autos being stored at the port on a flat space,” said Beth Rooney, deputy port director of the Port Authority of New York and New Jersey (PANYNJ). “In this country, we need to go to garages, and/or there has to be more of an incentive for the OEMs to manage their supply chains better… so they’re not taking up valuable waterfront property.”

In partnership with auto processors and OEMs, PANYNJ has laid out a plan to provide additional capacity to accommodate auto volumes they anticipate will double within the next 30 years. “Velocity is going to be important,” said Rooney. “We don’t have any more land to grow. We have to use the land that we have smarter and more productively.”

Alongside the competition on the East Coast, the Pacific Northwest is another hot spot for growth. Last year, Wallenius Wilhelmsen Solutions opened a new on-port vehicle processing center at the Port of Tacoma. The 90-acre piece of land, leased from the port, was previously home to a Kaiser Aluminum smelter site. The facility can handle up to 100,000 vehicles per year.