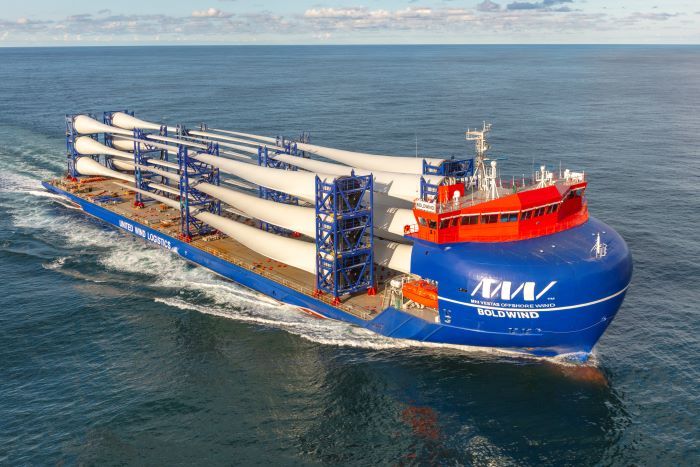 As offshore wind farm components become larger and more powerful and are developed in increasingly deeper waters, the industry faces a shortage of vessels capable of transporting components and building the turbine arrays, according to a top shipping executive.

“Where you have projects with more than 100 turbines — that’s at least 300 blades — there aren’t that many multipurpose vessels or turbine installation ships available with either the deck space or crane capacity,” Andreas Rolner, managing director of Hamburg-based United Heavy Lift (UHL), told JOC.com.

“I do think there will be bottlenecks in the future. There are not going to be enough suitable ships,” Rolner said.

More than 15,000 offshore wind turbines are forecast to be installed globally by 2025, rising to 26,900 by 2030. This will be a 270 percent increase from 2020’s 7,233 installed turbines, according to the UK-based research firm Clarksons Platou Renewables. The largest turbines will grow from about 12 megawatts (MW) in 2021 to 15 to 20 MW by 2030, according to the International Energy Agency, and the rotor diameter of each turbine will also increase to more than 200 meters (656 feet).

Along with offshore turbine nacelles, blades, and towers, turbine foundations (the bases of wind turbines that are affixed to the sea floor) are becoming larger and heavier, from 1,900 mt up to 2,500 mt, with diameters up to 36 feet and lengths up to 361 feet.

Turner Holm, head of research at Clarksons Platou Securities, told an Aug. 18 webinar that offshore wind is expected to be the fastest growing energy source over the next decade. Installed capacity will increase six-fold over the next 10 years, from 31 gigawatts (GW) by the end of this year to 225 GW in 2030, Holm said. However, this growth is from a smaller base than other energy sources, and the installed capacity of offshore wind stations by 2030 will still be a relatively small fragment of the total global energy mix, equal to about 10 percent of the current capacity of coal-fired power plants, Holm said.

This projected growth in the offshore wind market inspired UHL to buy nine F900 Eco-lifter multipurpose/heavy-lift (MPV/HL) ships from Zeamarine in late 2019 and early 2020. Each vessel has a weather deck of 2,990 square meters suitable for carrying larger turbine blades and a combined lifting capacity of 900 metric tons (mt), Rolner said.

These ships have larger weather decks and greater hold and crane capacity than other MPV/HL ships in the UHL fleet, Rolner said. As components grow in size and weight, older vessels, with their limited deck size, smaller hold and crane capacity, and higher fuel and operating costs, will be increasingly marginalized and less employable for moving offshore wind, he said.

“Even if a heavy-lift vessel has sufficient crane capacity, it would be challenging to load foundations with such dimensions; they are too long to be loaded in between the cranes in a tandem lift. The limiting factor, though, is the vessel is only likely to be able to accommodate two [foundation] piles on deck, which is not economically feasible,” Rolner said.

Rolner’s views were echoed by Clarksons’ Holm, who pointed out that older vessels would have to undergo significant upgrades to increase crane capacity enough to handle larger turbines and blades, while some existing vessels would be capacity-constrained.

Rolner said UHL performed a record shipment last year of 156 Vestas V-120 blades, equating to 5 million cubic feet (142,000 cubic meters), aboard the Zhi Xian Zhi Xing open-deck carrier. However, the same vessel would only be able to carry 18 blades for GE’s 12 megawatt Haliade-X wind turbine, the world’s most powerful blade with a rotor diameter of 722 feet, according to a study done by UHL.

David Matthews, sales director for GE Renewables Wind Northern Europe, which is plowing $1 billion into on- and offshore wind development, said during the Clarksons Platou webinar that the company has lost offshore wind turbine projects because GE could not get the right vessel.

To augment capacity, UHL has now partnered up with China’s Guangzhou Salvage Bureau to manage its fleet of five semi-submersible ships, a deal that gives UHL access to these five module carriers for oil and gas, offshore renewable, and related transportation contracts.

It’s not just MPV/HL and heavy-deck ships that will be in short supply when it comes to offshore wind. To serve the growth expected, Clarksons Platou Renewables predicts that 10 additional wind turbine installation vessels will be needed by 2024.

Holm said there are about 16 wind turbine installation vessels in service now, with another seven on order to be delivered by 2023. However, “out of the 23 vessels, 10 are not able to install the new generation of turbines. In the existing fleet, many units will require significant crane upgrades to remain relevant,” he said during the webinar. These upgrades include cranes capable of lifting around 1,000 mt to hoist into place the heaviest blade and turbine components for the next generation of turbines, Holm said.

Clarksons estimates it would cost $50 million to upgrade each onboard crane to handle heavier and larger turbine equipment.

“Installation efficiency will decline as larger turbines gain market share,” Holm said. Turbine installation vessels can carry four 8 MW turbines, but as the equipment gets larger, vessel efficiency will fall. Typical installation ships will only be able to carry and install three 12 MW turbines, Holm said. This will increase the number of ships required and/or increase the number of voyages needed.

Installation vessels need such high lifting capacities because the towers are typically installed fully assembled, Rolner explained. During transportation, these towers are usually split into three sections, which significantly reduces the weight. Most heavy-lift ships have a combined crane capacity of 500-800 mt, he said.

Rolner said even though a shortage of high specification MPV/HL ships is forecast for 2024 and 2025, the current market is over-tonnaged, particularly with the older vessels that carry smaller components.

“The biggest problem we have and have had since 2009 and 2010 is an oversupply of ships. There hasn’t been a lot of investment in new ships, but then we haven’t seen that much scrapping. But this over-tonnage is going to cleanse itself at some point. I do see a lot of older vessels that have outdated crane capacity and cargo intake,” Rolner said.

“Many older vessels have very high fuel consumption and high emissions, while modern main engines and optimal vessel design reduce consumption and emissions by 30 percent,” he added. “Consequently, older vessels may not be competitive anymore. I think they’ll have a tough time finding employment,” Rolner said. The industry is slowly waking up to these looming transportation issues, he said.

Ideally, turbine components would be fabricated close to installation sites, “but this comes at a cost, which is why it’s cheaper to ship components from Asia or the Middle East to Europe and North America,” Rolner said.

The global economic downturn caused by the COVID-19 pandemic has slowed the development of wind farm projects, but the sector is far from moribund, he said. “We are receiving quite a lot of inquiries about our semi-submersible vessels, although everything is being delayed,” he added.

“Projects have final investment decision [FID] approval, so they will come. We have contracts for next year, so I’m quite optimistic about the outlook,” Rolner told The Journal of Commerce.

UHL’s traditional heavy lift markets have been in the oil and gas sectors, but with energy majors including BP, Shell, Total, and Equinor shifting farther into renewable energy, Rolner is refocusing the company on wind power, liquefied natural gas, and petrochemical projects.

Rolner said that instead of using oil as a fuel, energy majors will use it as a feedstock for increased petrochemicals production, requiring investment in heavy process plant and equipment shipped by project cargo and heavy lift vessels.

A sister company, United Wind Logistics, augments UHL’s own fleet of semi-submersible and HL ships, while also chartering vessels as needed from other owners and operators. “We look at the most optimal and cost-effective solution,” Rolner said. UHL in August teamed up with Japan’s NYK Bulk and Project Carriers, utilizing its 19,812-dwt module carrier Yamatai to transport four jacket foundations for Taiwan’s Changhua offshore wind farm.

Rolner said UHL has largely completed the development of its agency network following the appointment in July of an agent in Dubai jointly with Ocean7 Projects. “We have a relatively small fleet of 21 ships, including the five Guangzhou Salvage semi-submersibles, so it doesn’t make sense to have the expense of our own offices,” Rolner said.

“Instead we have developed a network of agents. We are in China, Japan, the US, and Dubai. Who knows how it will turn out in the future? We could be in South America or Africa,” he said. “An agency is an easy way to go forward — it’s uncomplicated — but right now we have quite a good set-up. Expanding the agency network further is not on the drawing board,” Rolner told JOC.com, adding that the firm has also ruled out acquisitions for the time being.

“We’re a relatively young player. We are only five years old,” Rolner said.