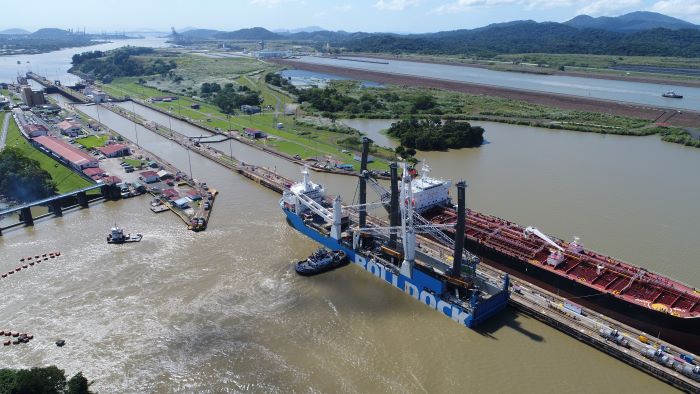 The facility, which will eventually cover about 450 acres (100 hectares), will have a roll-on/roll-off (ro-ro) jetty to facilitate the transfer of modules, oil drilling platform components, and other extremely large project cargoes to and from the firm’s fleet of heavy transport ships and module carriers, according to Robin Koenis, managing director of Roll Group for the Asia Pacific region.

Koenis said the jetty access “is perfect for our company with its land-sea combination. Modules will be built here in the future and we can handle the transport of these modules with our fleet of adaptable vessels.” The complex “will be fairly unique for the region,” he said. “We can import and export without any issues.”

“We started talking to BOMC about a year ago as Roll Group began opening a raft of offices around the region, including in Singapore, Malaysia, Indonesia, Thailand, and South Korea,” Koenis said. “We’ve done a lot of business with Qube and we have good relations with them.”

Adriaan Aarts, Roll Group chief executive, said in a company statement that the Bintan yard “helps us with our strategy to expand the land-based business and to focus even more on combined land-sea projects. In addition, Bintan is a 60-minute ferry ride from our office in Singapore.”

There is also a daily freight service by landing craft or barge between BOMC and Singapore’s Jurong port.

Phase one of the Bintan complex, including a 600-foot-long jetty, is complete, and construction of the second phase is under way. Once fully complete, the facility will have open storage for modules and equipment, covered warehouses, workshops, and module fabrication yards, Koenis said.

“We can offer facilities to do the load out, ocean testing, and transportation. Some customers deal with three or four different companies. We are one point of contact that can do everything,” Koenis added.

Decommissioning market expected to heat up

Boston Consulting Group estimates Southeast Asia’s decommissioning market to be worth between $30 billion and $100 billion. In a 2019 report, the business advisory firm forecast that more than 200 offshore fields would stop production by 2020 and estimated 1,500 structures and 7,000 wells would be decommissioned — i.e. removed and the seafloor restored — in the region by 2038. The consultancy said the four biggest markets are Indonesia, Thailand, Malaysia, and Vietnam.

“There is huge potential for the whole of Asia Pacific,” Koenis said of the decommissioning and fabrication markets. “There is a lot of cargo for our module carriers out of Asia for Australia and the US.”