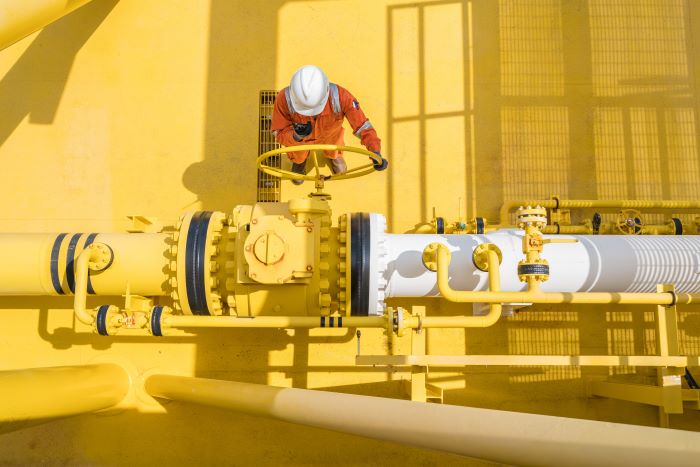 Capital investment plans for oil and gas projects such as this offshore facility have been slashed as oil prices collapse. Photo credit: Shutterstock.com.

The project and breakbulk cargo transport logistics segment is keeping a weather eye on oil prices, as cargo owners in that key segment cut billions in planned capital expenditures in the wake of the coronavirus disease 2019's (COVID-19's) demand destruction. That translates into a looming shortage of oil and gas-related cargo bound for the “project pipeline,” which typically doesn't start moving until construction is imminent.

For just the North American E&P segment, capital budgets shrank from $81 billion to $43 billion, or 47 percent, according to a Strategic Horizons webinar on the energy outlook presented Wednesday. Strategic Horizons is an energy executive service of IHS Markit, parent company of JOC.com.

All capital outlays are under pressure, said Chris Elsner, associate director with Strategic Horizons. “The IOCs do not want to be stuck in a megaproject when the outlook for that project is not robust,” Elsner said. Returns on upstream oil and gas investment have not reached historic norms for most of the past decade, he said.

In a clear sign that the value of oil and gas assets is falling, seven IOCs have announced new impairments, or write-downs, reducing the book values of their assets by somewhere between $55 billion and $69 billion in the face of those changes to the market, according to Strategic Horizons.

The long-term price outlook for oil has dampened in large part thanks to shale's ability to quickly add production capacity when prices rise, thus undercutting that price. Shale production has grown every time the price has gone above $65 per barrel, Elsner said. It's not a certainty that this trend will continue, but a major question in the medium term is whether US E&Ps have learned their lesson and will refrain from chasing the price with incremental capex, he said.

While the global economy saw some demand improvement with a second-quarter “crash correction,” oil demand was again stuttering in July as a new wave of infections hit.

The sector is also grappling with the first stages of a long-term “energy transition” that will reduce global dependence on fossil fuels. Investors are pressuring IOCs to account for climate-related financial risk, Elsner said. Companies are rethinking traditional oil and gas business models and looking for energy investments such as utilities and renewables that have stronger growth potential and less volatility. “Investors demand returns, and there is also a drive to lower carbon footprints,” Elsner said.

Those trends will particularly affect IOCs based in Europe such as Total, Eni, BP, Equinor, and Royal Dutch Shell, Elsner said. Portfolio diversification into lower-carbon activities will be more difficult for US-based Exxon and Chevron, which have cultivated a reputation as dividend stocks, much more so than the Europeans, and placed a greater priority on maintaining that dividend, he said.

However, Elsner told JOC.com, it's important to understand those trends in context. While alternative energy sources will grow, they are developing from a much smaller base than oil and gas, and “we will need oil and gas for a long time,” he said.

Demand will eventually increase as the global economy recovers, Elsner said. “This year is going to be a blood bath and the outlook is indeed bleak, but if there is no upstream investment at all through 2020 and 2021, then there will be a supply shortfall putting upward pressure on prices, most likely starting in 2023,” he said.