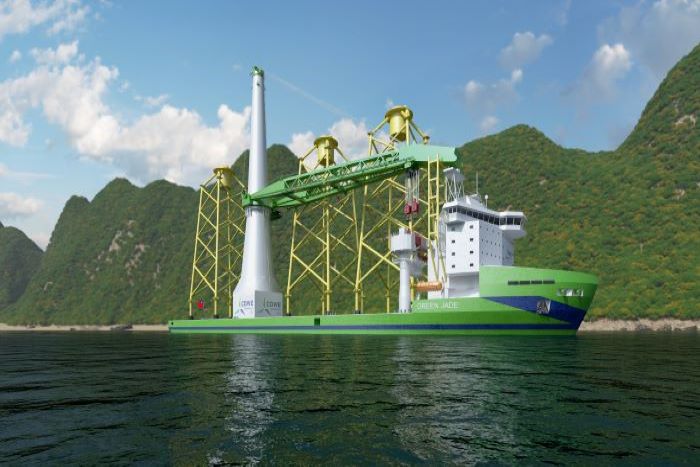 After delivery in 2022, the Green Jade will be deployed in Taiwan’s burgeoning offshore wind energy market. Photo credit: DEME.

After delivery in 2022, the ship will be deployed in Taiwan’s burgeoning offshore wind energy market. The Taiwanese government plans to develop 5.5 gigawatts (GW) of offshore wind energy by 2025, and add another 10 GW between 2026 and 2035, according to the Global Wind Energy Council.

DEME spokesperson Vicky Cosemans told JOC.com that opportunities in the heavy lift, oil and gas, and associated markets in the Asia-Pacific region will also be looked at on an ad-hoc basis.

The vessel will be owned and operated by CSBC-DEME Wind Energy (CDWE), a Taiwan-registered joint venture company between CSBC and DEME Offshore.

“CDWE has contracts in hand in Taiwan for the first three years after delivery,” Cosemans said. “CDWE will participate in upcoming tenders following the next auction round of wind energy contracts in Taiwan and expects to secure additional contracts for the period 2025-2030.”

She declined to comment on the size and cost of the vessel or whether Green Jade is the first in a series of similar ships.

Ship will have 4,000-mt capacity crane

The 710-foot- long ship will have a 4,000-mt capacity crane and the highest dynamic positioning rating of DP3, which would allow the ship to continue operating even with multiple systems failures, according to a statement from DEME.

The ship’s deck space has been maximized to enable the vessel “to transport a multitude of the heaviest monopiles, jackets, wind turbine components, and structures in a single shipment," the company said.

Starting in 2023, the vessel will help transport and install turbines and associated equipment for the Hai Long 2 and 3 portions of the 1,044-megawatt (MW) offshore wind farm being developed by Canada’s Northland Power, Yushan Energy of Singapore, and Japan’s Mitsui & Co.

The ship will also transport and install foundations for the 300-MW Zhong Neng wind farm being developed by the Zhong Neng Wind Power Corp., a subsidiary of Taiwan’s China Steel Corp. CDWE has a preferred bidder agreement with the power company.

Global Shipping Outlook: A Sneak Peek at 2021
Port Performance North America: Managing Cargo Flow During a Pandemic — and Beyond
END_OF_DOCUMENT_TOKEN_TO_BE_REPLACED