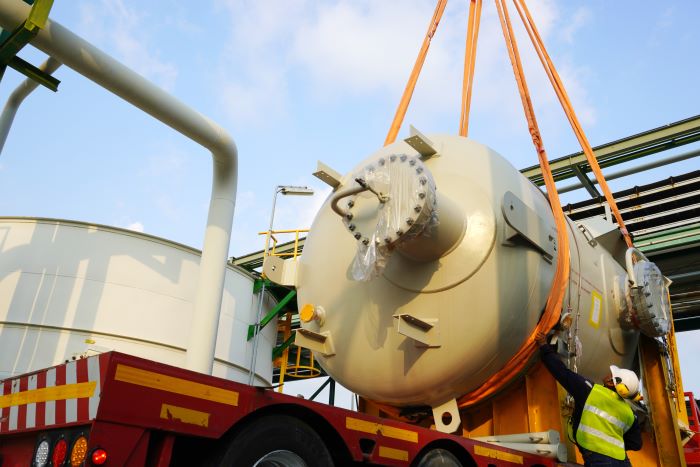 Independent Project Analysis, a consultancy, estimates that some $154 billion in capital projects has been postponed or canceled since the COVID-19 pandemic began. Photo credit: Shutterstock.com.

When oil prices were booming, energy project owners and their logistics providers couldn’t complete projects quickly enough. When oil prices crashed in 2008 and 2015, owners couldn’t cut their costs quickly enough. Now, faced with the COVID-19 pandemic, shrinking investment in capital projects, and a slow-but-game-changing global shift toward a lower-carbon future, the industry is again recalibrating its project logistics relationships.

According to Katherine Koppe, Houston-based global director of business development, industrial projects, with Geodis Capital Projects, many cargo owners are moving away from the “self-performing” model that helped them cut capital project costs after the financial crash of 2008-09 and then, even more markedly, after the oil price crash of 2014-15.

To “self-perform,” many cargo owners — typically engineering, procurement, and construction companies (EPCs) building capital projects for their clients — established in-house logistics teams, often staffed with specialists hired away from project forwarders, and relied less on outside project forwarders. But in 2020, with oil prices unlikely to climb back out of the basement any time soon, cargo owners are laying off logistics staff and “not bringing back personnel, and thus [project forwarders] will play a larger role,” Koppe told JOC.com.

Brent crude, the global benchmark for oil, averaged $41 per barrel in the first nine months of the year, a sharp decline from $64 per barrel for all of 2019, according to data from the US Energy Information Administration (EIA). The EIA in October estimated monthly Brent spot prices will rise to an average of $42 per barrel during the fourth quarter and $47 per barrel in 2021.

Jake Swanson, global head of sector strategy with DHL Industrial Projects, said that he also sees that EPCs are not maintaining their logistics teams and are cutting talent, because “the projects just aren’t there.” Approximately 75 percent of the projects the DHL team had planned to target in 2020 didn’t happen.

“They were not necessarily canceled, but they were pushed to the right [delayed]. … I expect next year to be a lot busier,” he said. When the market picks up again, forwarders with chartering desks, in-house engineering, and other value-add expertise will fill the gap if EPCs no longer have these skill sets under their roofs, he said.

A ‘rethink for the industry’

Those that are struggling might focus on oil and gas resupply or only on certain clients, Swanson said. “In some cases, you do see the trimming. In others, companies are maintaining their teams,” he said. DHL has not trimmed its project group and actually expanded in 2020, he said.

A few forwarders are aligning “more tightly with their legacy organizations. They look at capital projects as risky and at oil and gas as very low- margin, and so they are scaling away from those and focusing on more traditional freight forwarding businesses,” noted Grant Wattman, a project logistics consultant and longtime industry member whose career has included stints as head of Agility Project Logistics and director of logistics with CH2M Hill.

Back when the market was booming, the big global forwarders were strong in projects, said one long-time industry executive who asked not to be identified. “Now the role of the large forwarder in project logistics is going to wane, simply because the market is slow. They will lay off their project people. They don’t have a legacy commitment to project logistics. With legacy project forwarders, it’s a different story. You don’t lay low when the market is weak. You are going to try to get more market share,” he said.

As the energy market evolves, the project logistics industry will have to adjust to a (possibly prolonged) period of smaller projects, Richard Jones, Bertling’s London-based global sales manager, said. Back in the day, “we wouldn’t chase a freight value of less than $10 million. For Bertling, $2 million or $3 million is worthwhile,” said Jones, who worked for Röhlig Logistics and DHL before rejoining Bertling in 2020.

Hark characterizes the current oil and gas capex crunch as “a rethink for the industry, with multiple EPCs exiting the lump sum contract model.” However, while EPCs and the oil service providers are laying off staff, he said, “in two years, they’ll need to hire them back. … We can’t get rid of oil and gas. It’ll come back,” Hark said.

Forwarders that lack diversity are taking a bigger hit with the moribund oil and gas market and must adjust their portfolios to survive, Koppe said. When oil and gas demand picks up again, “there will be a scramble to find a place at the table,” she said.

For now, oil remains relevant despite the COVID-19 pandemic, weak commodity prices, and the looming transition to more environmentally friendly energy sources, Schultz said. “But how will it look in 5 or 10 years?” he asked, given the “bold announcements” from oil majors such as BP about the future of fossil fuels. “They’ve reduced their work force and [are making] large investments in the renewables sector. I believe that’s the start of a transition phase in the oil and gas industries.”

This is borne out by industry trends. Independent Project Analysis, a consultancy, estimates that some $154 billion in capital projects has been postponed or canceled since the COVID-19 pandemic began. Additionally, according to Strategic Horizons, an energy executive service within IHS Markit, parent company of JOC.com, international oil companies (IOCs) have slashed the book values of their assets by somewhere between $55 billion and $69 billion, and several oil majors have announced plans to pivot toward renewable energy.

“COVID-19 is a bit of a game-changer, but we’ve seen three or four recessions, booms and busts,” Jones said. While the cyclicality of oil and gas creates risk, it will remain crucial until new fuel technology takes hold, he said.

“Project demand will never go away. The strategy for Bertling is staying a viable company to support EPCs, oil and gas, mining,” Hark said. “There is a shrinking pool of talent that can handle ‘real’ project cargo. There are a lot of good people in the market looking for work, but this will be short-term. It’s due to the pandemic. And we will still have 10,000 people turning 65 every day in the US.”

Jones said regions that aren’t yet fully developed will remain viable project markets. “You can’t build oil and gas or energy projects in your shed. It has to be done at an industrial scale,” he said. “Development will continue. All people want clean water and electricity. We are not getting out of projects. It is coming full circle.”

Meanwhile, companies must ask themselves how their crisis management plans have proven out during the pandemic, from contingency and communication plans to IT infrastructure, Schultz said. “How proactive can we be? We don’t influence politics or oil prices or COVID-19 guidelines. There are a lot of things we can only do reactively,” he said.

“We are dealing with ISPM-15, COVID-19, geopolitical instability, the election, a trade war with China. … There are a lot of moving parts,” Schultz said. “Many have said, ‘It’s survival of the fittest.’ We have to adapt and see what 2021 and beyond have in store. Will we be wiser in three months, or after a vaccine is available? Will we go back to what we’ve seen before, or is this new territory?”

Added Wattman, “If 2020 has taught us anything, it’s that we are vulnerable.”