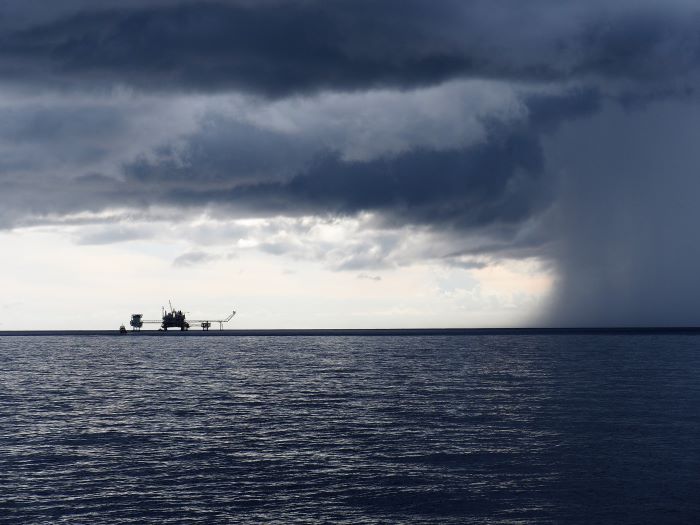 A storm gathers over an oil and gas platform in the Gulf of Thailand. Photo credit: Shutterstock.com.

Project owners working at the upstream end — exploration and production — of the oil and gas industry have announced billions in cuts to planned capital expenditures, sending tremors through the project cargo logistics supply chain.

Even more than the chaos of the COVID-19 shutdown, this is bad news for engineering, procurement, and construction (EPC) companies, multipurpose/heavylift (MPV/HL) carriers, and the rest of the project logistics supply chain. Oil and gas-related projects, and the complex cargoes they engender, are the sector's bread and butter.

There's little visibility into precisely which upstream projects will be shaved down, Pritesh Patel, executive director, Upstream Costs and Technology, IHS Markit, told JOC.com, but anything that was going to reach final investment decision this year is “off the books” — including projects sanctioned during the first quarter, he said. Projects sanctioned in 2018 and 2019 should continue, but are likely to be delayed.

Affected project owners include national oil companies (NOCs) such as Saudi Aramco and Petrobras, and international oil companies (IOCs) such as ENI, Shell, DNO, and Total, according to IHS Markit, the parent company of JOC.com. Oil field service providers such as Halliburton and Baker Hughes, already hit hard, have announced layoffs, according to IHS Markit.

An unprecedented decline in oil demand lies at the heart of this capex crunch. “I have never seen anything like it before in terms of its depth,” said Jim Burkhard, vice presidentof Global Oil Markets, Scenarios, and Integrated Services with IHS Markit.

Demand collapse in the second quarter of 2020 is expected to be six times larger than the previous record-breaking contraction of 3.5 million barrels per day, which happened during the first quarter of 2009, as the 2008-2009 financial crisis decimated the global economy.  The stay-at-home measures intended to slow the spread of COVID-19 “really hit at the heart of oil demand,” Burkhard said during a JOC project and breakbulk cargo webcast last month.

As stay-at-home measures are eased, and assuming any return of COVID-19 is contained and managed, year-on-year demand growth could return, Burkhard said. However, that growth would be relative to 2020's decline, so still below 2019 levels. And as demand returns, a first order of business will be to work off a massive oil inventory overhang that is north of 1 billion barrels globally. This will “act as a source of supply for a year," Burkhard said, impacting upstream spending through 2021 and perhaps longer.

IOCs and NOCs will still make major investments. The question is how soon, Patel said. Falling oil storage levels will be a leading indicator that capex might start moving again, he said. Then, “we'll see activity and investment as oil companies realize they will see future demand,” he said. Growth in front end engineering design (FEED) projects and work backlogs will also be good signs. However, if the coronavirus returns in force as stay-at-home orders continue easing, that could easily trigger a “W-shaped,” or double-dip recession that prolongs the demand downturn, Patel said.

“There's going to be a great deal of caution coming out of this,” Burkhard said. “No one would have believed it if someone from the future told us last year, 'Oh, oil demand’s going to fall 22 million barrels per day in the second quarter.' Decision makers in general are going to be less confident … This scarring experience will create caution about investing fresh capital in new projects.”