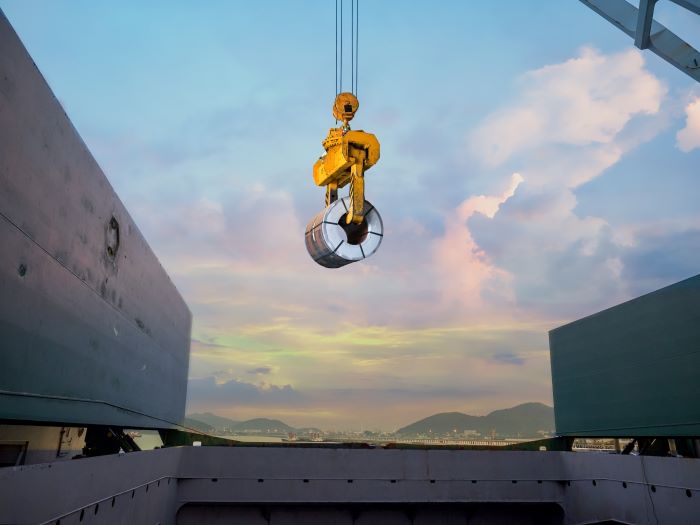 A steel coil is lifted from a vessel’s cargo hold. Jitters are increasing in the multipurpose and heavy-lift shipping sector. Photo credit: Shutterstock.com.

Project forwarders and engineering, procurement, and construction companies appear confident about the project market through the end of 2019, but jitters are increasing in the multipurpose and heavylift (MPV/HL) shipping niche.

Business uncertainty, driven by the US-China trade wars, Brexit, and a slowing global economy, is affecting the sector, except for a few pockets of activity, Oatway said. Those pockets include construction in India and the Middle East, some Chinese Belt and Road projects, and a couple of large oil and gas projects in Africa. But those may not be enough to keep the fleet going, she said.

The MPV/HL niche is disparate and can be difficult to pinpoint. As Drewry parses the fleet, the approximately 3,000 vessels that make it up range from high-end “premium” carriers with combinable lift capacities of 350 metric tons and higher, to older, smaller ships with no gear or as little as a 50 metric ton lift cap. These ships carry a wide variety of dry bulk, breakbulk, and project cargoes. Some are in short-sea trades and some are ocean-going trampers — sizes range from 8,000 to 17,000 deadweight tons (dwt), with a few ships as large as 30,000 dwt. The market is privately owned and opaque, according to Oatway. “You don’t see rates, and you definitely don’t see forward rates,” she said.

These smaller, older ships are often trading short-sea and in “less pressured” environments, Oatway said. There’s no iron ore hitting the tanks, they are using their own gear for lighter cargoes, and they are not carrying high-value project cargo. Additionally, there have not been any of the dreadful accidents seen with over-aged vessels in other trades, so shippers are not shying away. Meanwhile, the premium ships hit an age barrier when project cargo owners cannot get cargo insurance.

“Once the shippers say, ‘We aren’t putting our cargo on a 20-year-old vessel,’ that leads to higher demolishment,” Oatway said.

While MPV/HL carriers such as Zeaborn and BBC Chartering are talking about building new, more efficient ships, i.e. “eco-traders,” a key question affecting the fleet is what happens to the old ships, Oatway noted. Will they be demolished or sold into the second-hand market?

Does this older, smaller wedge of ships hold down rates for the MPV/HL sector overall? Oatway believes they do. The AALs, BBC Charterings, Zeaborns, Thorco Projects, and Rickmers-Line around-the-world services might carry steel, bulk, and project cargo, while the older, smaller ships may only be carrying breakbulk steel, Oatway said, “but they are still competing on a breakbulk level.”

“If you have a shipper looking to put steel pipe on board, he has a whole range of ships to choose from, and if he doesn’t have to put it on a smart ship and pay that price, he won’t,” she added. “So there’s that trickle-down effect.”

Theoretically, premium ships should be in a world of their own — but then why aren’t they getting the rates they want? The multipurpose sector competes within its own fleet as well as with the container and roll-on, roll-off carriers, Oatway said. “It’s like a whole series of shipping Venn diagrams,” she said.