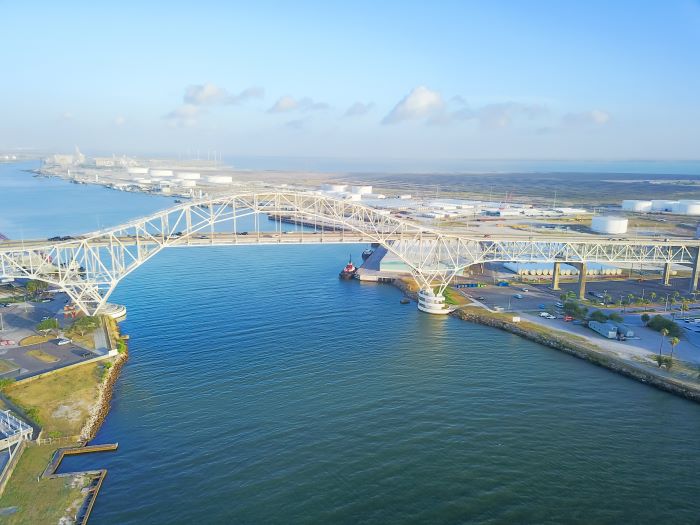 Construction will begin in the third quarter of this year on a $10 billion petrochemical plant near the Port of Corpus Christi, Texas, with completion expected by 2022. Photo credit: Shutterstock.com.

The ExxonMobil-Saudi joint venture (JV) building a $10 billion petrochemical plant near the Port of Corpus Christi in Texas is likely to spend anywhere from $120 million to $500 million on logistics costs, according to typical estimates used for similar-scale projects.

An informal survey of several experienced engineering, procurement, and construction (EPC) logistics executives and project forwarders, most of whom preferred to be off the record, revealed that estimating the logistics budget for any mega-project in the early stages is a difficult game. The traditional rule of thumb was 10 percent of procurement spend, but that has to be taken with a grain of salt in today’s project environment.

Construction will begin in the third quarter of 2019, with startup expected by 2022.

In mid- and late June, the JV let contracts to EPCs Chiyoda International and Kiewit for modular construction and transport of the ethane steam cracker, and to Mitsubishi Heavy Industries and Zachry Group for the two-train polyethylene unit, according to Oil & Gas Journal. The JV has let EPC contracts to Wood Group and to McDermott and Turner Group as well, but has not shared their details.

Traditionally, the average rule-of-thumb for procurement costs for a project such as GCGV is 40 to 50 percent of the total project budget, or in this case $4 to $5 billion.

Logistics spend can range from a very low 3 percent to more than 10 percent of the procurement budget. This includes every aspect of project transport: project forwarding contracts; transport on air, land, and sea, whether by barge, heavy-lift, plane, or container; ports, terminals, and stevedoring; and modules. All of this activity will be spread out between the project’s various EPCs and their service providers. For GCGV, then, the low end could be about $120 million, the higher end $500 million — a wide range, with reality likely to be somewhere in the middle.

The elements that will push up logistics spend include remote sites and a lack of regional equipment and talent, missing or inadequate regional infrastructure, many heavy-lifts or module movements, local content requirements, US-flag vessel requirements, and volatile fuel costs.

“You look at proximity and level of complexity,” said Doug Hickey, vice president of product services with Agility Global Logistics.

GCGV will possess some logistics advantages as it is close to a deepwater port in a region with good infrastructure and plenty of skilled service providers available.

Speaking during a panel on capital project sustainability at the Downstream 2019 conference in Houston in June, James Ellis, senior general manager for global engineering and project management with SABIC, said the JV’s construction would utilize a variety of strategies, including stick-build, module flatpacks, and large modules fabricated overseas and delivered to receiving platforms near the construction site. This delivery method will help alleviate impact to site neighbors and local infrastructure, he said.

Plans for the JV appear very similar to ExxonMobil’s Mont Belvieu (Baytown) project, completed in 2017, and would use the same EPCs and similar technology, said Joel Morales, executive director for polyolefins Americas and chemicals with IHS Markit, the parent company of JOC.com.

Another project cost variable lies in the nature of the contract with the project owner, said another industry executive. The two basic contract types are lump sum and reimbursable. Typically, with a lump sum contract the EPC controls how the job is done but cannot go back to the project owner with higher costs, so there is a built-in incentive to estimate and control spend more rigorously. With reimbursable contracts, the owner retains more project control, but the EPCs are able to go back to the well.

GCGV is another example of petrochemical and energy companies capitalizing on what is expected to be the long-term cost advantage of US ethane versus other feedstocks around the world, said Morales. The venture is “particularly spicy” because it’s Saudi Arabia’s first foray into the North American market as a polypropylene producer, he said. SABIC, a shareholder only, is taking advantage of ExxonMobil’s marketing expertise, he said. ExxonMobil will also operate the GCGV site.