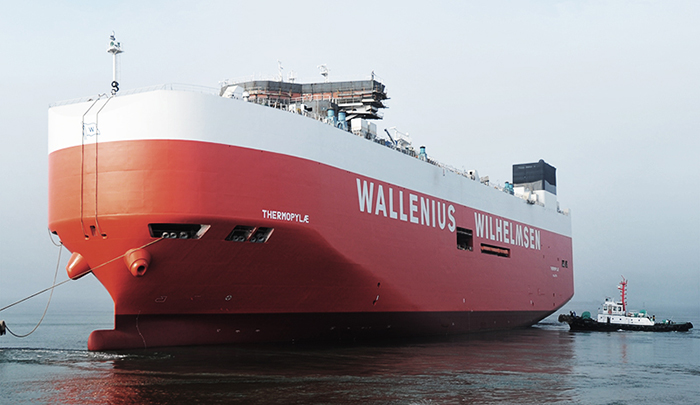 Roll-on, roll-off operator Wallenius Wilhelmsen Logistics is best known for its fleet of pure car and truck carriers and has owners with deep shipowning roots, but the company’s fastest-growing business is on land.

Since changing its name from the Wallenius Wilhelmsen Lines in 2005, Oslo-based WWL has expanded into marine terminals, equipment and vehicle processing and inland distribution. Those activities now generate $1 billion of the company’s $2.7 billion in annual turnover.

CEO Christopher J. Connell said Wallenius Wilhelmsen hopes to increase its land-based revenue to $1.5 billion by 2020. “I think we can do it,” he said in an interview. “We think it’s a good business to be in, and that we’re in a good position in that business.”

In April, Wallenius Wilhelmsen will open Melbourne International RoRo and Auto Terminal in Australia. MIRRAT will have more than 360,000 square meters of terminal space, 920 meters (3,018 feet) of berth length and capacity to handle more than 1 million vehicle units annually.

Connor said MIRRAT, an $80 million terminal developed from scratch, could be replicated elsewhere. He said it’s an example of Wallenius Wilhelmsen’s diversification into market segments that complement the company’s ocean transportation services.

Wallenius Wilhelmsen’s ocean transportation business operates about 55 pure car and truck carriers on 12 routes to six continents. The company is replacing several older ships with eight ro-ros designed with wider beams to take advantage of the new Panama Canal locks that will open on June 26.

Two of the new HERO, or Highly Efficient Ro-Ro, class ships entered service last year, four are being added this year, and two more will be delivered in 2017. The new vessels have beams of 36.5 meters, about 4.3 meters wider than WWL’s current Panamax ships.

With the opening of larger Panama Canal locks and introduction of its new ships, Wallenius Wilhelmsen will revise its service network to use the canal for vessels that now take a circuitous route from Europe to South Africa, to Australia and Asia and back to Europe.

Wallenius Wilhelmsen’s new ships are designed with decks, hatch openings and 330-ton-capacity ramps to handle high and heavy cargoes. Connor said these shipments are in a down cycle because of the global slump in mining activity that he doesn’t expect to end before 2017 or 2018.

Soft demand for construction equipment and other high-and-heavy cargoes has left Wallenius Wilhelmsen with about a 70-30 ratio of vehicles to heavy-lift shipments and wheeled shipments of breakbulk cargo. A mix of about 60-40 would provide the ships with better utility but, “We have to take what the market is yielding,” Connell said.

The decline in high-and-heavy shipments is cyclical, he said. “We’re continuing to look at the ways we operate our ships, and at our routings, to get better economies from the cargo we handle.”

Meanwhile, Wallenius Wilhelmsen continues to develop its land-based services, a market the company ventured into a decade ago in order to differentiate its offerings and create a new revenue stream.

The company’s land-based operations started small, with vehicle processors in Oxnard, California, and Brunswick, Georgia, and took a big leap in size with the 2005 acquisition of Nissan’s Distribution Auto Services subsidiary.

In addition to vehicles and rolling equipment, Wallenius Wilhelmsen carries wheeled shipments of breakbulk cargoes for which the company operates mainly as a port-to-port carrier. “With breakbulk, we’re less involved with pre-transport and onward transportation,” Connor said. “There are many forwarders out there who do a good job with that.”